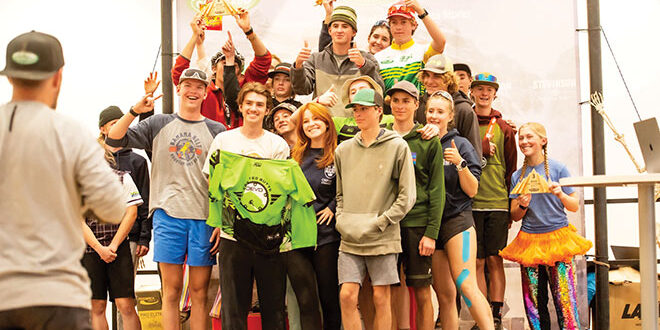 Thirteen years ago, the Crested Butte Devo high school bike team started with Torrey Carroll at the helm and a host of parents jumping in to help coach, ride with the team and wrench on their bikes. That same energy remained with Jenny Smith as the coach the past three years and it’s that energy, and the ability of the athletes themselves, that led to the team taking the Division 3 state title at the state championship in Glenwood Springs on Saturday, October 22.

The team flirted with the state title the last two seasons coming in third place both years. But this year they had a little something extra starting with seniors Katie and Piper O’Neill, Oliver White and Luca Loperfido. All four are known in the high school bike racing scene as “Legacy” riders, a title given to athletes who have raced all four years of high school. And the four riders finished their four-year career on the highest of high notes.

“We were all super excited to be there with the whole team qualified,” says Piper. “Everyone showed up to cheer for all the riders because that’s the sort of team we are and want to be. We were playing salsa music and Taylor Swift causing an all-together happy and excited vibe.”

The state championships were slated to cover two days at the Colorado Mountain College campus above Glenwood Springs but with an approaching storm, organizers made some last-minute adjustments to fit the weekend of racing into one day.

“They changed the course from a six-mile loop to a 4.5-mile loop to fit it all in and started races earlier,” says Smith. “It made for a very big day for the team, but I’d say most of the kids were pretty happy about it.”

The question then was, how would the Crested Butte team stack up against teams from the other three regions from around the state, and what the team needed to be in the mix.

“We needed a good day from everyone,” says Smith. “I thought there was a high probability that we could get on the podium, but everyone had to do well or else we’re putting pressure on the riders in the later races.”

The freshmen riders opened the day and while the CB Devo team didn’t have any riders in that class, Crested Butte’s Ty Nolan, who rides for the Colorado Rocky Mountain School, finished 10th overall.

Things then ramped up for the Devo team when the JV boys rolled up to the start with 180 riders split into two waves. Finn Veit won the regional title and was called up to the front with the other three regional champs for the start of their race wearing the title winner jerseys.

Veit punched his way into the top three from the start and was in the mix after the first of two laps. As the riders made their second and final lap, Veit stayed on the gas to pull away for good crossing the finish line 45 seconds ahead of his closest competitor to take the first individual state title ever by a CB Devo rider.

“That was awesome,” says Smith.

“The energy on race days is always super fun,” says Katie. “While we are sometimes nervous, watching your teammates race is always amazing. This year, watching Finn come down the hill in first with a sizeable gap to second place was so exciting.”

Conner Knight and Cy Davis lined up in the second wave of JV riders and finished middle of the pack in their wave, 93rd and 143rd overall.

“Conner had a really good race and Cy finished the season as the most improved rider by far for the season,” says Smith.

The sophomore race was when the Crested Butte team made their move in the overall standings as team scores were updated throughout the day. Sam Bullock led the sophomore contingent to roll to a sixth place finish with Kenny Bullock finishing in 22nd and Ebbet Weinberg coming in 51st place. Sam’s result was enough to rack up points for the team and push them into first place with the varsity races left to go that afternoon.

“They did great and all of those boys are racing awesome,” says Smith.

CB Devo had five riders in the varsity races with Katie and Piper in the girls race and Lance Lakoski, Oliver White and Luca Loperfido lining up for the boys.

Lakoski has had a tough season in first year racing varsity with a crash early in the season and an illness sidelining him for another race. Nevertheless, Lakoski rallied his way through the masses to cross the line in 45th place and score additional team points. White closed out his four years of high school racing with a 70th place finish and Loperfido was close behind his teammate in 72nd place to wrap up his four-year commitment to the team.

“Lance still has another year and he is super-motivated for next year because he had such a rough season this year,” says Smith.

It was Piper’s second year as a varsity rider while Katie made the jump to the varsity class in her final year of racing for CB Devo and the O’Neill twins sealed the deal for the team in the girls’ varsity race.

Smith admits the three-lap format of the varsity races is tough and after two laps can turn into a war of attrition in the third and final lap.

“On the first two laps everyone is a lot closer together but for everyone outside of the top five, it ends up being a sufferfest,” says Smith. “I don’t feel like any of them ‘races’ that final lap.”

Piper and Katie proved that they could hurt a little more than a lot of the other riders with Katie staying strong to finish 38th and Piper placing 42nd to score vital team points and seal the first ever team state title for CB Devo.

“To wrap up this year with a state title was amazing,” says Katie. “It is the first time in Devo history that we have ever won state overall or had an athlete win states, so to have both in one race was incredible. When the seniors this year first joined as freshmen, we brought with us a new sense of hard work. In our freshman year, Devo placed third overall at states. We could continue to improve as our team was shaped and grew into a team of hard work. To finish our high school career, winning three division races, regionals, and the state as a team was incredible to see our hard work pay off.”

“They’ve both gone through such a great progression over the four years and they’re such a big influence on the team,” adds Smith. “They’ll be sorely missed.”

In the end, Smith attributes the success of the program over the years, and specifically this year, to the energy on and off the racecourse.

“The reason they’re doing well is because they’re a really good ‘team’,” explains Smith. “They come to practice, they’re organized, they support each other and get great support from the families. The win is a biproduct of the fact that they’re an awesome team.”

Piper has a slightly different, yet still similar take on the secret to their success.

“Finn got his appendix removed and we attribute all our success to that,” she quips. “The female and varsity points are also super important to success because they’re weighted higher and due to the lack of females in the sport, their points are higher. As well as having good points, we have fun in training making the riding enjoyable and giving us the ability to push ourselves and train hard. Jenny is a phenomenal coach who really knows what she’s doing, allowing us to succeed. A team is only as successful as the coaching they receive.”