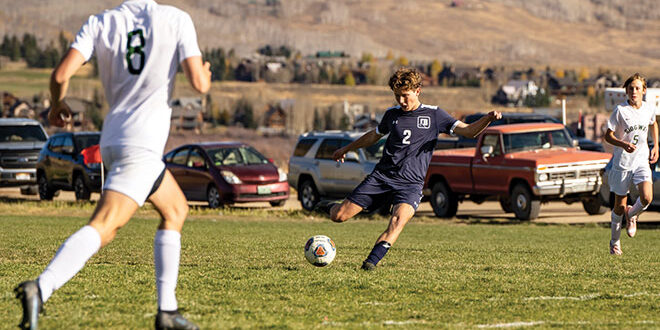 After closing out the regular season with wins over the Ridgway Demons and the Telluride Miners, the Crested Butte Titans boys’ soccer team won the league title and are headed to the state tournament as the fifth seed out of 16 teams.

Questions about the Titans’ preparedness were on the minds of the coaching staff as they were coming off a week without workouts heading into the final week of the regular season.

“We expected our players to be a bit rusty and out of shape, needing to get back into game speed, end of season intensity and pace and knowing that the other teams we were to face had an extra week of training with no interruptions,” says coach Bob Piccaro. “So, a double negative.”

And the Titans proved to be a bit rusty in the first half against Ridgway on Thursday, October 20 as the Demons’ midfield was on point with their work rate and technical ability. Meanwhile, the Titans’ passing was off a touch and several players looked winded early in the game.

They did manage to strike first though as a quick transition had the ball at Blue Gardner’s feet and Gardner turned to play a perfect cross to Jacob Bernholtz behind the Ridgway defense and Bernholtz tucked the ball past the Demon keeper.

The lead barely lasted though as Ridgway continued to push on the Titans and scored two goals in response to take a 2-1 lead into halftime.

Crested Butte took the break to regroup as a unit and came back out in the second half noticeably refreshed. Meanwhile, the Demons started to taper off as they had only three subs on the bench to choose from and were tiring as the game progressed.

The Titans tied the game up nine minutes into the second half as Gardner finished off an assist from Jamis Matlock. Six minutes later the two players traded roles as Gardner assisted Matlock for a 3-2 Titans’ lead. After another six minutes, the Titans struck again when Marin Gardner stretched on a cross from Colm Piccaro to ping a shot off the post and in and then Kaiden Marziano finished it off as he got on the end of a corner kick from Marin to find the back of the net for the 5-2 Titans’ win.

“I think they just got their second breath, which is stronger than your first, especially after a gap in training,” says Piccaro. “Strategic subbing in the first half helped as our players were fresher in the second half and wore them down as their bench was not as deep, and we took control as well as improved our touch and working the ball to the flanks and attacking from outside with some good crosses that were converted to goals. Our train got rolling.”

Crested Butte then headed to Telluride for the final game of the regular season and a league title on the line as a win would secure the title, a loss would leave it up to a tiebreaker.

Telluride came out like they always do on their home field with constant pressure all over the field looking to disrupt the Titans’ energy. The effort was successful as they had the Titans embroiled in a back-and-forth battle until a pass from Matlock between two Telluride defenders fell to Bernholtz in full stride and Bernholtz finished it off for a 1-0 Titans’ lead at halftime.

“It was a gritty, hard fought, physical game, just like we expected from them, but we were still able to build a 1-0 lead,” says Piccaro.

The Miners came out in the second half shifting into an even higher gear and had Crested Butte scrambling. Their effort paid off as they tied the game 1-1 and as the clock wound down, it appeared the game was bound for overtime. A small shift in player positions by Piccaro with 10 minutes left in the game ultimately bore fruit though as Marin’s effort in the middle allowed Piccaro to push Nathan Sawyer wide to get the Titans some composure on the flank. That was the final key ingredient as Sawyer laid a pass down the line to Bernholtz and Bernholtz turned to find Matlock open at the top of the 18-yard box with a low pass. Matlock drove his one-time shot to the low corner past the Miner goalie and the official blew his whistle calling the end of the game securing the 2-1 Titans’ win.

“We were able to hold off some serious pressure, as they wanted to take us down, but we again showed that we know how to win and keep our composure and play our game until the last second,” says Piccaro. “Those two wins got the team back on track. The team is hungry to continue on after two tough battles. Rust is knocked loose and it’s time to attack.”

As the fifth seed, the Titans are on the road for the post season. They open the state tournament in Loveland against Skyview Academy on Friday, October 28. If they win that first round match, they advance to the quarterfinals on Saturday, October 29 to face the winner of the Loveland Classical/Manual game.