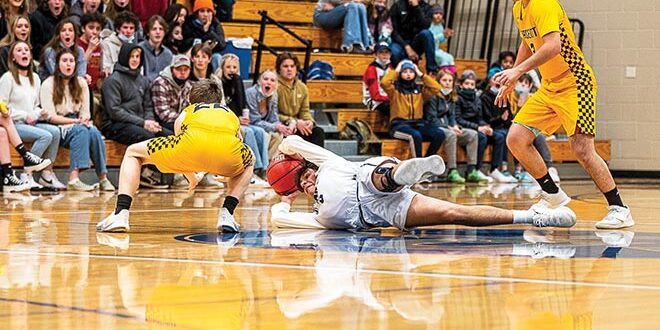 Last year started off rough as injuries wreaked havoc on the Crested Butte Titans boys’ basketball team while their new coach Hannes Gehring was bringing the entire team up to speed on his schemes and expectations. They dropped five of their first six games as a result but once they returned to full strength and schemes were in place, the Titans won 11 of their final 13 games, finished in second place in the highly competitive Southern Peaks league with a record of 7-1 and made it to the state tournament before getting eliminated by Peyton High School.

“We overcame some obstacles and eventually hit our stride and had a great year,” says Gehring. “We got to see who we really are during that 13-game stretch.”

Gehring is back again at the helm this year and while the team lost six seniors, including four starters, to graduation, he has similar numbers this year including five seniors, eight juniors, three sophomores and a big freshmen class of seven players.

As is often the dream of any high school coach, Gehring did provide plenty of chances for his players to get training in over the summer and during the fall but with a lot of them multi-sport athletes, consistency was hard to come by.

“We had a core group getting in the gym, but you always just wish you had every kid in the program in the gym,” says Gehring.

Once they officially started on November 14, the energy was high and the team was excited to get down to business, including Gehring’s focus on fitness as the foundation for success.

“When a player gets tired, you can see bad habits start to emerge,” says Gehring.

But illness hit the team early and hard and as preseason workouts continued, including a scrimmage with Gunnison, Gehring’s team had dropped from over 20 players down to two players.

“When we had a full group, the ‘vibe’ was really positive,” says Gehring. “But it’s been spare times at practices. We just haven’t made the progress the first week that we typically have. I guess the silver lining is better to have that happen now than on a week we have two or three games.”

And while several players are returning from having a season under Gehring leaving some overlap in place, there are some new players to the team that will have an impact at the varsity level that need to be brought into the systems in place.

“That’s a big chunk of 10 players that will see significant time,” says Gehring.

Regardless of the early season setback, Gehring and the available players continue to press forward knowing that once everyone is back, the team should see rapid improvements both in fitness and in their play.

“They’re a competitive group of kids and we will hit our stride,” says Gehring. “Hopefully we can turn it around and make quick progress. I look forward to when the kids are at their full capacity physically.”

The Titans open on the road against Telluride on Friday, December 2 and then play their first home game on Tuesday, December 6 when they host North Fork. As for their league, it will be just as competitive as it always is.

“The league will be really similar, but I don’t see why we wouldn’t shoot for winning the league,” says Gehring. “We will have our work cut out for us every night. But there’s a unique culture to this team, a special dynamic, that can take a good team and make it a great team.”