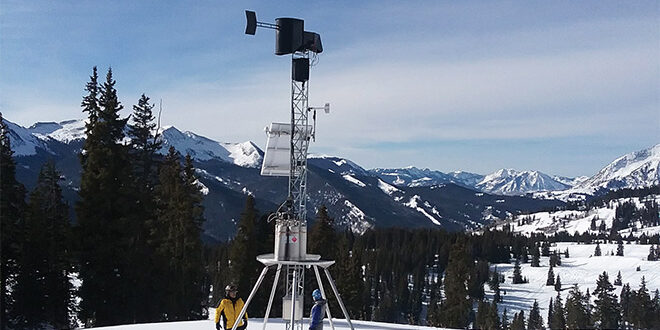 The Upper Gunnison River Basin’s cloud seeding program that spans from Lake Irwin to the peaks around Blue Mesa Reservoir has been adding heft to winter snowstorms for more than 20 years and is now looking to add more. The program is adding a new remote generator to its operations, and the Upper Gunnison River Water Conservancy District (UGRWCD) is seeking new funding partners for the program to battle persistent drought and low reservoir levels.

The Upper Gunnison Basin Cloud Seeding Program started in the 2002/2003 winter season, following a feasibility study the year prior funded by Gunnison County in response to significant drought in 2002. After the program’s first year, the UGRWCD took over and in the time since it has grown to 15 generators, on both public and private land. The UGRWCD wants to add more generators in other qualified locations, starting with one on private land on Black Mesa.

According to the UGRWCD, cloud seeding is one of the cheapest forms of augmentation water for the river basin at an estimated $0.53 per acre-foot annually. And it can provide critical water to support Gunnison River basin flows, Blue Mesa Reservoir and the local economy.

The Colorado Water Conservation Board gives anywhere between $67,000 and $94,000 and the UGRWCD covers the remaining $20,000 to $45,000. Chavez says that program costs are increasing, however. “We are adding a new generation site, and we are going to be looking for new funding partners,” she says.

North American Weather Consultants (NAWC) operates the cloud seeding program for UGRWCD and for many other areas in Utah. It has also operated programs in southern California since the late 1960s.

Cloud seeding cannot create a snowstorm, but it can increase the precipitation from a storm that already exists. Cole Osborne, project meteorologist for NAWC, explains how the process works using manual and remote-controlled generators and propane tanks to blast a mix of silver iodide and sodium iodide into the atmosphere.

“The solution attracts liquid particles in a cloud, and the water molecules develop into ice crystals…so you can speed up the process and make a cloud more efficient at producing precipitation,” he says.

“When a storm comes in, we look at specific criteria. We don’t seed every storm that comes by,” says Osborne.  The solution works best at temperatures ranging from -5 to -15 degrees Celsius, and at elevations of about 9,500 and 10,000 feet. “So as the cloud deck rolls in, we are looking at temps in that area and higher up in the atmosphere. We look at wind direction, since we don’t want the wind blowing away from the target. We look at how much precipitation or liquid is going to be available,” he says.

When a storm meets the criteria, operators simply turn on the propane and light a burner with a windscreen, similar to a barbeque.

“There’s no odor, no fumes; it’s a completely clean burn other than the bright orange flame,” describes Osborne. “This is all taking place on a microscopic scale. The solution burns and the heat moves it up. No harmful impacts or residue have ever been found. And it is taking place over a very large target area.”

Most generators in the Gunnison Basin are placed on private property, by NAWC or the UGRWCD reaching out to individuals with ideal locations to see if they are interested in participating. “Right now we have 14 of them spread all over from north, northwest, northeast, southeast and the south across about 45 miles,” says Osborne.

Only two sites are remotely operated, including one by Lake Irwin. NAWC and the river district have an agreement with the individuals where the manually operated generators are located, and Osborne says when a storm looks good, they give a call to fire things up.

At the end of every winter, the river district collects snow telemetry (SNOTEL) data and river water data, comparing it to other similar sites without cloud seeding operations. On average the cloud seeded areas show a 5- 8% increase in snow water equivalent (SWE), “which is a massive amount of water,” says Osborne.

The UGRWCD and NAWC believe a remote generator placed at Black Mesa between Crested Butte and Gunnison will do more than any other program enhancement, in terms of water augmentation in the Gunnison Range and to Blue Mesa Reservoir. The UGRWCD, with financial assistance from the Colorado Water Conservation Board, has decided to fund the initial set-up and infrastructure costs for the remote generator for approximately $67,600.

Osborne says there’s a huge area they are trying to target to lead to increased spring runoff and rises in reservoir levels.

According to a memo from the UGRWCD earlier this month to potential funding partners, “NAWC analysis indicates that the generator will have significant direct benefits to northern and southern tributaries to Blue Mesa Reservoir and to eastern tributaries due to positive downwind cloud seeding impacts. The remote generator would permit cloud seeding during almost all storm periods that impact the Upper Gunnison River watershed. Seeding could occur during periods with winds ranging from northerly to southerly.

“Additionally, as this generator would be located at 9,500 feet, it will be in-cloud, meaning that 100% of the seeding solution released will make it into the storm system. The generator will be well above any inversions that occur during the winter months, and uninhibited in its ability to seed storm systems. The Remote Generator also releases 2-4 times the concentration of seeding solution as our manual generators, greatly augmenting the impact of a single site location,” according to the memo.