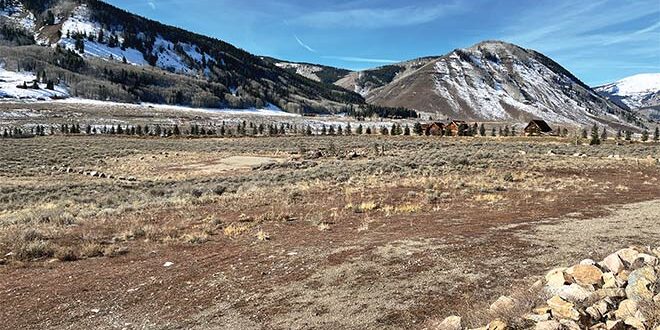 While being very clear Monday at the town council meeting that “no commitment” or definitive decision was being made for Crested Butte to extend water and wastewater services to Gunnison County’s proposed Whetstone affordable housing project located near Brush Creek Road and Riverland, the CB town council was willing to continue walking down the path of “considering” the idea. That meant taking a formal vote at the November 21 meeting and asking the staff and applicant to set in motion the collection of more detailed data on what would be involved in such a partnership and endeavor. That vote passed unanimously 5-0 with two councilmembers absent from the meeting.

Whetstone is currently going through the county’s sketch plan review process, and a utility plan is required at the subsequent preliminary plan submittal. The county has determined that for a number of reasons including cost and timing, having the town supply municipal water and wastewater infrastructure is the best of three potential alternatives that included building and operating a private facility onsite or tying in with the East River Regional Sanitation District.

With this formal vote of consideration, the county must now complete a detailed engineering feasibility study. As part of the consideration approval, the town also made clear it could consider annexing the property; would mandate that at least 80% of the currently proposed 231 units would be deed restricted with 40% serving households below the 120% Area Median Income (AMI); that CDOT realign the Brush Creek intersection to include a single lane roundabout along with relocated RTA bus stops and build a pedestrian underpass coordinating the housing with the bus stops. The need for a strong transit element in the proposal was emphasized to the county, and it was made clear that the utility extension “shall only occur upon CDOT’s approval of the project and inclusion in the agency’s five-year work plan.”

The town also was explicit that before any official decision is made on whether to extend the utilities, a “robust” public engagement process outlined in the Community Compass would be held. Staff also pointed out the public would have the opportunity to comment if the idea got to the point where the town code would have to be amended to handle such a large extension of utilities.

“No decision is being made tonight,” emphasized Crested Butte community development director Troy Russ. “This is just acknowledging that council will consider the idea. We have been working with the county and we think the transportation element is strong and very important. They say they would like to see horizontal construction beginning in 2024 and take three-to-five years to build out the housing.”

“If the council agrees it is open to extending utilities, you will be sending the county back with a whole lot of homework,” added Crested Butte Public Works director Shea Earley.

Councilperson Mallika Magner wanted to be sure the council wasn’t stringing along the county by not being definitive with a decision. “Unlike some previous situations, I want the town to be transparent and not have them feel like we just changed our mind later,” she said.

“There is a whole lot more to do before council can make an informed decision,” said Russ. “This is a natural risk of any developer.”

“There are a lot of potential pitfalls that we don’t know right now,” added town manager Dara MacDonald. “It could come in $5 million more than we think. Everyone has the best intentions, but we need to gather the detailed information.”

“There are things we can’t control but we can control the message we give to our valued partner, the county,” said Magner.

“Nothing is yet set in stone. There will be a robust public engagement, correct?” asked councilwoman Beth Goldstone.

“Yes,” said Russ. “Using the Compass process is very important in this case.”

“If the county wants to be constructing horizontal buildings in 2024, what timeframe are we looking at?” asked councilwoman Anna Fenerty.

Russ said just gathering the engineering data was probably a six-to-nine-month process, but he said public engagement could be happening at the same time. “Again, there is risk involved,” he said.

“The reality is that just because we don’t participate doesn’t mean the project doesn’t happen,” noted mayor Ian Billick.

“We feel good about partnering with the town for the initial study,” commented county commissioner Jonathan Houck. “There are still lots of questions. Our one purpose is to be a collaborator with the housing issue in the valley and see if something can work. This will take time, but infrastructure is critical.

“We are shoulder to shoulder with the town when it comes to working to get CDOT on the same page with the Highway 135 recommendations,” Houck continued. “We need to plan for what is coming.”

“We have a long process in front of us,” added assistant Gunnison County manager for operations and sustainability John Cattles. “We understand there is risk, but we want to eliminate as much risk as possible. The plan is to put out a request for proposals and bring a developer on board in late spring. As for the potential for annexation to town? We aren’t prepared to discuss that right now.”

Assistant Gunnison County manager for community and economic development Cathie Pagano said the county was evaluating all options and the town extension of utilities was the best choice based on several considerations. “It’s not just cost,” she said. “Other factors are being considered.”

Cattles indicated the hope was that the county might perhaps get a break on future tap fees given the affordable housing nature of the project.

“There are a lot of unknowns at the moment,” said Earley.

Councilwoman Gabi Prochaska said one of her main priorities would be to make sure CDOT was on board with the town and county transportation planning. “I feel like transportation is huge and can mitigate impacts to town. I want someone without a car to be able to live in that development from day one,” she said.

“The town council needs to get comfortable with a strategy and we aren’t there yet,” said Billick. “We need a robust process to get there.”

“The question in front of you tonight, given technicalities with language in the town code, is does the council want to ‘consider’ a utility extension,” said MacDonald.

Town attorney Karl Hanlon explained that to basically “trigger” additional data collection, the council needed to vote on being open to “consider” the concept. The accompanying initial conditions was an indication of some important elements to the town.

“Basically, this says we are comfortable considering the idea without committing to anything and we want robust public participation,” said Billick.

The five councilmembers at the council meeting, Billick, Magner, Prochaska, Fenerty and Goldstone all agreed to slowly guide the plane down that 10,000 feet to get more details and keep heading toward the Whetstone landing zone.