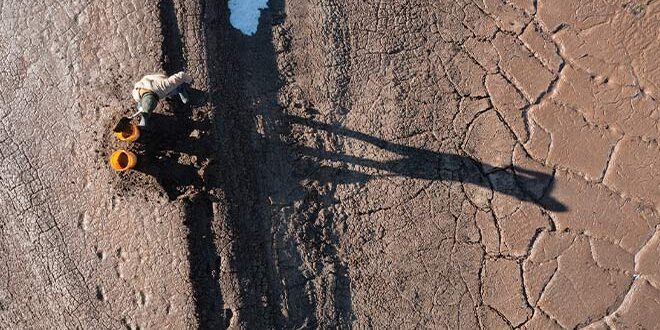 As far as innovation goes, Christopher Caskey and his company Delta Brick and Climate Company have hit on many levels by creating solutions to environmental challenges while producing something beautiful, sustainable and useful. The company and its newly formed sister brand, Particular Tile, produce bricks, pavers and custom tile using clay sediment removed from Paonia Reservoir, helping maintain the reservoir’s water storage capacity. But the company started in response to a different mission: capturing methane from abandoned coal mines. If things go well, captured coal mine methane will soon be used to run the kilns Delta Brick uses to fire its clay products. That final aspect of Caskey’s plan might start as early as next summer thanks to a grant Caskey received in November from the Colorado Office of Economic Development and International Trade.

In 2018, Caskey and other stakeholders were brainstorming ways to use the methane leaks from North Fork Valley coal mines rather than letting it all continually enter the atmosphere. Coal mines have operated there since the 1890s and vent the potent greenhouse gas to prevent underground fires. According to Caskey, methane venting has climate impacts 84 times higher than carbon dioxide.

Caskey has an extensive science background as a former research assistant professor of chemical and biological engineering at the Colorado School of Mines, scientist at the National Renewable Energy Laboratory and materials science consultant. His interest in climate science and energy informed the move into entrepreneurship, with the idea to help remove sediment from Muddy Creek filling up the Paonia Reservoir and power his kilns using methane energy. The business incorporated in 2018 and a factory in Montrose opening at the end of 2019.

The company has grown in the past three years, with a steady routine of collecting clay from the reservoir in October when the water levels are lowest and the clay dries out. Caskey says the company makes use of that harvest for the rest of the year to produce its clay products.

The clay is high quality to begin with, says Caskey. “We don’t have to take anything out of it; we do try to avoid rocks and roots. Then we add a material called grog that’s basically sand but with low quartz content. We mix that up, add some water and do a process called extruding—basically a big playdough fun factory that sucks the air out of the clay and pushes it through a shaped opening. So if we’re making tile we get a ribbon of clay from that and use what’s basically fancy cookie cutters to punch out the shapes. We stack them up and let them dry.”

The forms go through a bisque fire at almost 2,000 degrees Fahrenheit. “That’s when we get the beautiful red terra cotta color,” says Caskey. Then the forms get glazed for a second firing and the final product is shipping nationally, from New York to Alaska. “But we’ve sold the most here in Colorado which is where we advertise and benefit from word of mouth,” he says.

Just a few years in, Delta Brick has already started breaking even and sometimes turning a slight profit.

“We stopped losing money in the spring of 2022,” quips Caskey. He says there is no danger of ever running out of clay to use.

“Unfortunately, there’s no point at which we’ve solved the problem,” he says of the sediment in Paonia Reservoir. “Muddy Creek lives up to its name; A lot more clay comes in each year that what we take out, by a factor of about 10,000. So we’re only slowing the problem, or pointing the way to reducing the problem.”

But he does have ideas about how to use more sediment in the future through methane capture. Caskey lives in Paonia, and says production is outgrowing the factory in Montrose.

“The whole vision is that we want to power the factory with waste methane leaking out of an abandoned coal mine somewhere outside of Paonia,” says Caskey. He has a few prospects for moving the factory to Paonia, although nothing is confirmed yet.

In one mine he has his eye on, Caskey says there are between three and eight places where the mine is leaking methane. “The goal would be to seal up those leaks as best as you can and put a pipe into the mine void to draw the gas out. We could seal those leaks and around the pipe using grout, so that would use a large amount of clay.”

Caskey says it is a fairly new technology, but he is ready to jump in.

“Methane capture is not something we’ve done in the U.S. a lot so we don’t have a lot of expertise. The exact geometry and techniques tend to be all different.” He describes another technique using a grid of perforated French drainpipes that branch together and are covered with sheets of plastic.

“We’d like to start doing our own methane capture project in summer 2023,” he says. “We will experiment, but we’re assuming the experiment works. At least a little bit.”

Last, the climate side of Delta Brick and Climate Company is also looking at how to capture steam from burning methane and produce relatively large volumes of clean water for a thirsty food producing region such as the North Fork Valley.

“Methane (CH4) is a hydrocarbon,” he explains. “When you burn a hydrocarbon, including gas, you make carbon dioxide and water (dihydrogen monoxide, or H20). That’s why you see steam coming out of a car pipe on a cold day.

“We’ve got this methane that is leaking. When we burn it for our tile, we had a successful previous pilot project where we put it into a heat exchanger…and the steam collects into liquid can make a few hundred gallons at a time.”

Caskey’s goal is to aid in the energy transition from fossil fuels to renewable ones and create future job security for workers in the industry. His vision of solving many problems and also producing things has so far been quite successful, with previous grants from Gunnison County, Delta County, State of Colorado Department of Local Affairs, Colorado Water Conservation Board and Colorado Department of Public Health & Environment and additional support from private ventures. The company also completed the ICELab accelerator at Western Colorado University.

The latest grant of $250,000 was awarded November 17 by the global business development division of the Office of Economic Development and International Trade (OEDIT). Grants went in various amounts to 32 Colorado companies and eight researchers through OEDIT’s Advanced Industries Accelerator Program, to “promote the growth and sustainability of advanced industries in Colorado by driving innovation, commercialization, and public-private partnerships that move this vital aspect of Colorado’s economy forward in communities across the state, from Aurora to Penrose and Buena Vista to Paonia,” according to a press release from the OEDIT.

“The state grant will help us hire some new people, and one new employee will help with the project of moving the factory from Montrose to Paonia. We are extremely grateful to the state agency and the many, many volunteer judges and to the tax payers for taking this chance on us,” says Caskey.

“It’s great to actually be making stuff. In western Colorado we’ve got a lot of skills in oil and gas, etc. We can redeploy some of those skills into the manufacturing industry too. I think it’s part of the economic transition that we should strive for.”