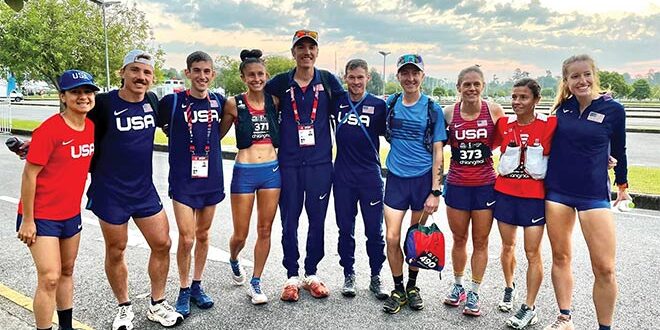 “I definitely left it all out there for team USA”

Stevie Kremer and Cam Smith headed to the Far East to compete at the World Mountain and Trail Running Championships in Chiang Mai, Thailand last weekend as part of Team USA. Kremer placed 13th in the short trail race and helped Team USA to a silver medal finish in the event while Smith placed 20th in the Uphill Mountain race with Team USA just missing the podium coming in fourth place.

Kremer was a last-minute addition to Team USA having stumbled across an application opportunity online to join the team in Chiang Mai. Given her successful career before taking a hiatus from competitive racing, results in regional trail running races in the past year and her result and course time from the Pikes Peak Marathon last year, Team USA selected Kremer to join them at the World Championships to compete in the short course race, a bit of a misnomer given it was still 40 kilometers long.

“I guess compared to the long course of 80 kilometers it is short,” says Kremer.

In classic Kremer fashion, joining the team was last minute and the buildup prior to the race quick. She left Wednesday morning to catch a flight in Denver to Los Angeles. Then flew from Los Angeles to Seoul and Seoul to Bangkok arriving Thursday night only to wake up early Friday to catch a flight to Chiang Mai at 7 a.m. for her race Saturday morning at 7:30 a.m.

Smith qualified for Team USA by winning a pre-qualifier race earlier this summer and was picked to run the uphill race for Team USA. He left a little more room for himself than Kremer on the front end arriving in Chiang Mai a week before the race.

Given Kremer arrived a little under 24 hours before her race, there was no time to preview the course. Instead, she relied on info from a friend who had been on the trail before, just not recent to the race. Therefore, Kremer also relied on some updates from her Team USA teammates.

“A friend of mine said it was the muddiest trail she’d ever been on,” says Kremer. “I understood it would be muddy with sticks and divots. I also got texts with pics of the trail, the team was awesome.”

Once she lined up though, concerns for mud were soon removed as the typical dry season in Thailand was just that, and she found the trail in great shape, but tough.

“For a middle to upper aged person with low sleep it was brutal,” says Kremer. “And it was so hot and humid, I never drank so much water, it was crazy. The trails were cool though, super steep up and super steep down.”

Kremer ended up finishing the race in 13th overall and helped pace Team USA to a silver medal in the event. While she admits she was not happy with her own result, she was proud of the team’s silver medal.

“I went in wanting to do well individually and help the team podium,” says Kremer. “Honestly, I’m not happy with 13th but I am happy with the team silver and, all in all, it was a cool experience.”

Kremer took some time after the race for a tour of Chiang Mai, attended the medal ceremony and then headed straight for the airport to fly back arriving back in Crested Butte at 8 p.m. on Sunday.

“It was the longest stretch for the shortest time,” says Kremer. “I got a lot of frequent flier miles though.”

Smith jumped into the Classic Uphill event having never competed in a running race on the international level and was somewhat surprised, but happy, with the course.

“The course was great,” says Smith. “I didn’t know what to expect of the mountains in Thailand, and I was skeptical that they could be that spectacular since we started right in the city. But boy was I wrong. The climb was properly steep on beautiful trails, which keep going for over 5,000 vertical feet right from the city. There are some scary snakes to dodge but I tried to make sure I wasn’t in the front for safety.”

Smith finished the race in 20th place, second among the Americans, keeping Team USA in the medal hunt before they were eventually edged off the podium.

“I definitely would like to come back and improve on it in the future, but I think it’s the best I could’ve done on that day,” says Smith. “I definitely left it all out there for team USA. The whole experience was so special to me. I had a great time exploring a new part of the world and competing for our country. Thailand is filled with the most welcoming people I had ever experienced. And it was inspiring to see the U.S. do so well in other events. It filled me with pride to think about the hard work they had done to earn those medals and represent the U.S.”

Smith is now in France with thoughts of more running races and maybe even returning to bike races next summer. Until then though, it’s all about skimo as he will spend the winter in Europe training and racing on the World Cup circuit.

“I’m in France now and had my first ski day today,” says Smith. “Man, I missed it so bad.”