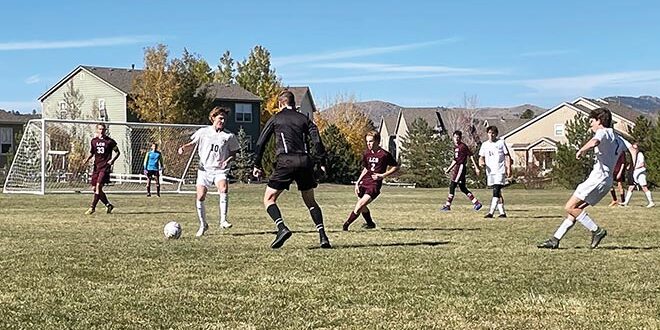 The Crested Butte Titans boys soccer team passed their first two tests of the post season taking down Skyview Academy 5-0 and Loveland Classical 4-1 Friday and Saturday, October 28-29 to advance to the 2A state semifinals on Saturday, November 5 in Denver.

As is always the case with playoff preparations, storms had the Titans mix in gym time, field time in Crested Butte South as well as a session on the Katy O. Rady turf field at Western Colorado University as they readied themselves to enter the 2A state tournament as the number five seed.

“The team was prepared both mentally and physically and eager to meet its opponent,” says coach Bob Piccaro.

Skyview Academy was an unknown to the Titans having never played them. But, being a Front Range program, Crested Butte expected a tough challenge and came out in the first half at warp speed.

They opened the scoring five minutes into the game when Blue Gardner headed in a cross from Ace Gaither. Skyview tightened things up on defense to hold the Titans off the next 20 minutes, but the Titans work rate then paid off as Nathan Sawyer buried a shot to the low corner in the 30th minute and Jamis Matlock dropped a pass to Kai Greene for Greene to punch it home for a 3-0 lead at halftime.

Gardner converted on a penalty kick 14 minutes into the second half for a 4-0 lead and then Joe Syson and Avi Narayana connected for the Titans’ fifth goal in the final minutes of the game to put the finishing touches on their initial post season effort.

“The game went well,” says Piccaro. “Crested Butte showed immediately that it was the better team, more skilled, conditioned and in game mode. We dominated the time of possession, out passed them and had some good through balls and our opponent could not penetrate our defense while our midfield ran themselves hard to control that key area of the field.”

The Titans then turned their attention to the Loveland Classical Lions who had cruised past Manual 8-2 in the earlier game with a style of play similar to Crested Butte, making for an interesting quarterfinal showdown.

“They were good, but we felt working the ball outside to the flanks would spread out their compact defense,” says Piccaro. “Also, we didn’t really get a gauge on how fast their defense was from the previous game because they controlled the ball most of the time, so we wanted to pressure their defense and see what happened.”

Both teams looked to set the tone for the game with a possession-based style of play, but Crested Butte had an extra step on the field led by Brendan Hartigan running rampant in midfield to break up the Lions rhythm. Meanwhile, Titan defenders Ace Gaither, Finn Ramsey and Otto Billingsley kept a close eye on Loveland’s top striker to handcuff his efforts every time he touched the ball.

After 25 minutes of back and forth battling, the Titans finally cracked the seal on the Lions’ net when Marin Gardner chipped a pinpoint pass through the Lions’ defense to brother Blue and Blue tipped it past the oncoming keeper for a 1-0 lead.

Ten minutes later the Titans struck again as Jacob Bernholtz sprinted onto a big clearing ball by Hartigan and fought off the Lions’ defender to tap it past the goalie for a 2-0 lead by halftime.

“The first half was a battle of sorts, two teams who play similar battling and trying to get the momentum edge,” says Piccaro. “Our passing and ball control was a bit better and we were grittier and started to wear on them. Our first two goals were an example of never give up and battle to the end type of play.”

Crested Butte then stepped up their effort another notch to open the second half scoring two goals in the first five minutes. Colm Piccaro played a low cross into the six-yard box and Jamis Matlock poked it in and then Bernholtz got on the end of a cross from Gaither to head home the fourth Titans’ goal dashing any chance at a Loveland comeback.

“Those early goals were huge,” says Piccaro. “It took the wind out of their sails and boosted our confidence in believing we were truly the better team that played with grit.”

Loveland connected for a goal down the stretch and had a penalty kick chance, but Titans’ keeper Joseph Sudderth made the save to deny the Lions any final say as Crested Butte sealed the 4-1 win and their spot in the semifinals.

The Titans will head to All City Stadium in Denver to face Vail Mountain in the semifinals on Saturday, November 5 at 12:30 p.m. Fans can watch the game online at nfhsnetwork.com.

“Now we have to work even harder and fine tune a few things,” says Piccaro.