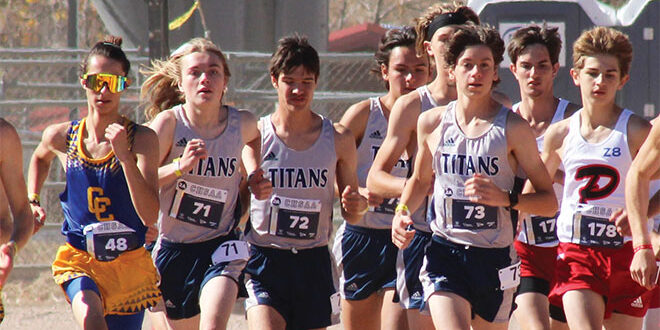 It was a youth movement this season for the Crested Butte Titans cross-country team with so many freshmen and sophomores running their way through the 2022 season. In the end, it was a combination of youth and seniority that led the team at the 2A state championships on Saturday, October 29. Senior Ruby Pendy wrapped up her high school career placing third at the state meet and sophomore Jake Pendy led the boy’s team with a 16th place finish while his teammates all stepped up their game at the big show to finish 15th out of 20 teams.

It was the third trip in a row to the state championships for Ruby and after placing 10th in both of her first two trips, her goal was to step it up in the standings another notch.

“She was ranked third going in, so a third-place finish is what we were eyeing,” adds coach Shari Sullivan-Marshall.

To reach that goal, the coaches and Ruby had two plans in place. First was to keep her opponent from her region, one of the top two runners in the state, in her sights without causing too much damage. Second was to get that third-place finish.

Ruby followed the plan being mindful that the top two were probably out of reach and that their pace could ruin Ruby’s day. As a result, she settled into eighth place by the first mile and when the course took a turn uphill, Ruby stepped up her game.

“We told her that when she makes a move to make it count and as soon as she crested the hill, she made a definitive move,” says Sullivan-Marshall.

“I knew that hill was going to be rough, and I knew people would slow down at the top of it,” says Ruby. “So, I just made that extra push right at the top.”

Ruby shot her way into third place at that moment and then held it the rest of the race to take third place, putting the finishing touches on a great high school career. A career in which she finished every race in the top 10, even against bigger programs, and posted her fastest time on the state course by over 30 seconds.

“I wasn’t sure if I could keep third place but it’s never good to look behind me,” says Ruby. “I just made a conscious effort not to slow down and keep that pace in the last mile. There is one short, steep uphill near the finish and at that point I was definitely struggling.”

“She ran a perfectly executed race,” says Sullivan-Marshall. “It was such a great race and a great way to end her career. Words can’t really describe how we were all feeling when she finished.”

For the boys, it was different but no less exciting. For starters, only two runners, Giles Billick and Jake, had been to the state championships before. The other four, Cody Pleak, Flint Hoyt, Colby Smith and Max Sullivan, are all freshmen so it was quite the big step for them in their first year of racing high school.

“We told them it’s a 5k race, just like all of the other 5k races they’ve run before,” says Sullivan-Marshall. “It was really all about just keeping them calm and reminding them about the power of the pack and to work with each other.”

The goal for Jake was set as he readied for his second state championships experience. Last year as a freshman he finished 38th. This year, expectations were much higher after such a solid regular season of running.

“We knew top 20 was a good goal for him,” says Sullivan-Marshall.

Jake hit that spot by the first mile and then, as the race proceeded, he bounced around a bit before pushing through to finish in 16th place, a minute faster than his time on the same course last year and the second fastest sophomore in 2A.

“We talked about always looking forward, keeping contact and never giving up and he ran awesome,” says Sullivan-Marshall.

Pleak was the next Titan to cross the line with Billick after him, Hoyt only three spots back from Billick and Smith and Sullivan finishing within four spots of each other.

“Colby just got faster and faster the past two weeks and Giles was three and a half minutes faster than last year at states,” says Sullivan-Marshall.

The boys team came into states ranked 17th but finished 15th and were the second team from their region after finishing regionals in third place just one week prior.

“They were aggressive and engaged and those team results shows that they peaked at the right time,” says Sullivan-Marshall. “To do better than they did at regionals and to have a good experience at states was important because they’ll be returning next year.”

Meanwhile, while the girl’s team will lose Ruby to graduation, Sullivan-Marshall sees a bright future for them as well with a trip to the state championships as a team next year well within reach.

“We have some really young talent and now have much more experience,” says Sullivan-Marshall. “It will be fun to see what happens with the girls team and who rises to the occasion.”

As for Ruby, she now has plans for a robust spring track season and then moving onto a collegiate running career.

“I was a little sad about running my last cross-country high school race, but it was a great way to end the season,” says Ruby. “I’m excited to move on and race in college.”