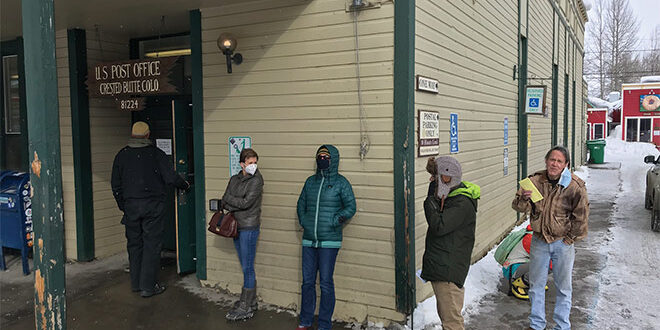 Do we need to have an election?

The Crested Butte and Mt. Crested Butte town councils have sent letters to the United States Postal Service (USPS) asking that residents not have to pay for the local post office boxes.

“It was with great interest that we learned recently that Buena Vista residents will begin receiving free post office boxes beginning January 1, 2023,” the Crested Butte letter states. “The Crested Butte town council strongly requests that the USPS implement this action for our community as well.”

The letter makes clear that despite the urban legend constantly cited by USPS officials that at some nebulous point in history the residents of Crested Butte voted to never receive home mail delivery, that has never been the case as far as anyone can determine. The letter says there is no record of any such decision that has resulted in citizens willingly wanting to accept such limited service. “The town has no record of such an election and USPS has produced no such record,” the letter asserts. “Is it necessary for our community to hold a formal vote to affirm that we do not accept this diminished level of service?”

It goes on to explain the current situation where residents of the area must wait in lengthy lines for parcels that should have been left on their doorstep by UPS or FedEx, “but they must pay additionally for that inconvenience.”

Mayor Ian Billick asked town attorney Karl Hanlon for a written memo detailing what responsibilities the USPS has for communities.

“There are standards, but the US Postal Service has a tremendous amount of discretion on what and how they provide service,” Hanlon told the council at the October 17 meeting. “It is very nuanced.”

“There has been a lot of confusion so it would be good to have that all written down for everyone,” said Billick.

Hanlon said he would prepare such a report for the town.

“While we appreciate that the USPS has initiated the process of finding a new, more efficient facility for Crested Butte, immediate action is needed to provide some relief in this community,” the letter concludes. “We request you take immediate steps to provide free post office boxes to residents of our community as has been done in Buena Vista.”

In his letter to DeJoy and Kubayanda, Bennet requested action to address the concerns he’s heard from Coloradans, including reports of residents going days or even weeks without mail delivery.

“Americans rely on USPS to receive bills and vital federal benefits like Social Security,” Bennet continued. “It is therefore essential that USPS maintains its delivery standards and honors its commitment to serve every community.”

In the letter, Bennet also urged DeJoy and Kubayanda to reduce barriers to receiving mail for communities without home delivery and highlighted his work to secure free P.O. Boxes for residents of Buena Vista, Colorado beginning next year.

“Many rural and small communities in Colorado do not receive home delivery,” his letter makes clear. “Instead, residents must commute to the Post Office and wait in often lengthy lines to pick up daily mail and packages. In many of these communities, post office boxes (P.O. boxes) are only available to purchase, even for full-time residents… As you continue to plan for the agency and the savings from the Postal Service Reform Act, I appreciate your continued partnership with my office to resolve these issues.”

USPS spokesperson James Boxrud said the agency is aware of the Crested Butte problems and is trying to address them. When asked if the national guard could be utilized, he said, “We are acutely aware of the ongoing staffing needs at the Crested Butte Post Office. We are continuing to recruit and hire for several open positions. We are flexing every available resource, including borrowing employees from surrounding areas. All mail is current.”