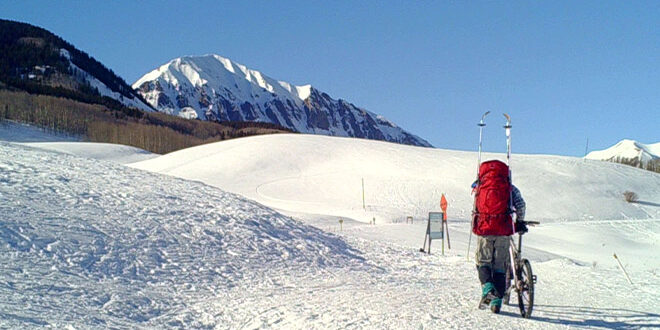 Winter trailheads were less busy last year than 2020 and 2019

Poop is still an issue out there

While some camera issues over the course of last winter decreased the amount of data collected, there was enough information gathered to again determine that the Kebler Pass trailhead was the most visited winter trailhead in the North Valley. With 27,280 recreational visits counted at the eight trailhead monitoring sites in the 2021-22 winter season, Kebler accounted for 9,241 or about a third of the activity. Snodgrass was second and tallied more than 5,000 users while Brush Creek Road was the quietest with a mere 762 visits recorded.

“Outdoor recreation peaked with COVID and this area saw a similar trend,” he told the council. “The numbers recorded last season decreased dramatically but a few places, like Kebler and Cement Creek continue to see busy use.”

He said Kebler activity is centered on mechanized use like snowmobiles while with Cement Creek there has been a rise in non-motorized users like cross country skiers. His report indicated there was a noted decrease in total numbers of recreation use observed from the previous season. “Every trailhead that was monitored dropped in terms of number of overall observed users compared to the record high 20/21 counts,” he said. But even with the decreased counts, Stach said last season was still the third busiest season in terms of overall average.

Stach said he had battery issues that impacted the overall data count. He also dealt with rising snowbanks blocking the cameras during last season’s 99-inch storm. “Last season (2020-21), I was able to collect around 96% of possible data without failure, while this year that percentage fell to around 82%,” he reported. “I think we would have obviously seen higher totals and averages with more accurate data collection, but I’m not entirely sure we would have matched the record high results from last year.” The previous winter’s count of trailhead users came in at more than 44,000 people.

He noted that winter came late last year so recording users didn’t start until around December 10, “simply because there wasn’t any snow on the trails.” He said mid-winter weather plays a major role in backcountry use as well. When there is high avalanche danger, fewer people head out into the backcountry and there were several days of such situations last winter.

“Data collection wasn’t as good this past season with  a couple of large snows blocking cameras, some camera issues and a shorter, warmer ‘spring skiing season’ compared to 2020/21,” he emphasized. “Also, the COVID-19 pandemic and the increased interest in outdoor recreation most certainly played a part in the 44,051 users recorded in 2020/21 (the highest number of users we’ve seen in the five-season duration of the WDCI).”

The data is divided among four types of users: non-motorized like cross country skiers, backcountry skiers and snowshoers; motorized users on snowmobiles; hybrid users who utilize more than one category and for example might be using a snowmobile carrying skis or pulling skiers; and mechanized users on things like fat bikes.

On an average day, Snodgrass and Kebler trailheads tallied the most use with between 50 and 90 users per day respectively. The Brush Creek trailhead and Brush Creek Road average less than 15 people per day while the remaining four trailheads averaged between 20 and 35 users a day. Gothic saw about 500 fewer people using the trailhead this year compared to the season before.

The overwhelming majority of users at Kebler were snowmobilers which accounted for 85% or 7,855 of the recorded users. Fat bikers gravitated to Snodgrass where 375 such riders were counted. Slate River tallied a higher percentage of hybrid use than any of the other trailheads.

Stach said a community survey was distributed to some of the trailhead users and he reported that most indicated the biggest problem was “congestion” at the trailheads. “General congestion and parking issues were the biggest issues along with pet waste,” he said.

The Winter Data Collection Initiative is a collaborative effort between WCU’s Master of Environmental Management program, the Center for Public Lands, Silent Tracks and the town of Crested Butte.