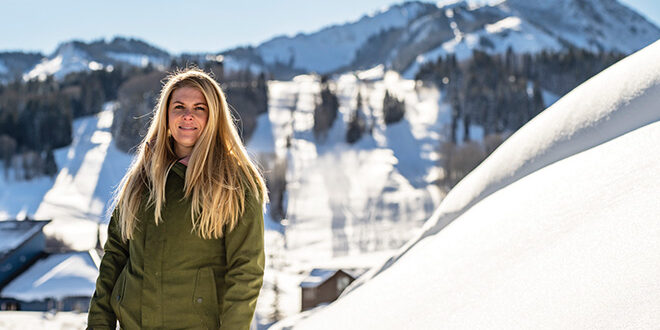 Annie Parr was born in Gunnison and raised in Riverbend by her parents Jim White, better known as “Whitey,” and mom Barbara White. Annie’s mom worked for Jack Dietrich at CB South Metro, a position that Annie now holds today. She had the typical Crested Butte childhood of freedom where she, her older brother Royal White, and their friends would ride their townies up the Slate, grab old innertubes to float the river, build forts in the willows and hang out on Elk Avenue.

“We were free range,” she smiles. “The coolest part of growing up here was everything we were exposed to. My first school was in the current town offices,” she says of the small classes in that stone building. Annie recalls that the worst part of going to school in Crested Butte back then was, “They trucked our lunches up from Gunnison, so they were always rubbery and terrible. But we had a great coach for PE. You got to run around and play dodgeball.” She also remembers the notorious snow pile the kids played on during recess. “They would push this huge pile of snow into a heap and we’d play a very rough style of king of the mountain.” One of the beloved teachers, Cathy Sporcich, had a paddle with your name on it, Annie laughs, “On your birthday, she’d pretend to paddle you. It was very innocent, and more to embarrass you.”

Annie went to the Crested Butte Academy in ninth grade and graduated in 2003. Her brother was already there and Annie explains, “I liked snowboarding so I decided to go there. I got a scholarship and then I had to raise the rest of the tuition money myself by working for my dad at Karolina’s Kitchen. My graduating class had 14 kids.” Annie feels that the Academy was a cool school that expanded one’s thinking as much as the sports aspect it was known for. “When we weren’t snowboarding, we still got out of school early to do things. You had to go kayaking or climbing or mountain biking so I learned how to do all those things. Those experiences gave me the love of the outdoors and what I love about being here.”

When she was 19, Annie ran Mountain Grown Productions, a sound engineering and production company that mixed sound for shows and music. “When you’re young, you go see a lot of live music and I did this company when I couldn’t even drink,” Annie tells. Her company worked the Eldo quite a bit and she credits sound engineer Matty Brown for teaching her. “We started out more of a production company, bringing in bands to places like the Rafters, the Eldo, Idle Spur and Kochevar’s. It evolved into the sound company because the equipment and the sound person are the most expensive and hardest to source, so we slowly bought equipment and learned how to do it, hands on.”

Annie had her favorites, “I loved doing Mama’s Cookin’ and any collaborations with Cecil P-nut Daniels. The Eldo was probably my favorite because of the crew that worked there. I also worked a bunch on the mountain and was a DJ during the ISASA ski and snowboard comps. And I did a lot of weddings too.” She decided to move on from her company in 2009.

While working her production company, Annie was employed at the Powerhouse (where Bonez is now located) and when it sold, she moved to the Wooden Nickel. ”You do everything, migrating through all the different positions as waitress, bartending and hostess.” And in the Crested Butte way of life of multitasking with several jobs, Annie was also attending Western State College (now Western Colorado University) for accounting. “I ended up going for three years but left because the production company took off. I was a go-getter so I didn’t have time for college kid stuff,” she says. “But I did have time to snowboard a lot,” she grins. In the summers, she was mountain biking, hiking, dirt biking and kayaking.

When Priscila Palhava of Studio West needed help in her retail shop showroom in 2009, Annie took the opportunity to work there and gain new experience. She eventually transitioned from managing the store to doing design as well. “Priscila taught me a lot, I’m very thankful for her. It was my first time not waiting tables and not having two jobs,” and Annie says she was also able to take her young son Colton with her to work, “Because I’m very good at multitasking.”

Annie knew Jacob Parr forever, she says, because he worked for her dad at Karolina’s, although they really didn’t connect until he was working at The Air Up There, everyone’s favorite skateboard shop. “I was young and in high school so we were just friends. I didn’t pay much attention to him until much later. We got together when I was about 26 years old.”

They had their first child, Colton, in 2012 and Maddox came along in 2019. However, Annie became a mom to Jacob’s two boys from a previous marriage. “Levi and Judd made me a mom first.” This past August, Levi passed away from injuries sustained in an accident while riding his motorized bike. “Levi was a huge part of our life and he was the first to make me a mom, and Judd too, of course. We’re all getting through it,” she says of the trauma that hit their family and the community as well.

After five years at Studio West, Annie went to work for Oohs and Ahs, that had stores in both Gunnison and CB. “It was better pay with paid time off and health benefits,” she says, but the stores wound up closing a couple of years later and in 2014 she took a position at Thurston Kitchen and Bath, where she still does freelance design work through them while working for CB South Metro.

“When I was 18, traveling was the first thing I wanted to do, just to get out but I always did like being here and my parents were here. It’s such a cool place to grow up in, and our kids get out of school early on Wednesdays so they hit the mountain. Because it’s a small town, Colton can catch the bus with his buddies and go snowboarding and then come home on the RTA. I want my kids to have the same freedom and opportunities to play in the wilderness that I had. For me, it is the outdoor resources and the community that I love here, and I couldn’t imagine being anywhere else. There’s a lot of support here. I don’t think that happens in other places.”