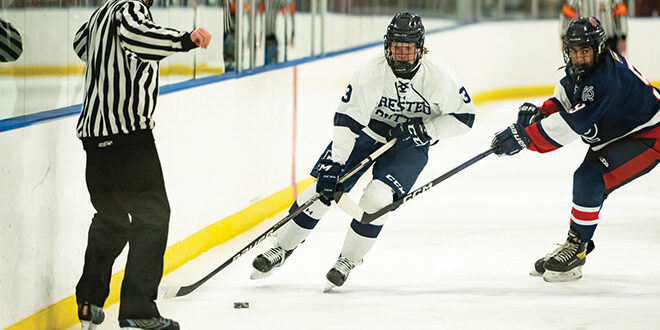 It was a wild week of hockey for the Crested Butte Titans boys hockey team prior to the holiday break as they outgunned Kent Denver for a 7-4 win, battled to a 0-0 tie against Cheyenne Mountain, one of the top programs in the state, and then closed it out with a 5-2 win over Palmer High School on Monday, December 19.

The Titans were noticeably a bit overwhelmed by Palmer in the first half of the opening period. Online scores and stats comparing the two teams had pre-game prognosticators expecting a relatively easy game for Crested Butte after their two previous battles with Kent Denver and Cheyenne Mountain. But what transpired proved a much different reality as Palmer set the pace from the opening faceoff while the Titans appeared sluggish.

The effort of Jack Perkins in net helped stave off the initial Palmer surge while the rest of the Titans team woke up and they closed out the first period tied 0-0.

“We underestimated them,” says coach Billy Watson. “And we were coming off of two unbelievably draining games, so we came out sluggish.”

Crested Butte looked to turn the game in their favor as they opened the second period on a powerplay but expectations were abruptly dashed as Palmer scored a short-handed goal 15 seconds into the second period. A subsequent Palmer penalty had Crested Butte in a five vs. three powerplay and Dominick Cerio broke the seal on the Palmer net 30 seconds later off an assist from Grady Buckhanan to tie the game up.

The Titans’ third line of Rhodes Moffat, Jake White and Mason Whiteman, with Connor Zummach and Tanner Maltby getting shifts as well, then looked to inspire the entire team with their effort during a shift midway through the period and Crested Butte had Palmer pinned for a series of shifts. The press eventually back-fired though as Palmer broke loose catching the Titans out of position and scored to retake the lead.

That second goal, and the continued effort of the third line, may have finally snapped the Titans out of their funk as they rattled off two goals in 30 seconds when Sam Dukeman stuffed the puck in during a melee in front of Palmer’s net and Cerio struck again off an assist from White to put the Titans on top 3-2.

“Our third line was incredible,” says Watson. “Those kids took it to another level.”

Watson then turned to his third line to open the third period and, once again, the third line came through to set up defenseman Marshall Spann for a goal 19 seconds into the period for a 4-2 Titans’ lead.

Palmer’s goalie matched the effort of Perkins to come up with several saves throughout the third period and the two teams traded off rushes and puck possession to keep the Titans working to protect their two-goal lead.

Both Crested Butte and Palmer suffered penalties down the stretch and the two teams finished the game in a four v. four situation. Palmer pulled their goalie to get a man advantage on offense, but the two teams headed back down the ice to Palmer’s defensive zone for a faceoff in the waning moments of the game. Cael Medina won the subsequent draw and Buckhanan retrieved a loose puck to fire his shot past the Palmer netminder to seal the 5-2 Titans’ win. Perkins finished the game stopping 28 of 30 shots.

“We were getting the puck in deep and chasing it and doing a lot of things right in the third period,” says Watson. “The work of that third line was a big reason why we got the win.”

The Titans enter the break with a record of 5-0-1 and Watson looks to use the time away from games for some rest and recovery for his players as well as a chance to continue fine-tuning.

“I think this break will be good for us,” says Watson. “A chance to get a refresh and to keep working on what we know we need to work on.”

And, while the holidays are a time to refresh and refocus, it is also the time for the annual Alumni hockey game on Thursday, December 29 at 7 p.m. at Big Mine Ice Arena.