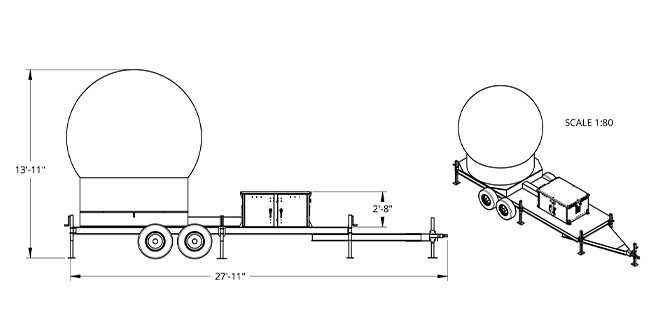 A long-awaited Doppler radar installation in Gunnison County scheduled for this fall has been delayed until spring at the earliest. But the hope is that some new technology and upgrades will make it worth the wait for both the Gunnison Valley and for the non-profit organization footing the bill. The radar, complements of Western States Water Partnership (WSWP), is expected to improve local weather forecasting, data collection and cloud seeding operations. Technology upgrades may also improve wind speed data and early wildland fire detection once it is installed on Big Mesa south of Blue Mesa Reservoir in early 2023.

Gunnison County was meant to be a proving ground for WSWP, as the organization would be installing its first radar here to showcase its potential for other locations and a larger scale operation across the West. Installation seemed imminent in November, and was only a few days away from being hauled up to Big Mesa on a trailer when a series of complications and opportunities led WSWP to make the difficult decision to hold off for another few months.

WSWP purchased the $1.1 million weather radar from manufacturer/partner Advanced Radar Company (ARC) of Boulder, and planned to install and maintain an entire array of a dozen or more radars in other rural/gap areas in nearby regions.

WSWP co-manager Vern Tharp says the issues have included navigating the site location on Bureau of Land Management property, which includes sage grouse habitat constraints on Big Mesa and the review process that comes with it, permitting delays and some less than enthusiastic reception from potential federal funding agencies.

“When WSWP first began its efforts to address the legacy gap filling radar issue over two years ago, we selected Gunnison County as the site for our very first radar for two very important reasons,” explained Tharp in a project update to the Crested Butte News this week.

The first reason was topography, and the second reason was the support of the county and the Upper Gunnison River Water Conservancy District. “The Gunnison River flows into the strategically important Colorado River,” said Tharp, and the organization was encouraged by “the deep support offered by Gunnison County, led by Scott Morrill (Gunnison County emergency services director) and Sonja Chavez (general manager of the UGRWCD) and the UGRWCD.”

WSWP was looking to provide important streamflow forecasting data for the local drainage area, learning from the process and also demonstrating the potential value of such gap-filling weather radars to other areas throughout the Western U.S.

Tharp says over the past couple years there has been a steep learning curve on “how to and how not to execute this larger plan.”

Lessons learned include allowing more time for permanent radar locations to get permitted, and understanding the large portions of federal lands that lie within the western states in their crosshairs where radars would likely be placed.

“It took nearly two years to finally secure our approved permit from BLM for a permanent site on Big Mesa overlooking and to the south of Gunnison. This really inhibits the predictability of consistently securing these sites and nearly destroys our ability to effectively form strategic partnerships. This uncertainty also severely inhibits our ability to secure the capital needed to fund the nearly $1.5 million needed to purchase and install each gap filling weather radar,” said Tharp.

Another lesson learned, says Tharp, is that a trailer-mounted radar might be easier to deploy and adjust.

“We are working with BLM to adjust our deployment strategy to include utilizing a ‘trailer-mounted’ radar for the first year or so versus going directly to a permanent structure for our radars,” said Tharp. He described that it might be easier and faster to secure permission for temporary deployments than permanent structures, making deployment more efficient while also allowing WSWP to confirm that a specific location is ideal for its data gathering partners before investing in a permanent structure.

Meanwhile, system upgrades have become available for the radar with new technology that can expand its reach and potentially help detect wildland fires earlier.

“Although the original and primary purpose of our planned array of gap filling weather radars was measuring and calculating snowpacks within the view of the radar as it accumulates and then using this knowledge coupled with a dozen other weather data points to more accurately forecast streamflows throughout the following spring and summer, the data from our gap filling radars may have near half a dozen other very important applications,” said Tharp.

“These other applications include a number of severe hyper localized weather events such as flash floods and severe snowstorms. The really exciting application for our data is the potential for early detection of wildland fires, very soon after they ignite.”

Tharp reviewed how early detection and early intervention has become the primary focus of many wildland fire fighting professionals, and this is generally being addressed using drones and other terrestrial and space borne systems.

“There are strong indications that, with our planned system upgrade, our Gunnison gap filling radar may be that perfect, accurate and affordable tool for this challenge,” said Tharp. With the upgrade, the gap radars may be able to survey nearly 4,000 square miles nearly every 12 seconds, 24 hours per day, seven days a week.

“A drone just can’t cover that much ground with these same capabilities and fire cameras are highly localized and can’t cover as much area. Further, drones or space borne infrared systems can be impeded by cloud cover whereas our radars will not be so impeded,” said Tharp.

“Ours will likely be able to discern a flock of birds from and a cloud of insects from smoke from a wildland fire as well as a heavy snowstorm from a hard rain. This is another reason we have held off from our planned deployment. This is a difficult decision requiring balancing out the strong desire to ‘finally get this radar in the field’ to focus primarily on streamflow forecasting with the pragmatic reality of waiting for this upgrade and potential success with both streamflow forecasting next spring but potential fire applications this spring, summer and fall,” he concluded.

Tharp says he is confident the now-mobile radar can be installed in the spring, and that gap radars are reaching more national attention as well. He said the next step is to secure better funding.

“We started this a few years ago…to demonstrate to ourselves and others what these gap radars could do. The fact that there’s this gap in radars across the country, you would think that getting this massive data, every 12 seconds from 4,000 square miles would be an easy sell to federal partners. Well, it’s not.” Tharp said he is frustrated with some seeming apathy for the west’s issues around drought and flash flooding. “The west has special unique needs. And you need a comprehensive approach. And we don’t have that right now.”

But he said he believes the Gunnison County radar will contribute and offer the analytical capability to make actionable policy decisions.

WSWP will finish the radar upgrades this winter and plans to deploy it in the spring.