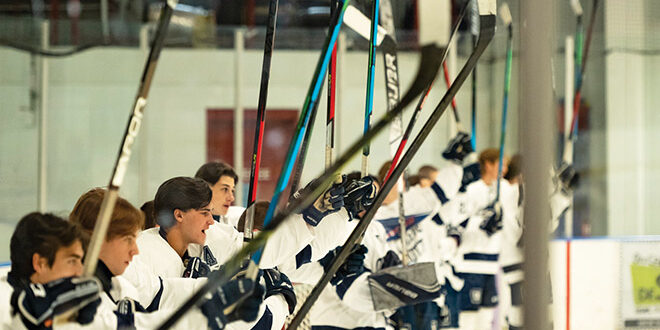 “Ultimately, we just wore them down”

The Crested Butte Titans hockey team opened the season with a bang outscoring their opponents 13-3 to rattle off two wins.

The Titans started things off at home when they hosted Pueblo County on Friday, December 2 and skated to a 7-1 win.

Crested Butte came out in control of the game in the first period holding the puck in Pueblo’s zone for most of the time, but Pueblo’s goalie remained stout in net turning away the Titans’ shots. Despite being outskated by the Titans, Pueblo opened the scoring in the ninth minute when a miscue at the blue line opened up a Pueblo player for a one-on-one and he slid the puck past Titan netminder Tanner Perkins for a 1-0 lead.

Crested Butte got hit with a five-minute penalty shortly thereafter but built momentum through the penalty kill and eventually tied it up when Blue Gardner scored a short-handed goal off an assist from Sam Dukeman. Forty seconds later, Gardner struck again when he tipped a shot by Brendan Hartigan past the Pueblo goalie as the Titans closed the first period up 2-1.

“Overall, I thought we did a nice job of moving the puck but still had some tweaks needed here and there,” says coach Billy Watson. “Huge to have Blue pop two at the end of the period, I think that gave us a little burst of energy heading into the second period.”

That burst coupled with the tweaks Watson spoke of, helped pace the Titans to three goals in the second period starting off with a powerplay goal by Cael Medina scoring off an assist from Grady Buckhanan. A little over a minute later the Titans scored another powerplay goal as Marshall Spann slipped the puck through traffic across to Grady Dietrich and Dietrich stuffed it past the Pueblo goalie for a 4-1 lead five minute into the second period. Dukeman then closed out the second period picking off a pass by the Pueblo County goalie to skate straight to net and score capping the Titans three-goal outburst.

“Our goal pressure was much better, and they ran our plays perfectly on the powerplays,” says Watson.

Crested Butte tacked on two more goals in the third period as Dukeman skated past to Pueblo players to score and then a pass sequence from Gardner and Dukeman set up Rocky Marchitelli for a goal and finishing off Pueblo County 7-1.

“It was awesome to see the kids find the back of the net on that goaltender,” says Watson.

The Titans then hit the road on Saturday, December 3 to face Liberty High School, a team the Titans haven’t played in three years.

“We haven’t seen too much of them recently, but we knew they’re a good team, so we were really excited for the challenge,” says Watson.

The Titans opened the scoring midway through the first period as Buckhanan and Dietrich each found the back of the net in the span of 30 seconds, but Liberty climbed back into the game over the course of the first period and tied the game up 2-2 three minutes into the second period.

“We were doing okay defensively but we needed to tighten it up on our breakouts,” says Watson.

A Liberty penalty soon after their second goal set the Titans up for a powerplay and their special teams came through again as Hartigan scored to put Crested Butte back on top 3-2.

While Liberty relied heavily on their first line of talent, Watson kept shuffling through all three of his lines and that made the difference as Liberty wore down over the second and third period. Hartigan and Dukeman scored in the final minute of the second period and then Gardner scored eight minutes into the third to seal the 6-2 Titans win.

“Our third line did great against their first line and did exactly what they needed to do,” says Watson. “Ultimately, we just wore them down.”

Watson is content with the opening two wins and likes what he sees out of his team so far this year but it’s still very early in the season and Watson remains committed to his goal of getting the team better day-by-day.

“We have a whole different team this season with a lot of speed,” says Watson. “I was impressed with our speed and our legs, we’re a step ahead at this point in the season compared to past seasons and I’m throwing a lot at them and they’re just absorbing it. We still take it one game at a time though to reach our ultimate goal.”