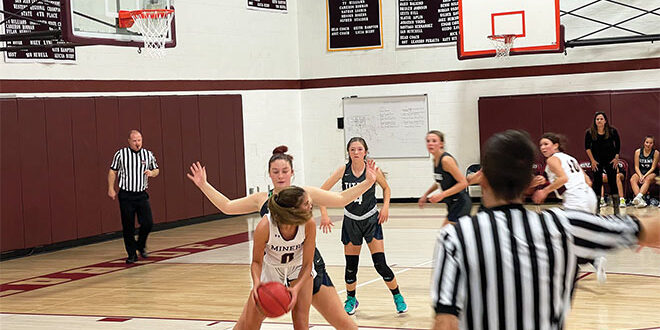 “It feels good where we are”

Energy and attitude have been extraordinary on the Crested Butte Titans girls’ basketball team throughout the preseason and they got their first test of the season on Friday, December 2 passing with flying colors as they cruised to a 58-8 win over the Telluride Miners.

The Titans have 17 players out this season and given what coach Amanda Reynolds has seen throughout the preseason, she’s got eight varsity players and three additional swing players to pull from come game time. Reynolds was able to get everyone in against the Miners as their slow start lasted for just the first quarter before they took off.

“We were ready for the game by the second quarter,” says Reynolds. “We started out slow with a case of the first game nerves, but I wasn’t worried about it, I knew it would work itself out.”

It did just that as the Titans then put 17 points on the board in the second quarter alone to put the game out of reach early.

“They all settled down together at the same time,” says Reynolds.

When the Titans returned to the floor for the third quarter, their excitement ramped up once again as the team racked up four fouls in the first two minutes forcing Reynolds to call a timeout and reel them back in.

“I just had to tell them to play smart defense and they did that coming out of the timeout,” says Reynolds. “I’ve been with these players long enough where they trust me, and I trust them.”

Case in point, the team committed just four more fouls for the rest of the game and players were moved in and out of the game to get them valuable early season varsity experience.

“We had a lot of new varsity players, swing players and some freshmen get into the game and play well,” says Reynolds.

Blakeley Reynolds led the team with 21 points, Monce Alvarado knocked down 11 with Leigh Harpel adding in six points while Mara Pennie shot four for six from the free throw line.

“It’s always exciting to get that first game out of the way because you don’t really know where the team is at until you’re up against some competition,” says Amanda.

The team has the week to continue working on things as they prepare for a tournament in Grand Junction on Friday and Saturday, December 9-10.