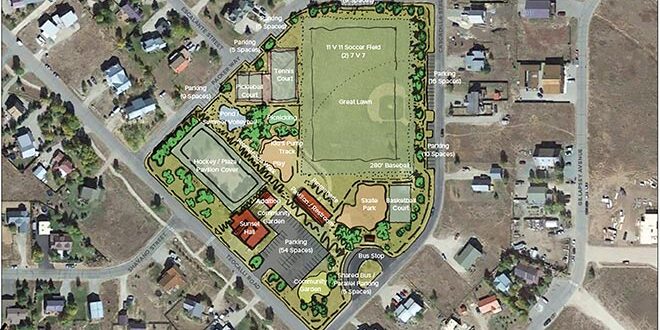 For an area thirsty for more field, ice and general organized recreation space, there is now an official plan to bring meaningful relief in the form of a new and improved Red Mountain Park in Crested Butte South. After a few years of planning, the Crested Butte Property Owners Association (POA) has adopted a Parks Master Plan and will next begin preparing a fundraising effort to make it happen.

That fundraising will take some heft, as the project is expected to cost an estimated $5 to $6 million in total. The POA board reviewed the plan, prepared by landscape architecture firm Mundus Bishop of Denver, during their regular meeting on December 20 before formally adopting it.

The Parks Master Plan includes both Red Mountain Park, an 11-acre parcel which would be reconfigured, and an undeveloped 3-acre parcel on Brackenbury Street that is also POA-owned. The plans for Red Mountain Park would primarily relocate the hockey rink, playground and community garden and include a full regulation length soccer field/great lawn, a new central pavilion with restrooms, an addition to Sunset Hall with an expanded parking lot, basketball, tennis and pickleball courts, a skate park, a reoriented skating pond/volleyball court and clusters of additional parking spaces with connecting trails around the perimeter.

“I think we’ve come to a really good place,” said POA board president Andrew Sandstrom of the long-awaited design.

POA board member Mary Haskell said the community involvement and stakeholder meetings made a big impact on the master planning process with Mundus Bishop and other consultants.

“We spent a lot of time looking at what our dream would be, within reason, and finding some wiggle room,” she said.

The hunt for funding

The next step is to determine funding and potential project phases. The POA secured a reimbursement grant late in 2022 of $14,000 from the Gunnsion County Metropolitan Recreation District (MetRec) for some of the planning costs.

“That springboards us forward into the planning feasibility study for the fundraising component,” said POA manager Derek Harwell. The POA is also getting input from another consultant about how to strategize for attaining funding sources.

“I would say that it’s ambitious,” cautioned Sandstrom. “It’s a very comprehensive plan. And it’s a bit of a reach. I think we’re shooting for what we’re hoping for.” He said board member Sue Schappert, who could not attend the meeting, had shared concerns about what the plan could cost members who potentially would not be using all the amenities, particularly the high-ticket item of a new hockey rink.

“One of the tasks for the parks subcommittee is going to be, how do we find the funding for this without necessarily having to assess or raise dues in a huge way on members?” said Sandstrom. “Our goal would be to find as much outside funding as we can, as well as defining some of the revenue streams that could be created around these amenities.” He listed the pavilion, soccer field and hockey rink as potential revenue streams.

Sandstrom said that while trailheads, bathrooms and other recreation infrastructure can now be pulled from some LMD funds, he thought those funds would be limited and spread thin with the county.

“I think there are a lot of opportunities there. But I don’t think the lodging tax is an opportunity right now,” he summarized.

“The good and the bad is that all of our amenities are in such need of repair that at this point…we didn’t feel like we were throwing good money away,” said Haskell.  She noted that the transport station, the hockey rink and the fields already need to be redone, and it won’t matter much where they start.

Harwell added that the new basketball court, skate park and community garden relocation could be done at the southeast corner in a relatively low-cost first phase.

West Elk Hockey Association (WEHA) director Cody Aidala and WEHA board president Jeff Moffett attended the meeting to offer their perspective on the master plan. Moffett said while more ice facilities are needed, there is also the reality of funding issues. He said the city of Gunnison is looking at a major budget shortfall for its own ice facilities when the associated sales tax sunsets in 2032. “They have time to come up with a plan, but they haven’t done anything yet,” he said.

“We’ve strongly encouraged MetRec to go to the voters county-wide to help the city with the funding gap that’s looming. That wasn’t the decision, as you know,” said Moffett.

He advised that the POA be prepared to add the new rink in phases, starting with a slab and a roof. “You’ve got to be realistic about revenues and costs,” he said, “as much as I would like to see refrigeration.” The board discussed at least laying the pipes when pouring a slab.

Aidala also noted the year-round versatility of a covered rink for soccer, pickleball and lacrosse uses, particularly during inclement spring and summer weather, which he said would help people understand and appreciate the cost of the infrastructure as more than just an ice rink.

Moffett commented on the importance of keeping the popular skating pond adjacent to the current hockey rink.

“We’re under a lot of pressure from our members to keep costs down, to get hockey back to where it was, make it something where kids just go for fun, learn to skate, pick up sticks and where it’s not an organized expense of a Crested Butte sport…and I know, as a father of a hockey player, there is something almost magical about the pond,” he said.

Harwell assured him that the new plan maintains the pond, albeit reoriented slightly.

Harwell also reviewed the details of the park on Brackenberry, which includes a small picnic shelter, native grass lawn, pump track and nature play area. He said he is hoping to secure an easement for an access trail from Cascadilla as well.

The board adopted the plan unanimously. “It doesn’t mean it will all necessarily happen,” noted Sandstrom. “But we can adopt it.”

The parks subcommittee will be meeting monthly to tackle operating costs, go after funding and fine tune the details and potential phases of the project.