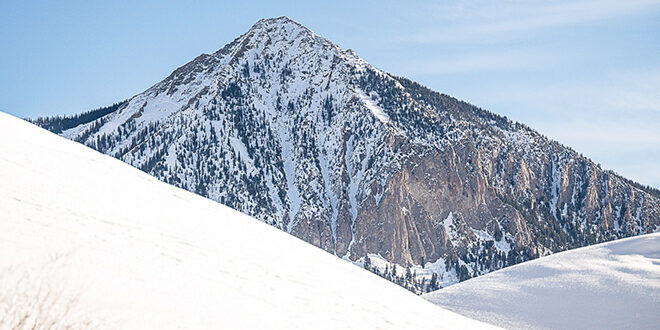 Keep it coming and help fill those reservoirs

It is too early to draw definitive conclusions in terms of the Gunnison Basin’s water situation even given the consistent snowstorms we have experienced recently. But it is currently in a good spot. While the Gunnison Basin is recording snowpack that is significantly above average and is about even with where were last year at this time even after a 99-inch snowstorm barreled through the area in late 2021 and early 2022, it takes more than good December and January snow to ultimately fill the reservoirs.

“It’s too soon to say what our water year might look like,” cautioned Upper Gunnison River Water Conservation District (UGRWCD) general manager Sonja Chavez. “As we saw last year, we had a great snowpack through January and then it stopped snowing. We didn’t see any significant storm events the rest of the winter season. Then, wind and dust on the snowpack was a problem, and our snowpack disappeared before our eyes.”

According to UGRWCD water resource specialist Beverly Richards, last week the area in general was recording 140% above average snowpack and that has dropped a bit this week to 133%. The water content is at 129% of average, which is a good sign.

“That sounds good but last year was similar and we saw a quick turnaround,” Richards described. “Unfortunately in 2022, as precipitation levels began to drop in February and March, and with a severe dust on snow event at that time, snowpack numbers dropped pretty quickly, and snow melt began early.”

Richards said the area SNOTEL (snow telemetry) sites are recording the most snow in their current data in the northern area of Gunnison County. She said the highest snowpack numbers are coming from the Butte (149%), Park Cone (158%) and Schofield (146%) SNOTEL sites. The SNOTEL site near the Lake Fork is currently at 87% of average, so snowpack is less in that area.

It is always a good idea to check in with longtime Gothic winter weather watcher billy barr who has been tracking snow for decades, and he said that this winter is acting more like a normal season than last season.

“This winter is doing quite well especially after a very weak start,” he reported. “The snowpack is well above average, though the past week’s snow was much lighter in water than everything earlier. That means it is still settling and catching down to the average. But this is a good winter, if not anything overly special. Last year’s end of December storm was big, but that was pretty much the winter while this year has been steady, which is more like it tended to be in the past.”

barr’s data indicates that Gothic is above average in water by a good bit even if just a slight bit below in snowfall total. “As of Saturday night, this winter was sitting at just 4% below average for snowfall but the water content of the fallen snow was 19% above average (which is actually more significant, if less glamorous),” he stated via email this week. “This has to do with the trend of the past half decade of much denser snowfall. The average snowfall density of the past 49 years is 6.69% but in the past five years it has been 8.36% — and no winter ever got as dense as 8% until five years ago (though it was creeping towards it). The past five winters did end above 8% and this year is heading towards it as well.”

Moving away from La Niña?

That dense snow with higher water content is helping the long-term drought situation but it will take a lot more to get over the hump. Richards said as of January 17, 74% of Gunnison County is currently experiencing no drought conditions and this has been the case for the entire month of January. She said the U.S. Drought Monitor is now expecting a shift from the current La Nina pattern to an ENSO-neutral (El Nino-Southern Oscellation) pattern for February to April. If that comes to fruition, more precipitation could be expected for Gunnison County.

“If precipitation events continue, this could be very good for the basin this summer,” Richards acknowledged. “However, last year we had a healthy snowpack in January but the lack of precipitation for the following few months along with the major wind event and the resulting dust on snow reduced that snowpack pretty quickly.”

The Bureau of Reclamation is currently forecasting a total of 759,900 acre-feet of runoff into Blue Mesa. Blue Mesa Reservoir is currently at 35% of full and with that amount of runoff, they are forecasting the end of year (2023) content to be 52% of full. Richards said this would definitely help as would a couple more years of healthy snowpack.

And of course, the water leaders in the region have been doing what they can to assist any precipitation falling in the area through cloud seeding. Richards said the local cloudseeding program has been going on for 20 years and started this season in early November. “So far this year, we have used 589 generator hours, and that includes the remote generator at Lake Irwin. We have also installed a second remote generator on Black Mesa with a target that reaches to Blue Mesa and into the Lake Fork area,” she explained. “Last year the benefits of the program were a 7-12% increase to water content as a result of the cloudseeding, but we do not have that information yet this year. It is hard to tell as there has definitely been an increase in precipitation due to the atmospheric rivers out of the Pacific Ocean, but the snow water equivalent may have gotten a bump from the cloudseeding.”

It’s good but not yet great

The water reality is complicated and it will take a lot of snow and rain to get the basin where it needs to be in order to consistently fill our nearby reservoirs. “Scientists are describing our water situation as long-term aridification and not “drought” which is a temporary situation. Lower reservoirs and lower than average stream flows are the new normal,” concluded Chavez. “It would take several years like 2019 to refill our dry soils before we can see above average streamflow and possibly see a full reservoir at Blue Mesa — which isn’t probable.”

So, keep getting out and doing your snow dances. We are only halfway through the ski season so another round of storms would benefit everyone.