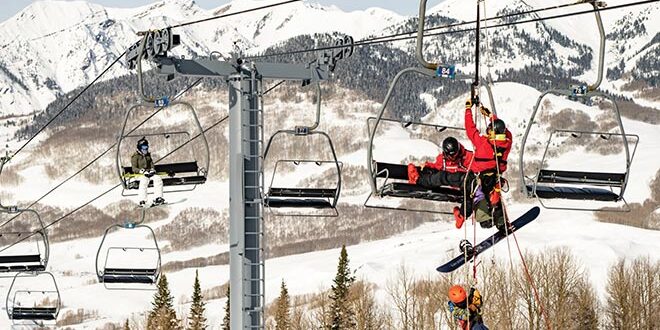 No reason given for stoppage

Over the weekend, the Gold Link lift at Crested Butte Mountain Resort stopped operating and passengers on the chairlift were evacuated by Ski Patrol. There were no reported injuries.

The reason the lift stopped operating was not disclosed.

Eyewitness David McElyea was in the Umbrella Bar vicinity on Sunday and watched some of the evacuation. “We got to the top (of Painter Boy lift) and could see people still on the lift and they had roped off all the runs that go down to Gold Link,” he told the News via email this week. McElyea said he spoke with a woman whose brother had been stuck on the lift about halfway up for approximately 90 minutes before the evacuation began.

“The evac started around 1:35 I would guess,” he recalled. “And it took some time. We left Umbrella Bar around 2:30 and from what we could see from the top they had unloaded four or five chairs. One of the guest services people told me they had three teams doing the evacuation… Ski Patrol was doing a great, amazing job from what I could see,” he said. “In almost 40 years of skiing I’ve never seen a lift evacuation.”

According to Block, Gold Link has been inspected and resumed normal operations at approximately 3 p.m. on Tuesday, January 24.

“Crested Butte Mountain Resort extends its apologies to the guests who were inconvenienced by this event,” said Block. “The resort places the highest value on the safety of its guests.”