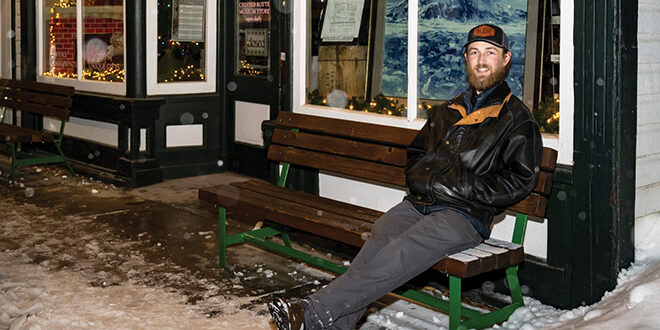 Born in Y2K to parents Krista and PJ Hildebrandt, Robbie Hildebrandt was raised with the rest of the CB millennial kids. If you’ve been on the mountain anytime in the past 35 years, you’ve most likely run into his parents since that’s how long PJ has been fitting skis and Krista has been on ski patrol. Robbie tells of the November day before he was born—his mom was going up to do lift evac training, but they wouldn’t let her because she was too pregnant and couldn’t fit into the harness. “She was all emotional about it and then went into labor,” he tells. Adding to the adventure of having a baby in winter at the end of the road, “They were stopped on the way to the hospital by a cattle drive in a blizzard. And that’s about the most Crested Butte birth I’ve heard yet,” he laughs.

Despite that exciting birth, Robbie says he had a pretty relaxed childhood compared to the outside world. “It was awesome. My parents didn’t worry too much about where I was because I was in a one square mile area. It was all an adventure and really helped me experience the world – going out hiking whenever I wanted, exploring the backcountry. It gave me an appreciation and understanding of the nature that surrounds us, giving me more of the eco-friendly view of life, an environmentalist view.”

His graduating class from CBCS in 2019 had around 60 kids and Robbie says that he was a bit more on the outside of the social scene. “I was a little more of an introvert and did things on my own a lot, trying to figure myself out. The other side of growing up in a small town was trying to figure out what I wanted to be.”

He also felt that there weren’t a lot of activities for his friends and him to do together for the most part that didn’t involve the outdoors, and thought it was challenging trying to figure out something extracurricular. Robbie felt that if you weren’t an uber athlete, you didn’t fit the CB mold. “We have a lot to do in nature but there’s not a lot for kids to do if you’re not into sports. I was into sports growing up, but I like to call myself the social athlete. I do like to ski, bike and hike but not at the uber level, I’m just there to kick back and have a good time,” he explains. “I found other things to fill my time with.”

Robbie’s niche was music and he and some friends put together a band called Limeade in their senior year with Robbie on drums and his percussion of choice, the cajon. “We were just a jam band playing music like Pink Floyd and Grateful Dead. We were total hippies, hanging out in my friend’s garage after school. We’d just jam for hours. It was Max Faust, Pierce McLaughin, Hunter Wright and Linda Horn and sometimes her sister Essie too. We threw parties at the garage.”

Robbie attended Western Colorado University (WCU) for a year to study mechanical engineering and was part of the inaugural class of the CU Boulder partnership program but when COVID hit and classes went online, Robbie didn’t feel he could focus. “Online classes weren’t my thing, so I decided that college was not my speed.” At the same time, he observed that essential workers were a necessity and were able to make a living here. He already knew he wanted to stay in the valley and came to the conclusion he needed to learn a trade that he would enjoy and one that would also pay the bills. Starting out with roofing, Robbie then jumped into high end carpentry with Crested Butte Builders.

As most youth feel, Robbie started thinking he needed to experience life outside of the valley, so he moved in with friends in Colorado Springs. It didn’t work out so well and after someone rear-ended and totaled his truck, he thought home looked pretty good. “I felt relieved to be back in a familiar place, but I still didn’t feel like I had what I wanted or needed, so I was still searching. I took a road trip up to Seattle to check out a diving program for underwater welding.”

Seattle was a bit too aggressive for Robbie and he didn’t like its vibe. “The people seemed angry and the city was dark, the weather was dark, everything seemed dark as compared to sunny CB.” During this time, he went to see his maternal grandpa in Minnesota, who passed away four days after Robbie arrived. His grandfather’s passing led Robbie to realize how much home meant to him and that revelation was the impetus for him to return. “I realized how beautiful the place I live in is, even though it’s so small there’s so much opportunity, especially at this point in time.”

He’s now working at Timberline Mechanical, having started out as an apprentice for boiler work and moving into head boiler tech when the position opened up. “I’m taking the natural gas coming into the house and basically making it blow up to make it heat the floors or baseboards,” he grins. “I love what I’m doing. I’m getting the education I was looking for and I’m learning hydronics and thermodynamics.“

Robbie is currently living in CB South with his support pooch, Callie, a white shepherd he adopted from Gunnison Underdog. “She’s been living a happy life here with me. She’s a CB dog. Pretty much the only way I was able to find an affordable place in the valley that would allow a dog was through my parents, who own the Alpengardener property,” he says of his upstairs apartment. “I know that I’m one of the more fortunate kids to grow up in this valley to have parents who were able to plant their roots enough to have a place for me to live. This is invaluable.”

Robbie notes that over the years, he’s watched the valley change for both the better and the worse. “The cost of living is hard. The ability to hold a labor body of workers in the valley seems impossible these days with the cost of living and the affordability and availability of housing.” But he certainly feels this is his home, and loves how Crested Butte and the valley is still so accessible to the outdoors. “I go dirt biking on the back roads. Dad made sure I was a dirt biker growing up and I got my first dirt bike at four years old. Mom said a dirt bike is a great way to learn clutch. Right now, I can walk out my back door to go do anything I want whether it’s biking, hiking or skiing, and nature’s my escape.”

Share
Previous The T-Bars are spinning at CBMR
Next Mt. CB pays $750,000 to secure Homestead settlement