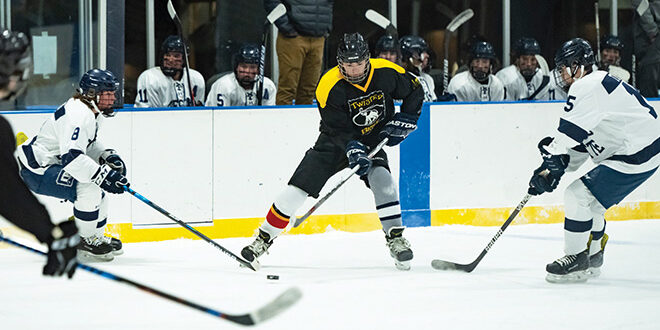 Titans cruise to a win in annual Alumni game

Never in the history of the annual Alumni hockey game has there been a result like the one last Thursday, December 29 as the current Crested Butte Titans high school hockey team skated to a 6-0 shutout over the Alumni team.

The Alumni won 6-5 two years ago, but the high school team avenged the loss last year skating to a 6-4 win with some help from their coaches Billy Watson and Shane McGuinness. And over the past six matchups leading into the game last week, both had won three times.

This year, Watson and McGuinness assumed their roles as coaches allowing their players to do the job themselves, a testament to the team that is currently 5-0-1, sitting at the top of their league standings and who return to action on Friday, January 6 when they host Battle Mountain at 5:30 p.m.

It appeared a somewhat more organized Alumni team was on hand for the match up this year, and by more organized I mean simply not quite as many players and not nearly as many “impaired” players, or so it seemed. Some pre-game subterfuge was afoot as perhaps there was some Alumni locker room hydration taking place.

Nevertheless, the list of alumni included the usual suspects Danny Stoneberg and Ashton Mabry, Graham Barrett, Sully Marshall, Joe Coburn, Chris Myers, Derrick Shomler, Walker and Ethan Carroll, Jack and Luke Collins, Matthew and Teddy Trujillo, Joseph Stock as well as Jack Lambert making his debut as an alumni player and goalies TJ Wonnacott and Shaughn Rourke sharing the job in net. And while numerous other Alumni were on hand to help in the cause, there were some holes as neither the Reamans, Evans nor the Wiggins suited up, the Piccaros were out of town and it looks as if the days of Robbie Holleran, Mo Gillie, John Tharpe and Daniel Hargrove are long gone leaving just three Wolfpack jerseys on the shoulders of the Alumni team.

Slated to start at 7 p.m. with families, friends and a random assortment of looky-loos lining the glass rink side, the Parks and Recreation ice crew, hockey officials and Titan coaches did some last-minute ice repair to ensure a solid surface for the showdown thus delaying the game a bit.

Once they hit the ice for warm up, the Alumni were flying around excited at the opportunity to exact revenge and simply play hockey with their friends in front of a crowd. Meanwhile, the Titans remained focused and perhaps a bit uneasy. Fact is, you never know what the Alumni are going to bring and an unintended injury could derail what has been a pretty good high school season so far.

The Alumni carried their energy through the first period with heavy forechecking looking to shrink the ice and provide more scoring opportunities. The ploy worked initially and Rourke provided the needed saves and Myers and Stoneberg the needed defense to thwart early counters by the Titans.

And while the Alumni’s effort had the Titans somewhat disheveled in their play, the effort was unsustainable as the Titans struck first late in the first period. Some pressure along the boards by Sam Dukeman forced an Alumni misstep and Grady Dietrich seized on the loose play to fire a shot past Rourke for a 1-0 Titans’ lead at the end of the first period.

The second period opened with a goalie showdown as both Rourke and Titans goalie Jack Perkins made numerous big stops. Stock and the rest of his Alumni teammates thought he had tied the game when his shot pinged off the piping in the fourth minute, but the official was right there to make the call leaving the Titans still on top by a lone goal.

The Alumni had several additional chances as Coburn’s efforts mid-ice helped keep the Alumni pushing and both Barrett and Teddy had good looks on net but Perkins did what he has been doing all season—stopping shots—and the Titans managed to hold onto their slim lead heading into the third period.

The third period is when the annual Alumni game always gets a little loose. Tired legs paired with continued consumption by the Alumni can often thwart their chances at making it a game. While the past couple of years, the Alumni did manage to make it exciting until the end, this year was another story as the Titans have proven time and time again this year that they are a third period team, and they did it once more against the Alumni.

Dukeman started it off for the Titans scoring in the fifth minute of the third period to go up 2-0. The Alumni hung on over the course of the next four minutes, but the pace of the fresh Titan legs proved overwhelming as they scored again in the eighth minute. Three minutes later Dietrich’s initial shot was stopped but Marshall Spann followed to score the rebound for a 4-0 Titans’ lead. Thirty-five seconds later Rhodes Moffat scored and then Dietrich picked the far post three minutes later for a 6-0 Titans’ lead.

As the clock wound down, the Alumni threw everything they had at the Titans, literally, as nearly the entire bench emptied onto the ice to try and score at least one goal but, they didn’t.

While the Alumni now return to their “adult” lives, the Titans turn their attention to the season as they host Battle Mountain on Friday, January 6 at 5:30 p.m. in Gunnison.