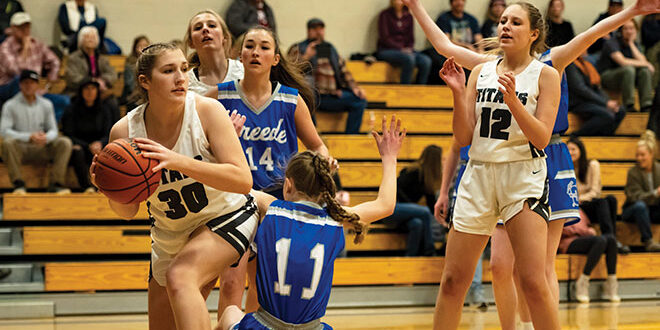 Most points ever scored in team history

Granted, I’ve been covering the Crested Butte Titans girls basketball team since their inception back in… a while ago, and my memory has grown foggy but I’m almost positive no Titans girls team has ever scored 75 points in a single game. That is until Thursday, January 13 when they rolled past the Creede Miners 75-16 in mighty Mt. Olympus.

There was a time not too long ago when they’ve had in or around 75 points scored against them regularly, but now they’re putting up those numbers and it’s more than just scoring 75 points. There’s something more to the Titans than coach Amanda Reynolds has ever seen before.

“They’re really confident in practices and I have seen more consistency now,” says Reynolds. “We’re walking on the court now expecting to win or at least be in the game and I don’t think all of us have been as confident as we are now.”

The Miners traditionally have been a tough opponent for Crested Butte, but they were noticeably short-handed with a small bench and most of their players freshmen. This is a common occurrence among smaller Colorado schools and one that plagued the Titans not too long ago.

“They’re building, we’ve been there too,” says Reynolds.

But even a full bench may not have been able to stop the Titans on this night as they came out of the gates firing inspired by a stifling press that helped pace them to a 24-2 lead by the end of the first quarter with points coming from six different scorers.

“How we start often dictates how we’re going to play the rest of the game,” says Reynolds. “If I think our press can be played, I start with it. It helps us start out more aggressive and scoring points off the press sets us up for success later in games. I can now count on all of them to score.”

Reynolds used the second quarter to shift the team’s focus to other elements of their game with a call for better defense and to run their halfcourt offense. While the Titans’ scoring rate slowed, the variety of scoring continued in the second quarter as Annie Collins, Mara Pennie and Morgan Feltus also dropped in buckets and the Titans were sitting on a 36-8 lead at halftime.

“I’ve told a few individuals that if they don’t play better defense, they may not play and they are answering the call,” says Reynolds. “And we ran through our entire offense several times. Players are starting to get the ball where they’re most confident.”

Reynolds opened the second half with her starting unit again but continued to get more players in the game and in different roles as she continues to build their basketball IQ. That way, when players are needed in certain positions during a game, they’re ready. The adjustments did little to slow the Titans down as they put up 24 points in the third quarter and 15 points in the fourth quarter to take the 75-16 win. Lexi Pickering recorded a double-double with 20 points and 10 rebounds, Blakeley Reynolds tallied eight assists to compliment her usual scoring output, Ellie Duryea had 14 points and seven steals while Molly Miller, Leigh Harpel and Collins all scored six points each.

“We have a pretty in-depth offense and I’m getting players in different positions and getting them more comfortable with the overall flow of the offense,” says Reynolds. “I can go pretty deep in the bench.”

The Titans have one more test before they enter league on Thursday, January 19 against Center.

“That’ll be a tough game, every league game is a tough game,” says Reynolds. “We need to stay healthy and keep working.”