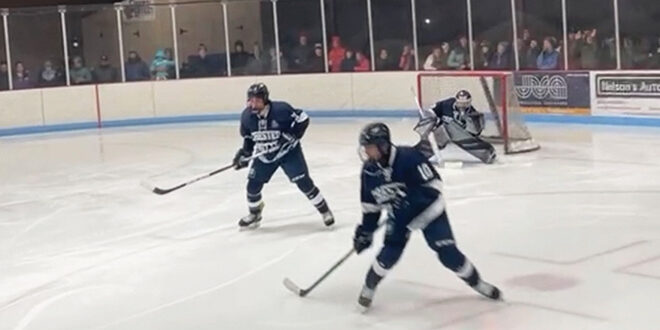 The Crested Butte Titans hockey team hit the road last weekend to face the Glenwood Springs Demons on Friday, January 20 and then headed to the Front Range to play Mullen High School on Saturday, January 21.

The Demons were set to be the biggest test for the Titans thus far this season as they came into the game 9-1-0 scoring 62 goals while giving up 16 through their first 10 games.

“We didn’t really have any expectations going into the game, just go out and play our best,” says coach Billy Watson. “We knew they were kind of a powerhouse with the addition of players from Aspen and we were missing some guys, so we had to make some line adjustments.”

Glenwood Springs set the pace in the first period and opened the scoring midway through the period, but Crested Butte responded two minutes later during a powerplay when Sam Dukeman scored his ninth goal of the year off assists from Grady Dietrich and Brendan Hartigan. The Demons continued to press looking to retake the lead but the work of Jack Perkins in net helped sustain the Titans’ stand, including two penalty kills, and the teams finished the first period tied 1-1.

“The first period was ok, I thought they were kind of working us in our zone,” says Watson. “Jack came up big and Colm (Piccaro) and (Brendan) Hartigan really stepped it up on defense. They were just getting too many looks in our house.”

Watson talked to the team between periods about getting back to basics and to do a better job with not getting spread thin on defense.

“We wanted to keep it tight and contained rather than have them open up the middle on us,” says Watson. “I just told them, simplify the game, do the simple things right and bring some physicality.”

While Glenwood continued to dominate puck possession, the Titans did a better job of protecting the house and withstood additional attacks by the Demons. The relentless pressure soon paid off for the Demons as they scored 12 minutes into the second period, but Crested Butte refused to fold. With under two minutes left in the period and pinned, Dietrich blocked a shot with his hand, corralled the puck and carried it up the wing to fire a shot past the Demon goalie tying the game 2-2.

“That was an absolute snipe,” says Watson. “I thought that helped shift the momentum and would give us a push in the third period.”

Unfortunately, it did not as Glenwood’s pace proved too much and Crested Butte’s typically active third line was unable to get as many reps as they usually do. That eventually took its toll on the Titans as the Demons scored four minutes into the third period to go up 3-2 and then iced the win with an empty net goal in the final minute. Perkins finished the game with 40 saves.

“They got us chasing again in our defensive zone,” says Watson. “For now, we will take some positives from the game and it got the younger players more exposure to the higher paced games.”

Crested Butte then headed to the Front Range the next day to face Mullen. While the records indicated a relatively easy skate for the Titans, it was anything but as Mullen came ready to play.

“I gotta give credit to Mullen, they came out hard,” says Watson.

Watson did look to other players to fill roles for the game as personnel on the Titans continues to be thin. One such player was Cody D’Aquila and Watson felt D’Aquila did just what was needed.

“We put Cody D’Aquila on the second line to give him a shot and he did a great job stepping into that role,” says Watson. “He gave the team the lift they needed.”

Blue Gardner started things off for the Titans scoring in the eighth minutes and Duke Sloan scored on a powerplay three minutes later for a 2-0 lead, but Mullen scored in the final second of the period to hold the Titans in check.

Dukeman scored during a powerplay in the second period for a little more breathing room, but Mullen responded to pull back within one keeping the Titans, and their coaches, on edge. Gardner eventually netted his second goal of the game scoring an empty netter in the final minute for the 4-2 win. Perkins finished the game with 15 saves.

“Mullen battled to the end and really pushed us,” says Watson. “I was not impressed with us defensively and we had a lot of good opportunities that we just didn’t bury. We did a better job of breaking out and on transitions, but we couldn’t bury it.”

The Titans return to the road to face Battle Mountain on Friday, January 27 and then return home to host Summit on Saturday, January 28 at 1 p.m. The game is also Senior Night so come out and support your senior Titans.