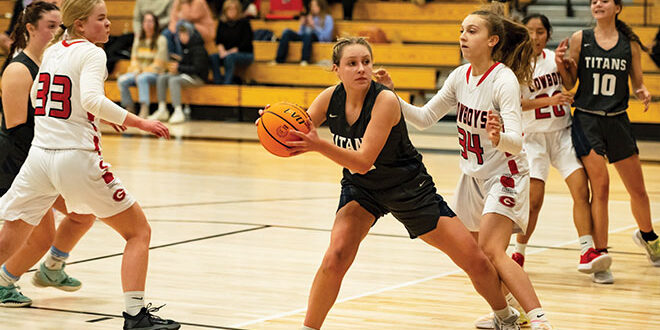 After falling to the Gunnison Cowboys 50-30 on Tuesday, January 17, the Crested Butte Titans girls basketball team bounced back to open league play with a 25-24 win over the Center Vikings on Thursday, January 19 and are now 6-3 overall.

Before we go there, I stand corrected. I claimed it was my belief after covering Crested Butte high school basketball since 1997, that when the Titans beat Creede last week 75-16 it was the most points scored in the history of the Titans girls basketball program.

It was not, as Emma Coburn and Emma Vosburg combined for 43 points enroute to an 81-22 Titans’ win over Moffat in 2008. Thank you Paul Holder for the correction based off stats by Bill Coburn. It’s good to have fans still reading.

Unfortunately, the Titans did not continue their scoring ways against Gunnison last Tuesday as they fell behind 30-15 by halftime. Down 32-16 early in the third quarter, the Titans put together an 8-0 run capped by a steal and lay up from Leigh Harpel to pull back into the game. Molly Miller came off the bench to pull down key rebounds, but the Titans offense started to sputter again in the fourth quarter as the Cowboys pulled away to seal the win.

“That game we didn’t execute on either side of the court,” says coach Amanda Reynolds. “We worked on a game plan and knew on paper what needed to be done, we were just not executing at all. That was a good game for us to prepare for league play.”

Bent but far from broken, the Titans regrouped during practice on Wednesday as they prepared for their first league game of the season against Center on Thursday, January 19.

“You never know what kind of team is going to show up to practice the day after a game like that, but they came out swinging,” says Reynolds. “We fixed some problems and made some adjustments.”

The Titans put their game plan into motion from the opening tip off against Center as they built a 7-0 lead that held the entire first quarter. They continued to build on their lead to take a 15-6 lead into halftime as Blakeley Reynolds was called on to shut down Center’s top scorer.

“They just did what was asked of them,” says Amanda. “They bought in and showed up and when Blakeley can shut down their top scorer, everyone else can execute their roles on defense.”

But the intensity of the game, and the setting, took its toll on the Titans as they racked up fouls throughout the first half that left Amanda to make adjustments on the fly to her line up.

“I couldn’t play the starting five in the second half because of foul trouble,” says Amanda.

Adding to their potential demise, the Titans top scorer thus far that game, Ellie Duryea, had to leave the floor following two big collisions as Center stepped up their physicality.

“Center got really intense with their full court press and it’s an all-out brawl when we play there,” says Amanda.

Center started to pull back into the game in the fourth quarter paced by their press and assisted by the Titans’ foul trouble eventually tying the game with less than a minute to go.

“The game had that feel that they were going to come back,” says Amanda.

But when push came to shove, both literally and figuratively, the Titans clamped down and Blakeley stepped to the free throw line to seal the 25-24 win.

“They have a hunger to show up and compete in those league games,” says Amanda. “They didn’t fold and they could have.”

League play continues this weekend as the Titans head to Sargent on Friday, January 27 and then host Trinidad on Saturday, January 28 at 12:30 p.m.

“Sargent will be a game and we’re missing Ellie for both games,” says Amanda. “But it will allow some other kids that I need to play more minutes, which we need because our toughest games have yet to come.”