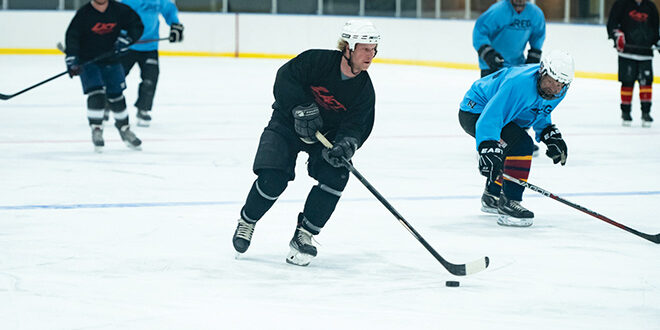 And here I thought I was going to witness yet another town league hockey blowout when Lacy’s Construction faced REG on Monday, January 23. Alas, I did not.

Lacy’s Construction is the self-anointed “new alumni team” by player and local hockey alumnus Montana Wiggins. And he may have something there as the team is stacked with locally bred Buttians with Wiggins, Nick Catmur, Nathan Lacy, Robbie Vandervoort, Jeff Snyder and the addition of Ryan Houseman in net.

That “local” energy carried Lacy’s through the start of the game as the aforementioned alums combined with teammates Sam Kay and Brandon Muller to rattle off three goals in the first five minutes of play.

It all started when Muller came out of the penalty box and picked up the puck to skate straight to net and score. A minute later Kay took a pass from Muller and held off a REG defenseman to shove the puck past REG goalie Luke McMullan. Thirty seconds later Lacy picked the upper 90 with a wrist shot and Lacy’s was up 3-0 and the game was looking, well, not so good. Unless of course you’re a Lacy’s fan.

But, as time wore on, REG gained some momentum. With Ian Dethloff, Jeremy Herzog and Justin Blair helping to anchor the defense, REG did a better job of shutting down Lacy’s attack while Ben Barocas, Matt Whiting and Michael Blunck worked to generate some offense. The shift in momentum resulted in a couple of shots for REG but Houseman made the needed saves to hold the 3-0 lead through the first period.

Still, something eerie was afoot at the Circle K and when the teams took to the ice for the start of the second period and Freebird was playing through the speakers at Big Mine Ice Arena, the stage was set for a REG surge.

But not before Lacy’s had one more goal to score and when Zachary Bever scored off an assist from Austin Noel 30 seconds into the second period, Lacy’s was looking comfortable with a 4-0 lead, almost too comfortable.

REG continued to gain strength as the period continued. Houseman was called to action for a couple of more saves, but REG finally cracked the seal on Houseman midway through the period when Barocas poked the puck past Houseman.

REG continued to push the pace and when Whiting showed he’s still got it by skating by one Lacy’s player and around another to score, we had ourselves a game.

Lacy’s looked to build a little breathing room with a powerplay to open the third period but that soon backfired as Whiting struck again to score a short-handed goal pulling REG within one of Lacy’s.

Lacy’s continued to struggle while REG’s composure and team shape helped them to mount several attacks and maintain over ice dominance. In the end, it came down to Houseman as he came up with numerous big saves down the stretch and Muller finally sealed the win for Lacy’s when he scored late in the third period for the 5-3 Lacy’s win.