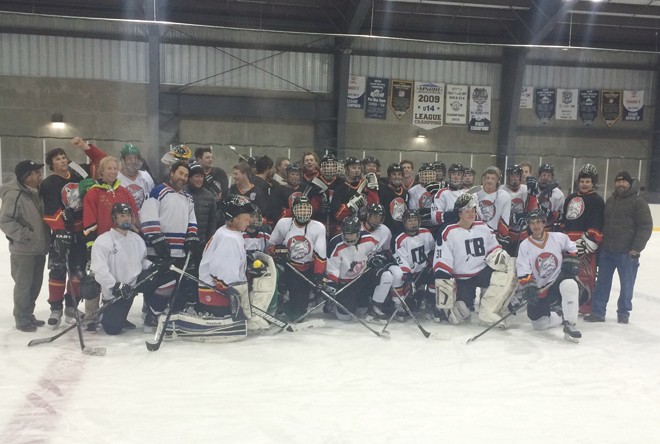 Wolverines come back from alumni assault to pull off win

Last year marked the first-ever alumni win in the long history of high school alumni hockey games and this year, on paper, looked to be the same.

In addition to the usual cast of alumni characters who were back for the holidays, the Wolfpack alumni team had the addition of four current Colorado State University players in the Reaman brothers, Dylan Curtiss and Ian Dethloff. So, one could only assume that the alumni would skate to their second win in a row.

Granted, the alumni bench was another junk show with as many as 20 players looking to get on the ice and former Wolfpack coach John Mortell doing what he could to herd the cats. But they attacked from the opening drop of the puck and kept the throttle pinned for as long as their collegiate and post-collegiate legs and lungs could handle.

After a Wolverines goal was waved off early in the game, the alumni went to work, but Remy “REM state” Zanatto was large and in charge in net, coming up with a flurry of saves to hold off the initial alumni barrage.

The alumni finally broke the seal on Zanatto’s net five minutes into the game when Robbie Holleran fired a shot from the high slot and Josh Melnick tipped it past Zanatto for a 1-0 alumni lead.

An alumni penalty (go figure) gave the Wolverines a power play six minutes into the game but alumni Isaac Evans and his headfirst hustle style of play paid off once again. Evans picked the pocket of an unsuspecting high school player and skated to net to score for a 2-0 alumni lead.

Things went from bad to worse for the Wolverines as chaos ensued in their zone while the alumni continued to press with reckless abandon. Defensive confusion gave up another alumni goal as Dylan Curtiss slipped his shot just inside the post and the alumni were celebrating their 3-0 advantage.

Once again though, the alumni started to fall apart at the seams, resting on the laurels of their 12 minutes of effort. Meanwhile, Wolverines coaches Joe Otsuka and Billy Watson were suited up and playing and took their game to the next level to bring a little parity to the ice.

After getting turned away a couple of times by alumni goalie Zach VanDyke, Otsuka opted for some old school chicanery with a skate-breaking move to drop one defenseman and then drove to the near post and played the puck off an unsuspecting alumni player and past VanDyke to finally put the Wolverines on the board. The alumni had one more chance on Zanatto when Ben Reaman broke free for a shot but Zanatto finished his stint in net with the save of the game, denying Reaman with a kick save.

The Wolverines took over from there, starting it off in the first two minutes of the second period. As Cam Curtiss took over for Zanatto in net and the freshmen players like Aiden Gunderson and Finn Wilson shook off the nerves and proved their ilk on the ice, the rest of the team settled into their roles and the Wolverines gained steam and scored two goals in the opening two minutes.

Patrick Seifert netted the Wolverines’ second goal of the game and then Michael Hensley fed Summit Wallace for a third goal to tie the game. Curtiss came up with a couple more saves, and fitness and organization proved tantamount to the Wolverines’ success. It didn’t hurt that they had Ashton Mabry and Danny Stoneberg providing a wall of defense either.

The two teams traded barbs and attacks for most of the second period and it became apparent that if the alumni didn’t reorganize, the game would get out of hand.

Well, they didn’t and it did.

Walker Carroll battled with two alumni players to win the puck and feed Hensley in front to put the Wolverines on top 4-3 heading into the third period.

More penalties plagued the alumni, though it never reached the level of previous years when there would be as many as six players in the penalty box at once. The Wolverines continued with their modus operandi, composure and calm, while the alumni fell into theirs, continued chaos.

The Wolverines took a 5-3 lead when Wilson ripped a shot from the point and Wallace tipped it by Montana Wiggins. Two minutes later, Seifert found Jack Collins open on the weakside with a pass through the slot and Collins scored to put the Wolverines up 6-3.

Enough was enough though, and with Sam Evans wreaking havoc for the alumni and the team settling down some, they started to regain the momentum. Their effort paid off when Jake Grogg fired a high shot and while Cam knocked it down, Sam Evans was there to poke the rebound in and the alumni were surging.

Just as they were poised to pull off the miracle alumni comeback, the Wolverines quashed any and all hopes for the alumni as Collins netted his second goal of the game and Otsuka put the finishing touches on the win, shredding through the alumni zone to score, icing the 8-4 Wolverines win.