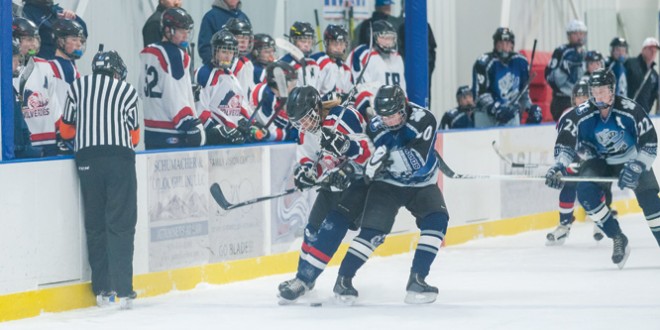 Over the past several years the Moffat County Bulldogs have wallowed in the cellar of the Colorado Prep Hockey League (CPHL) with the West Elk Wolverines rolling over them easily each time they meet.

As a result, Wolverines head coach Joe Otsuka felt that rather than line up his varsity squad for another blow-out win, he would call on the JV Titans team to face the Bulldogs while the varsity got in extra workouts.

In the end, the JV held their own, falling in the first game on Friday 4-3 and then cruising to a 6-3 win on Sunday to cap a frantic weekend of hockey for the young Titans team.

The Titans opened the game in Gunnison on Friday, January 8 flying up and down the ice and firing shots. The initial effort appeared promising but resulted in not a single goal in the first period. Whether the Titans were playing at even strength or in a 5v3 situation, they just could not find their rhythm on attack.

“I think it starts from the defensive zone and we were running around, chasing the puck and weren’t playing very disciplined,” says JV coach Billy Watson.

Meanwhile, Moffat County managed to capitalize on one of their handful of chances in the first period to take an early lead.

The Titans opened the second period with a power play and appeared far more organized on attack. While they failed to produce during the man advantage, their renewed effort spilled over and Ian Turner broke the seal on the Bulldog net battling with two players in the slot to punch home the puck.

Moffat County wasted no time in responding, winning the ensuing face-off and skating straight to the Titans net to score and retake the lead 2-1. The Bulldogs added a third goal two minutes later and while the Titans continued to set the pace of the game and fire shots at will, they remained disjointed both in neutral ice and in the attacking zone.

They finally found a finishing connection six minutes into the second period as Jakob Faison carried the puck to net, drawing the Moffat County goalie and slid the puck across to a wide-open Turner for his second goal of the game.

Moffat County took a 4-2 lead two minutes into third period and the Titans remained confused on the attack despite spending significant minutes in a power play. They finally broke through once more, relying on pure hustle to keep the puck in Moffat’s zone until Turner slipped into the high slot to get a pass, and spun for a shot to close the Moffat County lead back down to one.

But the game-tying tally eluded the Titans as Moffat County’s goalie proved spot-on in net, holding off their attack in the final three minutes of the game to hand the Titans a 4-3 loss.

“I think their goalie played well and gained momentum throughout the game,” says Watson. “I felt like we should have won that game. We just had too many little mistakes and they add up.”

The Titans then headed for Denver on Saturday to face CHSAA JV opponent Heritage. Unfortunately, an accident on Monarch Pass kept most of the team from making the trip, leaving Watson with just six players for the game. But the team reunited on Sunday, January 10 to face Moffat County one more time.

This time they made the most of the situation, striking early in the game to take a 2-0 lead on goals from Ethan Carroll and Sam Stepanek. The Bulldogs responded in the opening five minutes of the second period to tie the game 2-2 but Michael Hensley found the back of the net to rebuild the Titans’ lead.

The Titans then erupted in the final four minutes of the second period to fire off three unanswered goals. Faison opened the assault, scoring off an assist from Josh Wallin in the 13th minute. Wallin then tacked on a goal of his own one minute later and Dylan Frazier capped the outburst two minutes later with a goal, giving the Titans a 6-2 lead by the close of the second period.

Moffat County managed one more goal in the third period but the Titans were firmly in control of the game and skated to a 6-3 win.

“It’s still a work in progress,” says Watson. “We definitely have some things to work on in the defensive zone and continue working on the simple things and eliminating mental mistakes.”

The varsity Wolverines are headed to Denver for a tournament this weekend, while the JV remains in Gunnison for a game on Friday, January 15 at 6:45 p.m. and then two games on Saturday at 11 a.m. and 5 p.m.