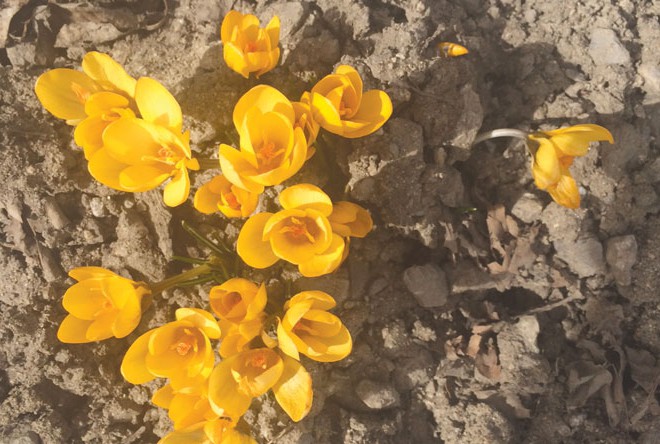 Why not put a dent in mud season?

As the first spring snow squall swept through town Tuesday morning, the sun quickly followed. Ahhhh, spring at 9,000 feet. It can be great or it can be somewhat miserable.

Or muderable. Crested Butte mud season is in full effect and as I walked the dog (on a leash, of course) through a quiet downtown Tuesday morning I thought about Eric Roemer’s request in last week’s paper to have the town pave some of the dirt parking areas in the town’s rights-of-way.

Mojo and I were engulfed at one point in a whirlwind of dust by the Company Store as a gust came through, picking up the dry dirt from the parking areas and lifting it toward Totem Pole Park. I am still picking the dust out from between my teeth. It was not the most pleasant of spring experiences.

Honestly, Roemer and I don’t usually agree on much but he was right about the mud. Cars were parked in the dirt and the mire and it was obvious that most drivers and passengers exited their vehicles into a slick mud patch.

Now, I really enjoy the downtime of a Crested Butte spring and mud season because it sort of takes me back to the summers of 20 years ago. It’s similar in busyness and feel. Spring is always rougher than winter or summer as the snow melts and reveals the warts before the annual summer clean-up takes place. I like that too. Spring makes the place feel like an old mountain town. It keeps it real.

But the place is different from 20 years ago. The town coffers are full and getting fuller with the new sales tax increase revenues bolstering the bank account. Maybe I’m getting soft but I like Roemer’s idea of spending some money on asphalt to spruce up the downtown by keeping down the dust and mud. It would not take away from the charm and would be a quick, easy and relatively cheap way to make a big difference in overall experience. A little pavement on the muddy parking areas could go a long way.

The cost of asphalt has remained static for the last couple of years. That’s unusual. If the price moves, it likely won’t move down. Crested Butte’s Public Works director Rodney Due said he has looked at numbers and it would cost in the ballpark of $7,000 to pave the half block of parking next to the Company Store. The cost would be similar for the parking by the Grubstake Building, the Museum and Donitas. The more of those half blocks you pave, the cheaper the cost. To throw in paving of the recently purchased lot behind Pita’s next to the Third and Elk alley would be about $21,000. So again, it is possible to do something nice and effective for a pretty cheap cost. But it is not up to Due. It is up to the council to set that direction.

The town prides itself on Elk Avenue and its unique downtown experience, which the council considers part of the parks system. More and more people (and cars and bikes) are packing the business district. So why not make it a little nicer for everyone? Focus on the town core area and if it works, the council can consider expanding the project in the coming years.

I really enjoy spring in Crested Butte. If the weather is nice, it is one of the best times to hang in town. But I didn’t enjoy the whirlwinds of dust Tuesday. The council reps might really look into doing something simple that makes the place better for residents and tourists alike.

Due said if the council wanted to do such a project this year, it could. But they would have to talk about it and decide this spring.

While the spring snow squalls might always be part of the Crested Butte mud season experience, downtown dust devils and parking in slick muck don’t have to be.