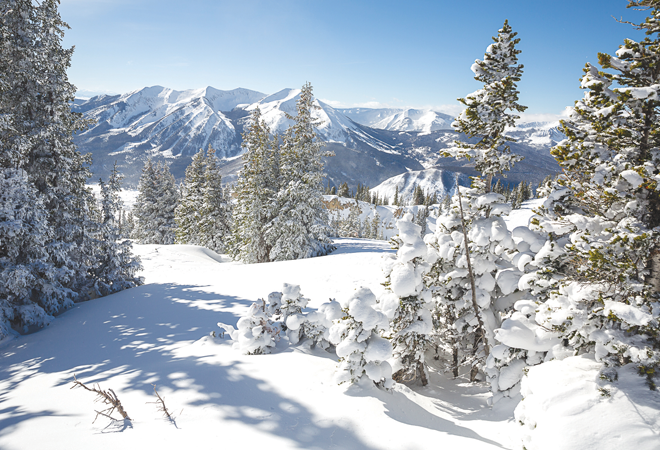 The good news is I found out last week that the hike out from the bottom of Paradise isn’t overly brutal. The bad news is I hiked out from the bottom of Paradise Friday because the lift was down for a long time at the end of the day. The good news is I discovered it was only a sweaty 15-minute hike to the Teo flats, where I could get back to the front via Houston. Put that in the back of your mind as it might come in handy. The other good news is that the resort got the lift running at about half speed and everyone made it home safely.

The good news is Crested Butte councilwoman Laura Mitchell said Monday she had heard President’s Weekend will be busy on the slopes. She said she had heard various reports—at least 5,200 people expected on that holiday Saturday but perhaps as many as 8,000. The bad news: “Don’t expect to ski much that weekend,” she said. The really bad news will be if 8,000 people find themselves choosing to hike out of Paradise to Houston because a mystery glitch shuts down one of the mountain’s primary lifts and Teocalli Lift isn’t there to save the day.

The good news is that the resort has announced they are putting in a new Teo Lift next year that will provide more capacity than the old one that is dormant this season. The bad news? While the senior CBMR management team is apparently discussing future improvements to the resort now that they’ve had some time to analyze exactly what it is they bought (surprise!), they haven’t announced much else and have said they don’t have immediate plans to do so. CBMR senior communications specialist Zach Pickett said management is in the assessment phase. “The Senior Leadership Team is continuing to assess the best opportunities to improve the guest experience and if/when we have more to share about other investments, we’ll be sure to do so,” he said in response to my questions over future lifts, terrain expansion and base area lodge improvements.

The good news is the town of Crested Butte has a pretty strict code of conduct to allay public fear that the council is acting in bad faith through conflicts of interest. The bad news is that it pushed out an active councilman in Kent Cowherd, who had to choose whether it was better to take jobs as an architect with projects in town or continue to make about $3 an hour as a member of council. He chose to make a living in his profession. Cowherd put a lot of thought and time into his role as a council representative and he will be missed. The bad news is that the town is essentially telling a segment of citizens it will be hard for them to step up in the role of representative if they have business with the town.

The good news is the two north valley town councils came to a consensus over bottom-line limits they want to see on the property they partially control at Brush Creek. The bad news is the developer who has essentially an option on the property doesn’t like the limits. So now we’re all in a bit of affordable housing limbo. But the really bad news is that the process has been one of dysfunctional contentiousness instead of positive partnership and I don’t see that changing. It is unfortunately the personality of this particular project and process. It goes back to Mt. Crested Butte mayor Todd Barnes’ observation that if this is the way a couple treats one another when they are dating, what is it going to be like when they are married? Ewww. Dysfunctional couples are always so much fun to hang around. Frankly, I don’t see a lot of good news there except for the lawyers making bank.

The good news is the town of Crested Butte is reevaluating how to handle “teardowns” in town. The bad news is that it is tricky. Does it become that every structure in town is untouchable once it is built? Some of the houses constructed in the 1970s and 1980s look like they were built by someone like me who has trouble remembering the difference between a circular saw and a jigsaw. Insulation? It’s a budget buster. But those places are where many of us lived when first getting here as a ski bum because they were cheap (and cold). If the cheap places to live in town go away for ski bums—and they will just because of free market forces — and the dysfunctional Brush Creek relationship can’t agree that consensus is better than bickering all the time, then this community changes from a place with a blue collar twinge to just another glossy resort for rich people wondering why they can’t find someone to shovel their decks.

Is there any good news in what appears to be a bad news decision by a group in the early stages of forming to possibly pursue a recall of some of the county Met Rec board? That’s doubtful because if the idea of a recall goes from thought to reality it will take time and money away from the district itself. Everyone up on that board has been pretty direct with what they want to do. Lord knows, that district is wallowing in dysfunction at the moment as individual board contentiousness is overshadowing real positive steps. A recent election sent a clear direction from the people to maintain TV and spend money on local recreation projects. Simple. That’s what the people want. My advice for those dissatisfied with members of the board is get organized for the next election, state your case and try to get elected.

The good news is we are having a real winter. The bad news is the backcountry can be tricky. So be careful. And despite good snow, Blue Mesa is still really low and the county remains in a serious drought.

This has always been a place where people took the bad news and dealt with it. It’s about perception and making lemonade out of lemons.

Walking out of Paradise burned enough calories to probably let me have another beer without gaining two more pounds. Thanks CBMR!

The new resort owners talking about what’s needed to improve the ski product? There’s plenty to choose from.

A busy President’s Day Weekend? It could mean it is time to get the Nordic skis back out for a day or two.

Cowherd resigning? At least he did so with the best interest of the town in mind.

Brush Creek? With two-council consensus there is more clarity for what’s acceptable and now an opportunity is there to make it happen instead of continuing to wallow in what-ifs and accusations.

Look, it is rarely easy here, but it really isn’t that hard. It’s all good news / bad news in the valley.

Share
Previous Benchtalk: February 8, 2019
Next A UNICORN WALKS INTO A BAR