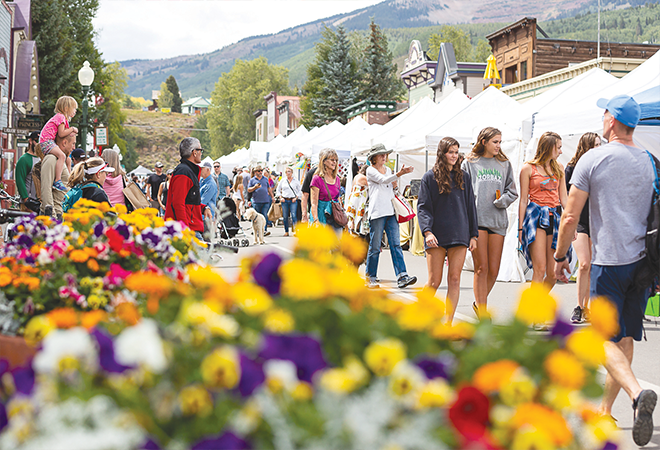 Affordable Art for the People

The Crested Butte People’s Fair celebrates its 35th year this Labor Day weekend but it essentially has its roots in the original Arts Festival in the summer of 1971, when Crested Butte was a wilder west and the event was a pleasant, sunny, dusty-day blur.

When the newly relocated hippie artists and musicians of the 1960s moved into the old coal mining town, they tuned in and turned on to sell their crafts and play their music—long-haired, smiling faces stringing beads into a matrix lace of necklaces and hammering silver and copper wire into dangling twisted earrings, all in a cloud of incense mixed with the dust of dirt streets and coal.

Those early unstructured and simplistic festivals ushered in the era of Crested Butte as an artsy ski town, growing into a sophisticated community of art galleries, music venues and festivals, the Crested Butte Arts Festival and of course the new Crested Butte Center for the Arts.

The People’s Fair is the true continuation of those early artisan festival days.

The People’s Fair is hosted and sponsored by The Paragon Art Gallery, home to a collective of local artists of various mediums. Megan Craver, director of Paragon Gallery’s People Fair, says, “Paragon has prided itself on bringing in all-local and all-Colorado-only artists for this fair. It’s more of a fair for the people, in keeping the art affordable.”

The Fair runs Saturday, August 31 and Sunday, September 1 from 10 a.m. to 5 p.m. and this year the shindig will have even more delicious food vendors.

Back again with birds of prey are Nature’s Educators, who have three full-booth spaces to show off their amazing rescued wild birds and reptiles. “We love having them and they’re able to raise awareness for their cause and raise money to help them continue their programs to protect and rehab birds and reptiles,” Craven says. The exhibit is one of the most popular at the fair.

The over-the-top favorite event at the Fair is Oh-Be-Dogful’s contest for the canines. The dog show is held at 3 p.m. on Sunday, on Third Avenue at Elk. Contestants and their owners compete for prizes in the costume contest, agility course, and talent show with Best in Show for each category.

“I’m most excited about the immense variety of craftspeople this year,” Craver says. “The other great thing is that it’s not a juried show, so we just accept the first 80 applicants,” she says of the always-sold-out event that has an artist wait list. The applications for artists to participate in the fair are available beginning April 1 every year. Locals are encouraged to apply early by visiting the gallery in person to pick up an application beginning March 1.

“Since the gallery puts this on, it’s a group effort and every member of the gallery helps out in some way, whether it’s hanging posters or making gift bags,” Craven explains. As part of welcoming the artists to the fair during check in, all vendors receive a gift bag containing Acli-Mate energy drink mix, Clif bars, a water bottle and other swag to help them in elevation adjustment, especially if they’re arriving from a much lower elevation. The handmade bags all carry Paragon’s logo.

Music has always played an enormous part at all the People’s Fairs. This year Bruce Hayes, who has not only played the Fair for years but also booked its excellent musicians, returns to the stage at Third Street along with the Gypsy-flavored sounds of Roma Ransom. With Bruce Hayes doing his upbeat show, there will surely be guest appearances of local crooners and musicians.

Roma Ransom began as a musical group after Grace Anne Easley and Gordon Ralph Dean Lewis began busking on the streets of Springfield, Mo. The two fell in love and took their act on the road, traveling throughout the U.S. They eventually relocated to Colorado Springs in 2011 for more musical opportunities. Their love of diverse music from every culture led them to emulate the sounds of different genres including country, pop, R&B, reggae, klezmer, Balkan, classical, avant garde, contemporary, jazz, cha-cha, rumba, Nepalese/Tibetan, Middle Eastern, gypsy, funk, and soul. They feel their music is best described as eclectic Bohemian world-psych-folk. The music coincides with the fair’s hours of 10 a.m. to 5 p.m.

The Paragon Gallery will have three permanent memberships open this year for local artists. “The gallery will hold a jury for new members and we ask artists to submit an application with art examples. Everyone takes a turn working at the gallery in order to keep expenses down,” says Craver. This enables Paragon to pay rent, do general upkeep, and give artist members a larger percentage for their sold works of art. Artists interested in joining the collective should apply as soon as possible since the decision process will begin by the end of September. Applicants can stop into the gallery from 10 a.m. to 9 p.m. daily in the Old Town Hall on Elk Ave. at Second Street, go online to the website (paragonartgallery.com) or call the gallery for more information at (970) 349-6484. Paragon closes for six weeks during the off-season, reopening around Thanksgiving.

Craven hopes the turn-out is once again stellar this year, saying, “It means a lot to all the artists to have the support and we keep it as affordable as possible for the artists. They put their heart and soul into the art they make. We get good feedback from the town because we keep it so small, fun for the whole family and we’re dog-friendly.” And that’s what makes the People’s Fair truly local.

For more information online go to Paragonartgallery.com. Bruce Hayes can be found at bruce@brucehayes.com. Find Roma Ransom at romaransom.com.

Share
Previous FEATHERED FINALE
Next Weinberg appointed to GCEA board