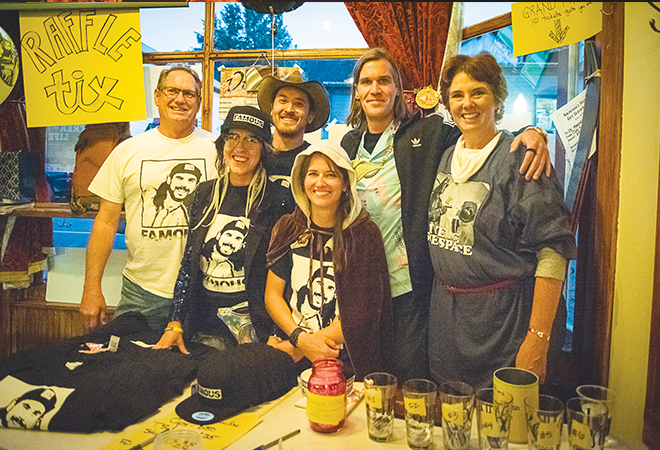 It is the busiest weekend of the fall season as Vinotok is coming to its fiery climax. There are still lies to be told, community feasts to be eaten and Grumps to be burned. So grab your headdress, visit the altars located around town and join in the festival that celebrates the autumn equinox! See the schedule on page 18.

The Crested Butte Land Trust is hosting its final stewardship education day on Saturday, the 21st. It begins at 9 a.m. There will be discussion with a local rancher on caring for ranchlands and the future of agricultural stewardship in Crested Butte. Meet at the Four-way Saturday morning.

Kicking off the Center’s week the Crested Butte Film Festival lets you look behind the curtain into the goodness to come September 26 – 29 in their Sneak Peak with the film Metamorphosis (Thursday, September 19). Don›t miss the Inaugural Battle of the Bartenders Cocktail Competition with 11 competitors and a bunch of Montanya Rum pouring their best for the title championship. Complete with appetizers, live music, and visiting and local judges, this is sure to become a new fall favorite (Tuesday, September 24). Get ready for the Iron Pour Saturday, October 5 by participating in any one of the Scratch Block events at the Farmer›s Market (Sunday, September 22) or the Center (Tuesday, September 24). New this year is an Iron Relief Sculpture Workshop (Tuesday, September 24). Open Art Studio is a new visual arts series keeping you creative throughout the fall with a rotating menu of artistic topics every Thursday September 19 through November 21. This week features watercolors (Thursday, September 19) with separate sessions for adults and then middle and high school students.

Want to work for the US Forest Service?

The Rocky Mountain Region of the USDA Forest Service has announced the availability of over 900 temporary jobs for the 2020 field season across national forests and grasslands in Colorado, Kansas, Nebraska, South Dakota and Wyoming. Temporary jobs are available in a variety of exciting and rewarding occupations such as fire, trails, forestry, timber, range, engineering, wildlife, hydrology, recreation, fisheries, archaeology, botany and customer service. A list of available temporary jobs on national forests and grasslands across Colorado, Kansas, Nebraska, South Dakota and Wyoming is online at www.fs.usda.gov/detail/r2/jobs.

Eat a taco with a Democrat

The Gunnison County Democrat Party invites all who wish to join them at their Free Unity Tacos Picnic in the Park at the end of September. Bring a friend! Bring your appetite! Bring a drink, or a dish (if you’d like). The event will take place at Meadows Park in Gunnison behind Wal-Mart on Saturday, September 28 from 4-6 p.m. Hear updates from prominent elected officials and get answers to your questions all while enjoying a taco!

Cameos: What is your best advice for a new mountain biker?