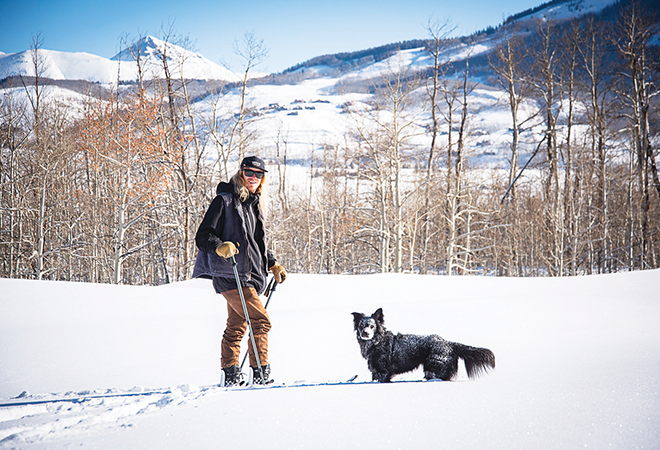 Riding the wave of life

Once inside the door of Mountain Tails, you’re greeted by a lively black Aussie-border collie named Aura, who will dare you to throw a somewhat slimy, tattered dragon clenched in her smiling mouth. Behind the counter sits her master, Brandon Johanns, the store manager, who has the low-down on the best nourishment, toy, collar or costume for your fur baby, be it canine or feline. Brandon fell in love with his puppy after Aura, one of a litter of eight, ran up, jumped into his lap and then fell asleep. And with that, he knew they were meant for each other. “Working at the pet shop, I wanted a dog and was dreaming of an Aussie-border collie and the litter in Crested Butte South was just perfect timing.” Like most locals, Brandon is multi-faceted with a myriad of life stories and experiences.

A native son of Colorado, Brandon was born and raised in Colorado Springs. His father was a medical lab tech and later became a medical business administrator. His mom was crafty and artistic, a flower designer and interior designer. Growing up, Brandon’s family stuck pretty close to home with family vacations spent in places like Breckenridge and the Four Corners area. “I was really into school sports and ran cross country and track. My friends and I rode mountain bikes, BMX and did mountainboarding.” The latter, which he explains for the uninitiated, is like a snowboard with big off-road wheels. “It’s a really big skate board that you can strap into. We’d go find grass hills and mountain bike trails and go to the U.S. Open Mountainboarding competitions in Aspen.”

He tells that mountainboarding was started by two guys in Colorado Springs and is very big in Europe and Japan. In his early teens, in the mid-1990s, Brandon went to work at MBS mountainboards. “They paid in equipment and since we weren’t rich kids and couldn’t afford $500 boards, it was super cool.” He’d compete in Aspen and travel to other competitions in California and Kansas. “It’s really like a hillbilly underground sport,” Brandon laughs.

Brandon had his sights set on going to Western State College (now Western Colorado University) when he graduated from high school in 2005. He had already met with their cross country coach, who had invited him to join the team during his high school meet and greet. “But my dad heard it was nicknamed ‘Wasted State’ and nixed it, which is funny because I wound up here later anyway.”

Brandon instead enrolled at CSU in Fort Collins. “I was into psychology and they had a good cross country team too,” but the training was intense. “I got really burned out. The training was too much. I couldn’t balance my studies.” So he quit running and dropped out of the team to focus on academics, which opened up a bunch of free time, time that he used to pursue a new sport. “I started snowboarding. We’d go all over Summit County. I had only snowboarded a couple times when I was growing up.”

In the summers, he’d mountainboard and when the snow started flying again he became passionate about snowboarding, so much so that his studies became secondary.

“At CSU I was having trouble with math because there was no teacher. The class was done all on computer so I took a class at Front Range Community College, where there was an actual teacher. I was also able to take art classes, which I couldn’t do with my major at CSU.”

Brandon discovered that he had an interest in photography and signed up for a film—not digital—photography class. “Suddenly I was getting A’s.” At the end of that summer he dropped out of CSU to pursue photography, signing up for classes at Red Rocks Community College. “It made me really happy and it was the most enjoyable couple years of my life. I was learning and successful.” He also took a job at Elway’s in Denver. “Denver living was pretty cool. I enjoyed it. I had never lived in a big city. Colorado Springs doesn’t really have a city culture.” After finishing his photography studies, Brandon began freelancing as a wedding photographer and for Snowboard Colorado magazine.

He had still never been to Gunnison or the valley. “I had a mountainboard friend who had moved to Crested Butte and kept telling me that I needed to visit for Soul Train, so we drove from Denver, went to Soul Train and I had a really great time. I watched the Grand Traverse start at midnight. The next day, I fell in love with Crested Butte. I had run into a CSU college friend on Elk Avenue, Lulu Nelson, and we went and hung out. My friends were at a Grateful Dead tribute band at the Center for the Arts and because the show was almost over, they let me in.”

What moved him was what he saw inside. “There was a group of people dancing together like I had never seen before, they were dancing with so much joy and bliss and comfort. I felt that I had found a place I never knew existed, where people could be more authentic and be comfortable in their own skin. Living in the city, people were so self-conscious but here, they didn’t care, they were just having so much fun dancing together.” He packed up and moved to town during the winter of 2012. He started as a lift op and put out a roommate call on Craigslist. “I got a call the next day, and I moved into the hippie house on the mountain,” and he laughs that he’s been living there on and off ever since.

Brandon was also curious about inner spiritual work. “I wanted to put some energy into my spirituality, explore myself and what life is a bit more so I signed up with Judy Theis to study Reiki. I received my Reiki 1, 2 and 3 [certifications] as well as learning about how to ride the wave of life. It taught me a lot about myself and reality as well as healing past trauma.” At the same time during his first year here, he was exhibiting his photography at the now-defunct ArtNest. “It was such a cool collective and fun to meet all those creatives.”

But when his housing situation fell through, he ended up moving back to Colorado Springs. “I couldn’t find housing in Crested Butte. It was my first off-season experience and I didn’t know what to prepare for. I moved home and did construction work and saved up money. Then my buddy in Brooklyn invited me to come live with him. Photography played a big part of the decision since my buddy was the webmaster for Complex Magazine and had a lot of connections to big-name photographers. I got to see inside the industry and do more studio shoots that I hadn’t really done professionally before. We were shooting album covers and celebrities for magazine covers.”

The position, like many apprentice jobs, didn’t pay and you were expected to be thankful for the opportunity and experience. Brandon’s entrepreneurial spirit kicked in and to make a living in NYC, he came up with a fabulous idea. “I would sell Polaroids to people walking across the Brooklyn Bridge. They’d get a photo of themselves and the whole iconic bridge in the background. I could make over $100 in two hours. For a while I thought Polaroids were going to be my art form because although it wasn’t digital, I didn’t need a darkroom.”

NYC, he recalls, was good and bad. “The subway, the energy and the traffic got to me. I was never worried about anyone messing with me, but the crowds and being in a tube underground… There were days I chose to stay in the apartment because I needed to decompress and recharge. I ended up spending a lot of time in the Greenwood Cemetery,” he says of one of the most beautiful and peaceful places in Brooklyn and the city.

And he also loved going to the art galleries, which, he says, “Were epic.” After four months of living with his friend in the Park Slope section of Brooklyn, he realized the expenses of moving out and having his own place were more than he could afford. He had had his fill of NYC, plus, he was missing his Colorado, the lifestyle and its mountains.

Brandon landed in Boulder and worked at Natural Grocers as bulk foods manager. “In one year, that job taught me everything I needed to be manager at Mountain Tails.” He did a pop-up gear shop for Pearl Izumi, setting up at each stop of the U.S. Pro Challenge bike race. It gave him enough cash to move back to Crested Butte. “A room had opened again at the hippie house and I swooped back in.” It was the fall of 2015 and Brandon took a job working at Acme Liquor and also as a diver at Elk Avenue Prime. Mountain Tails had hired him to work a couple days a week but they quickly offered the full-time manager position to him when it became available. “When people come in to the store, they’re in such a good mood. I get to spend time chatting with people, especially the locals during the slower times. I get to spend time with their pets and the merchandise is super fun. I get to order toys and the cool collars and it’s all fun. I’m so grateful for that.” He’s been there over four years now.

This year, Brandon ran the Cart to Cart, a trail racing series. “I want to keep running and racing. I got back into running after 10 years of not doing it and one of my favorite things is running the trails here in the summer.” He’s run the Grin and Bear It, Living Journeys Half Marathon, the Park to Peak to Pint, placing second in the entire series the past two years. Of course, he’s still snowboarding in the winter and just discovered his love of splitboarding. “I’m just learning to get into the backcountry, and took my Avy-1 course with Irwin Guides.”

Brandon is home here and he feels satisfied. “I don’t see myself leaving Crested Butte because it has everything I want. Housing is really scary though because there’s not enough affordable housing. The big dream is to one day be a homeowner but I don’t know if that’ll ever happen. I love the hippie house, the location and my roommates, but it would be nice someday to have no roommates or just one roommate.”

For the time being, Brandon is living the dream, a boy and his dog. “I’m really looking forward to taking Aura running with me,” he says, now that she’s almost a year old, “and revisiting places and exploring with her.”