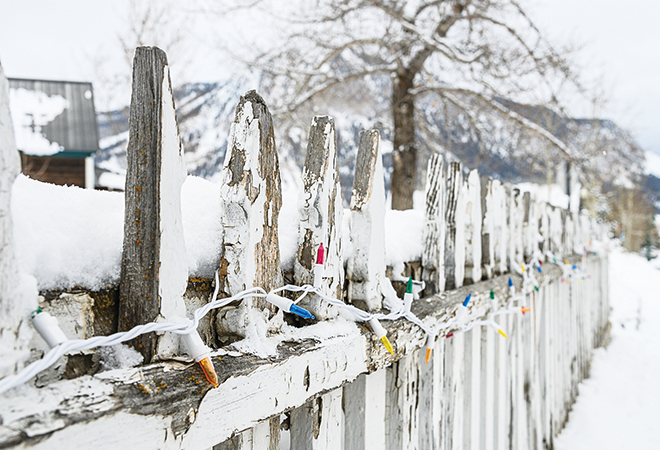 It didn’t feel super crowded this past holiday weekend. It was busy but not elbow-to-elbow. That could be because the Front Range areas had more snow than we did and the Front Rangers who packed the resort last Presidents’ Day Weekend are sophisticated enough to go where the snow is falling … which was us last year and Breckenridge this year. Epic Pass holders can be nimble and people don’t need to make reservations weeks in advance like the old days. So they don’t. Still, Mountain Express reported that the buses carried 19,300 passengers over the three-day weekend, compared to 20,100 in 2019.

As a guy who spent part of Tuesday shoveling thick ice chunks off a deck from a roof slide, here is a reminder to look at your roof. While this winter seems very mellow compared to last year, the warm freeze-thaw cycles have made for some surprise ice dams around town. When it warms up again (and it will), that surprise ice might slide and that could seriously hurt someone … so look up, take note and be aware.

Some great local events are coming up and while you probably can’t get to all of them, most are worth trying to see. Some are cool, some are exciting, others simply fun. One of the most sought-after tickets of the year is the Move the Butte performances that take place this week. The dance performance seems to have spoken to the community, as it is extremely creative, totally engaging and Crested Butte-inclusive.

The Crested Butte Titan boy’s basketball team is finishing out the season this week before playoffs. They seem to have a chemistry that is surprisingly poised and exciting at the same time. They are causing a stir in the league and real excitement for sports aficionados in town.

The Crested Butte professional ski patrol Wall-to-Wall (Attitude Adjustment) party that benefits locals in need used to be a rager at Rafters. While there will still be a few hangovers the next day, it is now more a chance to see some old friendly faces, share a beer, win a prize and touch base with the patrollers who keep a great ski mountain open.

And then, of course, there are all the spring standards like the Red Lady Ball, Soul Train Night, the Grand Traverse and the Al Johnson…

Ever since there was a cry from some political and government officials for the idea of paid parking or even a parking garage in Crested Butte a few years ago, I started consciously looking to see if the need to be more like Breckenridge was real. When I walk or drive Elk Avenue I deliberately look to see if there are parking spots available. With the exception of a few really busy summer days or when Elk is closed for an event, there are almost always open spaces. Even in the heart of Elk Avenue between Second and Fourth Streets there are regular places to park.

No doubt some business owners and their employees take up Elk Avenue space near their stores and restaurants for convenience, if not sound business practice. And there might be an hour during the busiest ski season evenings where parking is super tight when families flock downtown for dinner, but not often. I counted five open spots last Saturday during Presidents Day weekend at about 6:30 p.m. It is rare to not see an open spot within a block of any destination. So when I hear proponents of paid parking or parking garages express the “need” for parking mitigation measures, I try to think about cost-benefit and the real “need” to spend time and money on that effort. I’m not seeing it.

Another thing I’m not seeing is the second-home tax proposed by some in the valley to fund climate change and affordable housing projects. It isn’t the right avenue in this community at this time. It’s a divisive idea and there are other ways to address the needs. It feels like the majority of the Crested Butte council is more open to those other ideas and less enthralled with this vacancy tax proposal. Good for them. They’ll talk about it again in March.

What’s up with the vacancies in local workforce housing units? There are at least eight up at this end of the valley right now. Income restrictions play a role and fitting into the open puzzle piece isn’t always a given. Government red tape is a contributor, as are rules like no dogs and no weed. I know there has been some recent worry that all the affordable housing projects in the pipeline will not fill up in a timely manner and leave local governments holding the debt. Others seem to think we could build a thousand more deed-restricted units right now and they’d fill up in a second. I don’t buy it—plus, bringing that many more people to the valley to fill the units would require more workers to service their needs.

When you consider the housing projects in the city of Gunnison, Crested Butte and Mt. Crested Butte, there are literally hundreds of potential workforce housing units on the drawing board and in the pipeline. The timing of them all needs to be coordinated so that the vacancy rates don’t pile up because there could be, God forbid, a glut of affordable housing units. Could it be that maybe all that Brush Creek controversy that delayed and then cancelled the project actually saved the developer a boatload of money? We’ll see.

Workforce housing will always be an issue in the Valley, especially in the increasingly expensive north end. Perhaps it is time for a dedicated point funded by all the local governments to focus strictly on making affordable housing really work up here.

I must mention that while it is early, watching the initial public stages of the North Village project that could entail a lot of significant workforce housing in the town where a lot of the jobs are located is refreshing to see.

I love these early spring days where temperatures rise and outdoor conversations linger. Walking from one end of the town to the other, normally a 10- or 15-minute endeavor, can take twice that as it is easier and actually comfortable to stop and chat. We are hopefully beyond the days of minus 30 with wind and burning lungs. Now we can enjoy those afternoons filled with sunshine and temps in the plus 30s. Ahhh.

I have on my phone a quick video of the Crested Butte ski patrol rescuing some Front Range snowboarder from Body Bag last weekend. I’ll shake my head at those tourists who don’t seem to believe the copious and blunt warning signs at both the High Lift and NFL. They have to see them since there are about a half dozen at each lift and more scattered throughout the Extreme Limits. So a strong reminder that if you cannot ski and board extreme terrain that includes lots of cliffs, rocks and steep slopes—stay on Paradise. Intermediate skiers should not be in places called Body Bag, Total Recall or Dead Bobs. What’s wrong with staying in a place with a name like Paradise anyway?

One final reminder and observation: The sun is staying in the sky longer these days and it is stronger. So don’t forget to wear your sunscreen. Enjoy what is traditionally the finest snow of the ski season. Happy end of February, everyone.