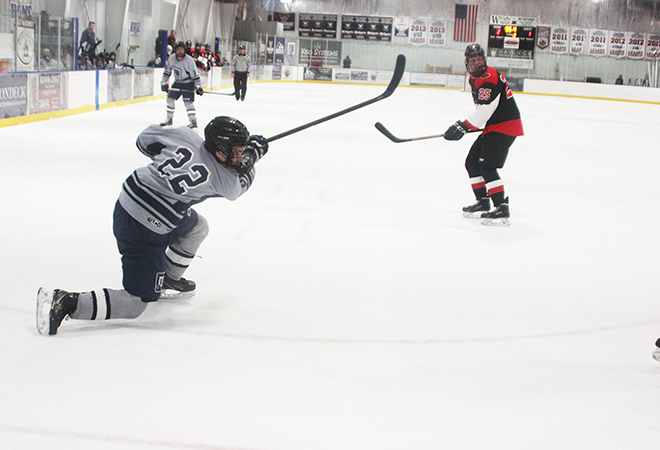 It was quite the week for the Crested Butte Titans hockey team with both games going into overtime and the Titans coming out of it with a win and a tie.

Coach Billy Watson admits the season thus far has had its fair share of ups and downs. Some games the Titans are firing on all pistons and flying up and down the ice and other games they find themselves in a bit of disarray and frustrated.

In addition to working things out among the players, Watson also turned to statistics looking for some insight and found some interesting facts. Last season all lines besides the first line had racked up 58 goals. This year, all lines other than the first line had scored just 10. As a result, Watson shook things up moving defensemen Jack Lambert up on offense.

“I’m just trying to get more production on offense and I thought he’d be a good asset,” says Watson.

The Titans headed to Windsor on Wednesday, February 5 to face Resurrection Christian and after a scoreless first period, both teams got rolling in the second period combining for over a total of 35 shots and four goals.

Crested Butte opened the scoring in the second minute when Elijah Waters scored off assists from Matthew Trujillo and Owen Whiting.

“Getting a goal out of that line on that first goal was massive,” says Watson.

Resurrection Christian tied it up four minutes later but the Titans power play came through as Matthew Solanik assisted Chris Myers on a goal to go back on top 2-1.

Resurrection Christian tied the game once again in the final minute of the second period but the two teams failed to find the back of the net in the third period sending the game into overtime.

The Titans opened the overtime with a penalty but killed it off and when Resurrection Christian was popped for a penalty, the Titans sealed the deal during the power play as Myers assisted Lambert on the game-winning goal.

“It was pretty good getting the game winner in overtime,” says Watson. “A win’s a win.”

Crested Butte then returned home to host Glenwood Springs on Saturday, February 8. Glenwood had just handed the Titans a tough 5-2 loss a week prior, sitting in second place in the conference standings.

Glenwood struck first midway through the first period scoring on a power play but Crested Butte fed off of the deficit to pick up their game and start outplaying Glenwood Springs. The effort set up several chances for the Titans the rest of the period but Glenwood’s goalie came up big to maintain their one-goal advantage.

Crested Butte continued to push and while Glenwood’s goalie proved on point, the Titans eventually broke the seal on the net as Lambert scored on a power play and Solanik slipped into the slot on a shot by Colm Piccaro to poke the rebound in for a 2-1 Titans’ lead.

“The kids did a good job responding and not getting down,” says Watson. “We had a better net front presence in the second period and that created good things.”

The game then turned into a middleweight bout in the third period as the two teams traded off taking shots at each other. Glenwood tied the game back up in the sixth minute but Crested Butte answered right back in the eighth as Lambert scored off an assist from Joseph Stock during a power play. Glenwood then looked to put Crested Butte away scoring the next two goals to go up 4-3 with four minutes left and the game looked to be slipping away but the Titans effort paid off as Graham Barrett tied the game up with 90 seconds left in regulation finishing with a 4-4 tie. Goalie Shaughn Rourke finished the game with 37 saves.

“It would have been easy to roll over but they stuck in there,” says Watson. “It was a good tie and I was really proud of how all of our lines and Shaughn stepped up. That’s what we needed moving forward with the playoffs just two weeks away.”

Crested Butte closes out the regular season on the road as they head to Denver to face Kent Denver on Saturday, February 15 and then wrap things up against Battle Mountain on Friday, February 21.