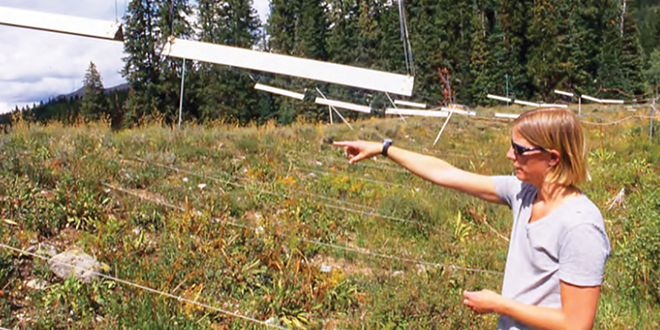 The yin and yang of carbon, Part 1

Editor’s note: This series looks at The Warming Meadows experiment that began at the Rocky Mountain Biological Laboratory (RMBL) in 1991 and foretells the possible effects of a warming climate. This week recalls the history of the renowned experiment at RMBL and its alarming potential for eventually fading wildflowers in the North Valley.

This story from reporter Allen Best is from Big Pivots, an e-magazine focused on climate change, energy and water in Colorado. For a free e-mail subscription, go to BigPivots.com.

An experiment called Warming Meadows ended a year ago. For 29 years, day and night during every season, shoulder-high electric infrared radiators directed heat downward to warm the top six inches of soil on half of the 10 plots staked out between two stands of evergreens. This is on a ridge overlooking the East River, five miles from the Crested Butte ski area.

Unique at its launch in January 1991, the experiment at the Rocky Mountain Biological Laboratory (RMBL) was the world’s first attempt to foretell the effects of global warming on the natural environment by the mid-21st century. It accomplished that. Anybody who treasures the shimmer and glow of mid-summer’s pageantry of wildflowers in Colorado’s high country should be alarmed.

The experiment assumed increased temperatures of 2 degrees Celsius (3.6 degrees Fahrenheit). Those temperatures will almost certainly occur by the middle of this century given the continuing accumulation of greenhouse gases in the atmosphere. The planet altogether has already warmed 1.2° C since the start of the industrial era, in some places—including higher elevations, and those inland and at higher latitudes—more; and other places less. Given a doubling of emissions, according to a study published in the Reviews of Geophysics, we can expect temperature increases of between 2.6° and 4.1° C (4.1° to 8.1° F).

Summer’s broad smile will dull with these rising temperatures as the broad-leafed forbs that produce the rainbow of wildflowers give way to more muted sagebrush. This is a story that Warming Meadows from its location at 9,400 feet in elevation has told quickly, vividly.

From the beginning, John Harte, the scientist who conceived of Warming Meadows in the waning days of the administration of Ronald Reagan, understood there was a deeper story, the interplay of atmosphere and soil.

Changes in vegetation carbon are not as likely to result in atmospheric changes as are possible changes in soil carbon. “We should look to the soil for potentially very large effects.”

The question, in other words, is whether the warming climate causes more carbon to be transferred from the soil to the atmosphere in coming decades as sagebrush replaces the forbs. If so, that could in turn accelerate warming.

Understanding this feedback is crucial to creating global climate models that can help predict what will happen in mountains, not just in Colorado but across the planet.

From silver to biology

The laboratory itself is at a one-time silver mining camp called Gothic.

Never robust with mineral wealth, Gothic was decaying back into the wilderness in 1919 when visited by a biology professor from a nearby college then called Colorado State Normal School. It’s now called Western Colorado University.

Enchanted by the diversity of ecosystems, the professor, Dr. John Johnson, returned with students and in 1928 set up a field station, and what is now called the Rocky Mountain Biological Laboratory was founded. Professors and students from across the continent have been returning ever since to conduct studies from these old mining shacks now supplemented over the decades by other, still modest offices and dormitories. They call the Rocky Mountain Biological Laboratory by its acronym, RMBL. It’s pronounced like the sound of distant thunder: rumble.

At any one time, about 200 experiments are under way at RMBL. One study launched in 1962 was of the yellow-bellied marmot, and it has been followed by 225 since then. At the start of the 21st century, researchers noted that the marmots were emerging from hibernation 38 days earlier than they had about a quarter-century before. None of the studies, though, have gained the same attention as Warming Meadows.

Harte, a physicist turned ecologist from the University of California–Berkeley, wrote his first paper about global warming in 1970. By the 1980s, he had begun pondering the future effects of greenhouse-gas emissions and land-use changes.

“Predicting future climate entails more than just knowing about the physics of heat and light, air and water,” Harte wrote in Ecosystem Consequences of Soil Warming, a 2019 book with contributions from multiple authors.

“Ecosystems are a big player as well,” he wrote.

In his chapter, Harte describes the importance of what goes on underground and also feedback effects.

In this truly complex system, as ecosystems are altered by climate, the climate is in turn altered. These feedback effects can only be understood and reliably incorporated into climate models if we first understand how ecosystems respond to climate change.”

This “need to unravel this complexity, to characterize climate-ecosystem feedbacks” motivated Harte in 1988 to start assembling Warming Meadows. At Gothic he chose land tilting southward on a ridge maybe a football field away from the road to Crested Butte. Being on the ridge was important to prevent delayed runoff of snowmelt. In this small area he laid out 10 plots. Half were to be heated, and half not.

How to heat the plots? Harte hit upon the mechanism while at dinner in an outdoor restaurant in San Francisco. There he noticed the overhead heat lamps that repelled the chill fog of evening. Searching through farm equipment catalogues, he settled on a product from Pennsylvania designed to warm piglets and chickens during winter.

Harte decided to heat the ground a steady 2° Celsius, with no variation for seasons, hoping to mimic “the relatively constant infrared flux from the great big heater in the sky, otherwise known as incremental greenhouse gases.” The heat dried the surface soil 15 percent to 20 percent, moisture being an important part of this investigation of global warming effects.

All 10 plots had a mixture of woody shrub, or sagebrush, and forbs, the latter being broad-leafed herbaceous plants. Think of sunflowers, primrose and mountain bluebells. All plots had four times as many forbs as sagebrush covering the ground when the experiment began.

The ratios were nearly upside down by year 27 of Warming Meadows: Shrub production had become three times greater than that of forbs.

Warming Meadows also documented another effect of warming temperatures. Replacement of leafy green plants to woody shrubs causes a shift in the albedo. Snow reflects light more, while a black rock absorbs the sun’s energy. Woody shrubs absorb more energy than the wildflowers, the equivalent of a 10-watt light bulb per square meter averaged over night and day during the growing season. That’s double the incremental energy absorbed as a result of the increased atmospheric carbon dioxide.

Effects of increased heat were not uniform across the plants, however. Shallow-rooted plants in the heated plots showed greatly reduced growth and symptoms of moisture stress. Deep-rooted plants showed only a weak response to the heat. This, Harte wrote in the book, suggests “changes in community composition as the planet warms.”

It gets more complex. The increased heat from the lamps accelerated the runoff of snow, lengthened the growing season and, in some cases, emboldened pathogens and herbivores. This effect was not universal, though. Some pests actually did better in cooler or later-melting plots, not so well with the incremental heat.

Even by 2014, Harte had concluded that Warming Meadows provided “a realistic preview of real global warming.”

Crucial, he went on to say, was the nature of the experiment: heated plots paired with unheated plots. Without the artificial stimulation, it would have been impossible to say exactly what caused the changes in the subalpine meadows above Gothic. Many other things are at work, including acid deposition from distant coal-fired power plants, more intrusion from cross-country skiers, plus dust blown from deserts of the Southwest. Also, there could be natural cycles in the dominance patterns of vegetation. The duality of the plots, heated and unheated, made clear the effect of temperature increases during coming decades.

Next week we look at what evolved from this initial global warming experiment.