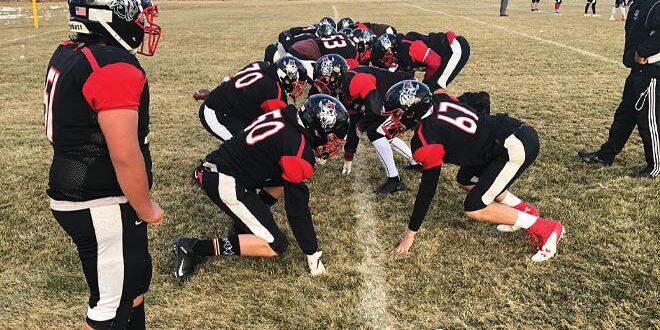 The Gunnison Cowboys high school football team continues to build momentum, reaching another milestone two weeks ago when they won their first varsity game in four years and look to close out the season with two more wins over the next two weeks.

It’s been a long road to get back on track and the commitment of head coach Jarrod Hinton and the players has made all of the difference. When Hinton first took the helm the players were small in both size and numbers, suffering numerous lopsided defeats in their varsity schedule.

Hinton pumped the brakes on the program and entered the team into two seasons of JV football to get their feet back under them.

Following the program’s success last year at the JV level, the team jumped back into a 1A varsity schedule this fall. And while the onset of COVID almost stopped them before they could even get started, football was allowed to proceed and the team now has a 2-3 record with two games remaining in the season.

“It’s been a rollercoaster this season but more ups than four years ago,” says Hinton. “Hopefully we can finish strong. Those three losses were to teams ranked in the top seven in the state.”

The Cowboys have suffered their fair share of injuries and issues with COVID, but with a roster of 35 players, including Dante and Nico Marchitelli, Kaden Kula, Jack Barnes and Gavin Fischer from the Crested Butte Community School, they still managed to play their full schedule.

Which is beneficial, since the team is still relatively young with not a single senior on the offensive line.
“We still got lots of strides to make,” says Hinton.

But their first win in four years was a big stride for the program.

“Obviously it was exciting,” says Hinton. “It felt like a huge relief and a huge reward for the guys who have stuck it out. After the game, everyone just wanted to sit there and be in the moment.”

It also led to another win for the Gunnison Cowboys the next week at home when they took down Paonia 51-8.
“We carried the momentum into the next week and played pretty good,” says Hinton. “It creates some buy-in and causes a shift in that mindset.”

While they dropped their game this past weekend to Hotchkiss, Hinton is looking for the team to rebound and get a win this Saturday at home against Olathe and then finish with another win against Del Norte.

“I feel like we can win those games,” says Hinton.

That said, there has been a recent uptick in COVID cases around the state, putting some programs on hold. Still, Gunnison will proceed as planned.

“We can’t do much else but practice and get ready to play,” says Hinton. “We’ve been lucky. Everything we’ve been doing in this county is working and we’re getting through it while others haven’t.”

Then there’s the recent weather, as storms have blanketed the fields in snow, with more expected later this week.
“We’ll just deal. We’re going to play,” says Hinton.

The only change they have to make, as of press time, is the location of the game. They’ve hosted their games at Mountaineer Bowl on the Western Colorado University campus so far this fall, since the one entrance at the gate allows for monitoring of numbers. But, with the recent outbreak of COVID on campus, facilities have been shut down, so the Cowboys will play at the high school field this Saturday at 1 p.m.

“I’m not sure what the numbers and capacity are going to be,” says Hinton.

In the meantime, there’s been no word from the Colorado High School Activities Association about stopping the season, so Hinton’s fingers are crossed they can finish it out.

“Everything is still going forward,” says Hinton. “It would be really good for us. Buckle up and finish the season.”
As for the future, things are looking good, as numbers at the middle school program are strong and they’ve had a successful season.

“Momentum is going in the right direction,” says Hinton.