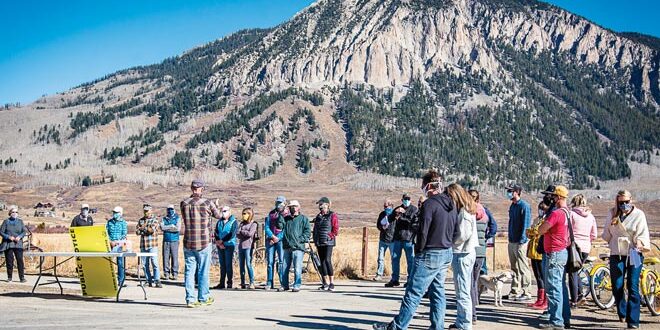 After several community meetings and stakeholder conversations, the Verzuh Open Space trail easement issue seems to come down to whether the priority should be reducing impacts to bird habitat or not adding more impact to a human neighborhood.

The effort now is to see if both could be accomplished with the relocation of trail easements across the property on the east side of Crested Butte that leads to Tony’s Trail.

A Zoom meeting was held November 4 and an onsite meeting at the end of Elk Avenue was held November 5 to gather public input on the matter. The owners of the 40-acre parcel, Wynn and Ryan Martens, brought a proposal to the town of Crested Butte to move the easement to the north edge of their property by the Rec Path bridge. The easement currently is located along the road that runs through the middle of the property and leads to 35-acre residential lots.

The Martens’ intent is to reclaim the wetlands on the property and protect nesting bird habitat. They have commissioned Western Colorado University to conduct a survey to better understand what bird species are present and the timing of their nesting seasons (the phenology). Their feeling is that by relocating the easement to the edge of the property—where there is already heavy human activity—the birds will benefit.

But the proposed location on an old roadbed that would lead to the McCormick Ranch bridge and back to the road to Tony’s Trail would start in the Paradise Park neighborhood. The residents there are worried that the increase in pedestrian and bike traffic will negatively impact the area that they feel is already overcrowded, especially in the summer.

Crested Butte community development director Troy Russ has been facilitating the public and stakeholder meetings. He told those gathered on the road at the November 5 meeting that the town is looking at the situation to perhaps take a new, holistic view of how the east end of town could work better.

“A lot of things have changed since the year 2000 when the property was annexed to town,” Russ said. “Is there an opportunity now to think through some things, given those changes?”

Russ told the two dozen members of the public at the outdoor gathering that the Martens were consciously trying to be environmental stewards of the property by protecting nesting habitat, using restorative grazing practices and restoring wetlands. “We are on the same page as them when it comes to climate action and environmental stewardship,” he said. “The staff is not on the same page when it comes to potential neighborhood impacts, potential loss of access and parking issues.”

“We asked the town to start this public process. We are open to how to balance the human needs and wildlife and habitat,” said Ryan Martens. “We are open to ideas. Think of this as the beginning of the process to find the best solution.”

“There a lot of different layers at play here,” agreed Wynn Martens. “We are attached to improving the property and there certainly can be negative impacts with people as we have seen with the numbers, and their dog’s impacts on the birds. We want a sustainable solution. We welcome and want constructive conversation.”

Russ said a wildlife study was wrapping up and Ryan indicated that about 25 species have been identified on the property.

Several people who use the current easement said the bird population seemed to be doing fine and had actually increased over the years.

Russ said he has been told by the scientists conducting the wildlife study that birds see humans—not vehicles—as potential predators, so pedestrians present more of a bird impact than even heavy traffic.

The Martens said human impact on birds can spread out between 100 to 300 yards along the road, depending on the species. “Existing research indicates that human impact spreads in all directions at distances that vary depending on the species and the specific context. Magpies can live undisturbed on your front porch, for example,” Wynn explained. “The blue herons on the Slate have a much different response to humans. Pat Magee has used the 100 to 300 yard range when describing impact. He told me yesterday that a non-scientific, conservative estimate for our setting is 50 meters.”

In a planning exercise held for the community members, it was clear that the top three values were 1) maintaining a livable small town with a rural feel, 2) keeping a sense of community and 3) maintaining access to recreation and the outdoors.

Russ made clear the town staff believes the easement cannot be taken away and said the Martens are not suggesting that. They want to relocate, not eliminate, the easement. They have said, however, that under the original annexation agreement a wildlife closure period could be implemented from May into July. Russ said town staff believes that applies only to the southern boardwalk area and not the main easement along the road.
Amy Nolan said she felt the Martens had been unfairly characterized to the community. “I feel like this issue turned into an us-versus-them matter from the beginning. That’s not fair,” she said.

“Part of the issue is that the proposal started with threats of closing all the easements,” responded Mike Horn.

“And that is what we are trying to address,” said Russ.

When it came time to brainstorm concerns and solutions, what seemed to be the biggest common concern was “placing one family’s well-intentioned desires over the well being and livability of a large group of families that live in town.”

While the timeline calls for the Town Council to consider the matter at its December 7 council meeting, several people suggested waiting to look at the matter until the upcoming “Community Compass” comprehensive planning project is completed in 2021.

As it stands, Russ will continue to meet with the Martens and stakeholders to see if the original proposal could be modified to take in the concerns expressed over the last several months. The idea is to then bring the proposal in front of the Town Council in December.