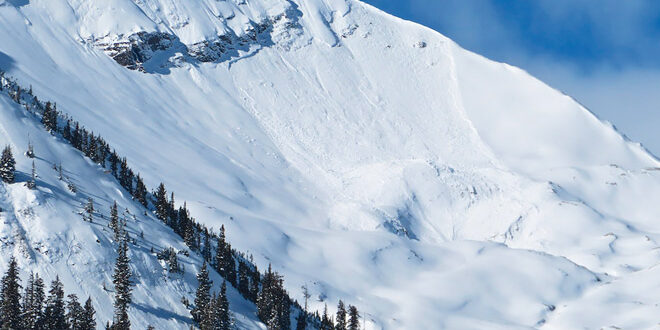 It has been a newsworthy week in the avalanche world. And unfortunately, it hasn’t been good news. On Friday and Saturday, there were four avalanche fatalities around the West. Three of those were in Colorado. On Friday, a local skier was buried in a large slide in the Anthracites, about 10 miles west of Crested Butte. On Saturday, two skiers were killed by an avalanche near Silverton. Any avalanche fatality is tragic, but losing Jeff has really been a heavy hit for our small town. His constant smile at trailheads and on the skin track will be missed.

The dangerous snowpack certainly hasn’t been because of large or unprecedented storms: our local snow stations are at 60 percent to 80 percent of average right now, and you can still see dirt on some slopes near town. No, it’s not dumping out there. Yet we’ve had over 260 avalanches reported in the past two weeks, 55 of those were human triggered. Why the avalanche tyranny?

The problem is because we have an incredibly weak setup at the base of our snowpack. Colorado is notorious for having weak basal layers, but this one is especially fragile, behaving worse than any layer I’ve ever seen. The setup came from a shallow early season snowpack with a low-density snow surface paired with an unusually prolonged dry spell. These conditions in November and early December conspired to make a very weak and faceted (or sugary) layer of snow across all but the sunniest aspects throughout our forecast area.

That persistent weak layer started getting buried on December 10. It didn’t take much snow to create touchy conditions. On December 12, we issued a Special Avalanche Bulletin and saw widespread natural avalanche activity with the first 12 inches to 18 inches of snow on that layer. Small storms since then have slowly been thickening the slabs without providing a knockout punch.

The snow and wind loading events have been enough to keep a few naturals going every day, but more concerning, a constant stream of human triggered avalanches. Many of these have been remotely triggered. Remote triggering is a surprising characteristic of persistent weak layers: it means that you trigger the avalanche from a location other than the part of the slope that avalanches. You can collapse a weak layer on low angle terrain and the failure will connect to a steeper slope or adjacent to you. We suspect the avalanche fatality in the Anthracites involved a failure that propagated up the slope to where the slab was thicker and the slope was steeper.

Thus, people are getting surprised by the remote triggering potential of this weak layer, and also by how reactive it continues to be throughout quiet weather or small storms. During lulls between storms, we often see the snowpack quiet down and avalanche activity wane, but this layer continues to surprise us with how consistently it keeps collapsing under slabs that are now 1 to 3 feet thick or more. I see a period of stormy weather on the horizon around New Year’s, and if that transpires, I expect we’ll see another surge in avalanche activity. The size of avalanche activity will only get larger as we put more snow on top of that layer.

So what can you do? Start by reading our daily avalanche forecasts, at www.cbavalanchecenter.org. Our website has the most current conditions and travel advice for backcountry users. Remember that even some of our popular snowshoeing, cross country ski tours, or snowmobile routes cross under avalanche paths, so even if you don’t have an appetite for steep terrain, you should check the forecast and be alert for natural avalanche activity coming from above.

Even when avalanche conditions are scary, you can always avoid avalanches by careful terrain selection. Avalanches occur on slopes steeper than 30 degrees—that equates to a black diamond at the ski resort. If you choose terrain that isn’t on or below steep slopes like that, you can have a safe day no matter how dangerous conditions are.