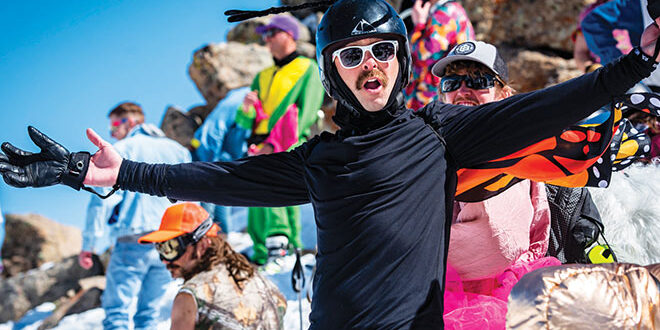 Ben Blackwood set the bar another notch higher in the sports world when he won his ninth Snowblades Extreme title on Saturday, April 3.

Blackwood took some time from his hectic post-title schedule for a quick Q&A with the Crested Butte News to offer some insight into his athletic ethos, Oprah Winfrey, as well as some advice for others striving for greatness.

How’s it feel to be back on top?
In the slowly pronounced words of Edward R. Rooney, Dean of Students at Ferris Bueller’s high school… ‘Nine times…’
About two months ago, my dad died unexpectedly, and I’m dedicating this championship to him – Dr. John S. Blackwood. He’s the reason I became the blader I am. When I was 3 years old, he put me on some really short skis in the majestic mountains of Wisconsin. At the time, I thought he did that because I was just a little kid, but I now realize he had me on those short skis with the plan of turning me into the greatest goddamn snowblader in history. Mission accomplished, Dad. He was also quite fond of using the word ‘goddamn,’ so that seems like the appropriate way to express that.

Was the loss of the title, and cancellation last year, your biggest motivation?
With the pandemic going on, it has been an extremely challenging year for many people. I don’t know if anyone struggled as much as me, though, because I had to wait a whole extra year for the opportunity to win this championship again. I had it written on my calendar last year: ‘WIN BELT BACK.’

When the event was cancelled, I felt lost and confused. In a moment of clarity, I finally realized my path forward. Along with my usual training regimen of excessive alcohol consumption, women and overall debauchery, I decided I needed to hit the gym and step up my training. I know most people are probably thinking, ‘Hey, wait a minute, Ben Blackwood. Aren’t you already super ripped with chiseled muscles and maxed out on the sexiness scale?’

While that’s all completely true, I just needed something to focus on. The great thing about crushing beers, tequila, and bourbon Old Fashioneds while lifting weights is that you often forget how many reps you’ve done and end up doing more than you had planned, which just makes you stronger. Since I don’t really care for running, I’d get to a blackout state before heading out on the trails, so I wouldn’t have to remember doing it. I did wake up in some strange places on a few occasions, though. One time, I somehow ended up at Oprah’s house in Telluride. She was cool about it once she figured out who I was. It turns out she’s a huge fan, so I autographed a framed poster she has of me on her mantle before making my way back to Crested Butte. Nice gal.
I heard a small group of dedicated bladers, including Alex Mattes-Ritz and Lawson Yow, actually made the trek up to the Headwall last year even though the competition was cancelled, and I respect that. Alex apparently won, which would make him an unofficial champion, but let’s be honest. If I had been able to attend instead of sitting at home recovering from COVID-19 at that time, we all know there would’ve been a different outcome. Maybe Alex can be called Champ Lite, Diet Champ or Half Champ.

Take us inside your head when you were standing on top, waiting to drop.
As I stood up top waiting for my time to shred, I was blown away by the level of blading this year. Young guns like Kye Matlock, Seve Petersen, Max Shull and Gus Bullock are moving their way up the ranks, but I’m optimistic I should be able to hold them off for two to three more decades. Montana Wiggins, who was the runner-up this year, has already been all over social media stating that he is aiming for me. This guy has serious potential, but there’s still much for him to learn. If he approaches it right, there’s a lot a snowblade god like me can teach him. When the time comes to pass the torch, I might be looking Montana’s way, but I plan to keep a firm grip on that torch for now.

Take us inside your head once you won your ninth title?
This ninth Snowblade World Championship has me feeling overwhelmed with gratitude. I want to give thanks to two-time champion Adam Westlake for being the genius to create this event, two-time champion Grant Spear for holding onto my belt with class and honor for the past couple years, Jimbo Webb for always sending it to win yet another Jeremy Worrell Sickblade Award, and to Eric and Mark Schumacher for keeping this the most highly-organized competition out there.

My new sponsors – Yee-Haw Pickles, Montucky Cold Snacks and Pit Viper Sunglasses – have all been incredibly supportive. I also want to thank multi-year tele-blade champion Mark Robbins for pushing my blading to the next level year after year and Drew Cesati and Allison Yeary, as well as my attorney and life coach Joe Pat Forward, for the daily inspiration. I couldn’t have done it without any of them. Well, I probably could have since I’m so naturally gifted, but I thought it would be a nice thing to say.

What advice do you have for athletes, young and old, who strive for greatness, or just want to win dodgeball in gym?
To all the athletes out there, young and old, who strive for greatness, I have words of wisdom for you. Keep reaching for your goals, no matter what gets in your way and never give up! Unless your goal is to be as amazing as me. Because that is never going to happen. In that case, you should probably just give up.