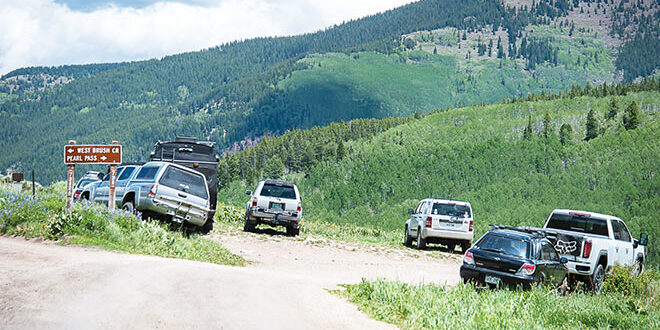 And designated camping is the new normal

Public lands managers are already braced for another busy summer in the backcountry, and multiple entities across Gunnison County are working in collaboration to inform people of changes from dispersed to designated camping while also preparing people to make backup plans. But questions of how to manage camping overflow and how to market the north valley‘s recreational opportunities without overwhelming the system remain challenging to answer.

Starting this summer, only designated camping will be allowed in the Slate River and Washington Gulch drainages. The same transition will be made to the Gothic, Kebler, Brush and Cement Creek drainages by the end of the year.

Several early indicators like USFS campground reservations and visitor inquiries are showing a high likelihood that the heavy backcountry traffic of 2020 will repeat itself. But fewer available campsites in both the Slate River and the Washington Gulch areas might create some new crowding in other areas even as those are also being transitioned to designated camping only.

Reservations full since early March
The reservation system for campgrounds within the GMUG and Bureau of Land Management (BLM) is 99-percent full, according to GMUG public affairs officer Kimberlee Phillips. That represents 1,534 total reservations for 26 campsites beginning July 15 and running for 59 days through Labor Day. Six additional sites are first-come first serve.

Phillips noted that the Lake Irwin campground is the top destination for occupancy and experienced a 300-percent increase in visitation last year. “It’s currently almost completely reserved for the 2021 summer season,” says Phillips.

GMUG district ranger Matt McCombs told the Crested Butte council Monday that his office has seen a “steady drumbeat of interest” from visitors wanting to camp in and around Crested Butte this summer.

And while no new sites across the district have transitioned to reservation-only this year, that is likely to happen in the future.
“Currently the Gunnison Ranger District is in dialogue with the Rocky Mountain Regional Office to figure out the best way to advance the community-based fee proposal developed by the Sustainable Tourism and Outdoor Recreation (STOR) Committee into the formal review process. This type of renewable funding, should it be approved, will be key to unlocking the potential for reservations at designated sites around Crested Butte as managing recreation at that level is resource intensive,” says Phillips.
Meanwhile, the days of local dispersed camping are likely over after the summer of 2021, driven by the development of the STOR committee and USFS designated camping project.

From dispersed to designated
“The North Valley drainages experience some of the highest use of anywhere on the GMUG,” says Phillips. “The stunning beauty and world-class recreation amongst the mountains and valleys that drain into the East, Taylor and eventually the Gunnison River combined with easy access to the towns of Crested Butte, Mt. Crested Butte and City of Gunnison have us squarely on the map for destination camping and recreation for visitors from all over the country.”

The popularity of north valley camping has led the Crested Butte Conservation Corps (CBCC) and STOR Committee to collaborate with the GMUG to transition the six major drainages in the north valley to designated camping only, rather than the free-range, dispersed camping formerly available. The idea is a more sustainable backcountry experience for users and reduced resource damage.

STOR contributed to the costs of the camping project with Great Outdoors Colorado grant dollars, and the Gunnison Stewardship Fund, a funding mechanism managed by the National Forest Foundation, has also contributed $150,000 to the project. The USFS partnered with the CBCC to install the infrastructure for the designated sites.

Immediately starting in the spring the Slate River and Washington Gulch drainages will be under the new “camping in designated sites ONLY” label. Those are all first-come, first-serve campsites and represent the majority of the most popular and often used sites in the north valley.

The CBCC took on the project last fall and completed 43 designated sites in the Slate and 48 in Washington Gulch with signposts, parking spaces and fire rings. The final touch is coming this spring with additional road signs guiding people to the designated sites.

“That’s going to be ready going out of the gate,” says Nick Catmur with the CBCC. Catmur is working with a crew of seven other men to finish the designated sites project this summer, and is finishing a Masters in Environmental Management through Western Colorado University.

As soon as the Washington Gulch and Slate River signs are complete, Catmur says his crew will move on to Brush Creek, Kebler Pass and Irwin to decommission old dispersed camping sites and create designated ones. After those areas are done, the crew will move on to Cement Creek and Gothic. “The goal is for that all to happen this year, even if we put the last fire ring in on October 1 and it snows 2 feet the next day,” says Catmur. “We plan to have designated camping only across all six drainages ready for May 2022.”

Overflow planning
Catmur says he fully expects there to be a transition period as people adjust to the new rules, and the CBCC, STOR Committee and Tourism and Prosperity Partnership (TAPP) are working together to prepare campers as best they can for the expectation to plan ahead and create backup plans for camping in the north valley without a reservation in the summer.

“This is a challenge that we have been discussing a lot, in our committee and the STOR committee. I think there will be more opportunity in the other drainages, and we are working on signage,” says Catmur.

“We expect record numbers of visitors as folks continue to see public land recreation as a safe and renewing activity in the midst of a global pandemic. Campers should not expect to easily locate a site arriving late in the evening or on a weekend in the drainages around Crested Butte,” says Phillips. “To assist campers, the district in partnership with the STOR Committee, TAPP and the chambers in both Gunnison and Crested Butte are advising visitors to have a “Plan B” if they intend to visit and camp in historically high-use areas like Crested Butte or the popular Hartman Rocks area near Gunnison managed by the BLM. This may involve travelling a good distance to find a drainage or area with available dispersed camping opportunities and campers need to be mentally and emotionally prepared for this eventuality, especially if they get a late start.”

John Norton, TAPP executive director, says the TAPP is focused on getting the word out, and points to recent statewide media coverage on the new designated camping in Gunnison County, which he attributes directly to TAPP outreach efforts.

Looking at the long term
In regard to whether the valley in general and TAPP specifically should actually discourage or at least cease advertising local camping, Norton responds that camping visitors make their own financial contribution to the local economy and should not be written off.

“We are less discouraging campers and more advising prospective campers that they should have a Plan B if a favorite campsite is occupied,” he says.

“My family has always loved camping and so have many families who live here. I have a hard time wrapping my head around campers being inherently bad, but there’s only so much camping a place can take. And it’s not as if campers don’t spend money in the valley. Living up Cement Creek we observe daily a 6 p.m. flow of vehicles down Cement Creek Road, and a 9 p.m. flow up the road. I don’t think those people are sight-seeing,” he points out of the likelihood those campers are headed into town for dinner and drinks, and possibly shopping.

Everyone seems to agree the long-term plan should help even out the impacts to the local backcountry and in time a new way of managing campers will provide relief.

“We will have headaches this summer and are doing our best to minimize them. In 2022, when we anticipate a reservation system will be in place, those headaches should abate to a great degree,” concludes Norton.

Catmur has encouraged an overflow lot for the short-term and/or a large additional campground in the north valley as one of his final project recommendations. “As we see how things play out, I think we are exploring options where we could offer overflow… the only problem is someone has to foot the bill. I think it would really help to have a larger campground in the Crested Butte area, but from a funding standpoint I don’t foresee that happening anytime soon,” he says.

More information on the progress of the designated camping project can be found by visiting https://crestedbuttemountainbike.com and https://gunnisoncrestedbutte.com.