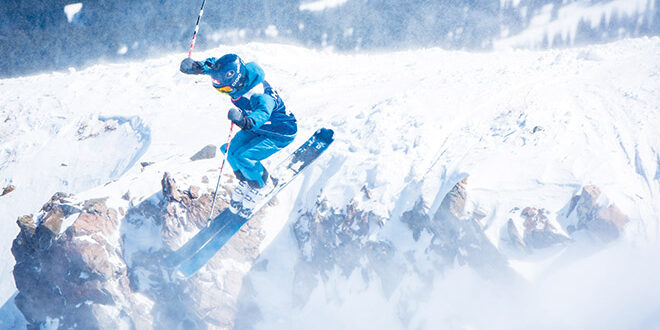 The Crested Butte Mountain Sports Team (CBMST) athletes and some local independent riders wrapped up their 2021-competition season at the Rocky Mountain Freeride Series (RMFS) regional championships Wednesday, March 31 and Thursday, April 1 at Breckenridge. In the end, 24 CBMST athletes qualified for the championships with 21 making the trip to Breckenridge and came home with a number of top finishes.

It’s been a tricky season for the freeride athletes with competitions either cancelled and/or rescheduled but the CBMST remained on point throughout it all as they continued training and mixed in competitions when possible.

“Everyone made the best of it and we were able to see some big time progression from the athletes inside and outside of competition while at the same time focusing on keeping everyone safe,” says head freeride coach Will Dujardin. “One of the benefits of fewer comps this year was more preparation on the home hill with coaching. I think our athletes benefited greatly from more time with coaches working on fundamental technique and building experience in T-Bar terrain.”

The kids came into the championships on fire following the event here in Crested Butte and a couple more competitions with some top notch finishes the weeks leading up to regionals.

“We had a bunch of podiums and strong results to get athletes into the Rocky Mountain Freeride Series Champs,” says Dujardin. “The CB regional certainly set the tone for March Madness as athletes built on their success and pushed themselves on different venues around the region. The athletes were fired up and showcased the hard work they put in this season to make it to the regional champs.”

Gus Bullock capped off the season with a win at the RMFS Champs at Breckenridge in the 15-18-year-old male ski division while Ella Haverkampf had the top result among the older local girls, placing seventh.

“He (Gus) did the biggest 360 of the day amidst some really amazing skiing from other competitors,” says Dujardin. “Ella Haverkampf had one of the bigger airs in the 26-strong 15-18 ski female field with powerful skiing in the run out, putting her in seventh.”

Meanwhile, the youngsters were on fire in Breckenridge as CBMST snowboarder Teagan Turner won her snowboard division and independent skier Atalaya Hausdoerffer won her age bracket on skis. Brie Polster, Ty Nolan and Marin Gardner all stepped onto the podium as well.

“The progression from the 12-14-year-olds and the consistency they showed was just amazing,” says Dujardin. “The CBMST has graduated a bunch of really talented athletes in the last two years but the next generation is here to build off the previous athletes’ success and it shows.”

While national events are unavailable due to COVID protocols, the season was still a success for all athletes given the circumstances.

“Everyone made the best of it and we were able to see some big time progression from the athletes inside and outside of competition while at the same time focusing on keeping everyone safe,” says Dujardin.