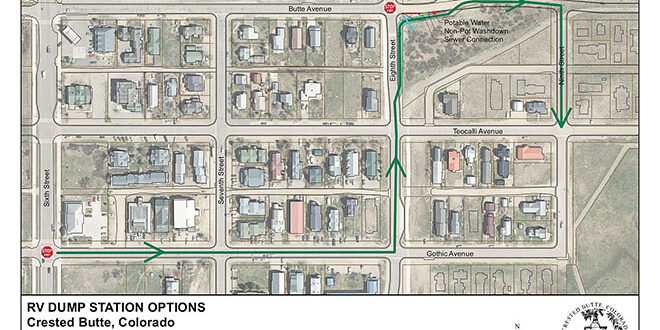 Crested Butte will have an RV dump station open to the public, after all, this summer. In a reversal of its previous decision, the Crested Butte Town Council on Monday, May 17, voted unanimously to reopen the town’s RV dump with some temporary changes to traffic flow in and out of the station. Citing new knowledge that the county’s dump station will be closed this fall for upgrades and an outpouring of community and stakeholder input that the dump is a vital part of the local backcountry user system, town council members agreed to a temporary, two-season opening while addressing both neighborhood concerns for the increased RV traffic in the area. Council also wanted to ensure that a long-term location change for the dump is forthcoming.

The dump will reopen around Memorial Day and remain open for a period of two summers. Then the dump station will sunset at the end of the summer season in 2022, and in the meantime will operate with a queue lane along the east side of Eighth Street that accommodates up to six large RVs. The council agreed that a set of wayfinding signage, traffic calming measures and a higher suggested donation fee will be included.

More than 100 people joined the council’s Zoom meeting for the agenda item on Monday, and after a staff presentation of four possible traffic flow alternative plans, council weighed in on their preferences and opened the meeting to public comment. All commentary was appreciative of the council’s willingness to revisit their April 5 decision to close the dump, and there was close to an even split among council members and nearby residents regarding two of the alternative plans (1A or 2A). After some robust discussion, council voted in favor of Alternative 1A, which will cost town an estimated $3,500 and can be implemented immediately, aiding in Memorial Day weekend readiness.

The new plan uses a temporary barrier to create a controlled access point to enter the station, and a new queue lane on northbound Eighth Street between Teocalli and Butte Avenues. The exit will remain the same as previously set up, allowing multiple choices to depart the area from Ninth Street. There will be some minor construction work to grade and compact the new queue lane on Eighth Street, since it is not on a paved roadway.

Community development director Troy Russ said at the discussion’s outset that collecting traffic data would be important if traffic calming measures were on the table, so the decisions could be made objectively rather than setting a precedent for other busy areas such as Peanut Lake Road and the neighborhood around the Crested Butte Community School.

Crested Butte town planner Mel Yemma said that the public feedback coming in for the past couple weeks has been mixed. “We’ve kind of seen equal feedback on both sides for each alternative,” she said.

Resident Kent Cowherd spoke in favor of 2A, which would create a temporary, seasonal one-way configuration on Butte Avenue between Eighth and Ninth Street heading westbound only. Cari Freeman, who owns the Crested Butte RV Resort, spoke in favor of re-opening, effective immediately. “The campers are already arriving,” she said.

“Kat C.,” a resident of the neighborhood, said she liked option 1A or 1B.

JD Crichton had concerns with Plan B that would create a one-way traffic flow.

Suzanne Pierson said as a former RV owner she liked 1A or 1B and cared more about long-term plan for moving the dump to another location out of a busy neighborhood.

Council all agreed re-opening the dump was the right thing to do for a temporary measure, but they also had a split in which direction to take.

Councilmember Chris Haver said he leaned toward 2A, and said he wanted to add monitoring cameras, white stripes at the stop signs and that the two-year sunset was important.

Councilmember Will Dujardin strongly supported option 1A, and said he thought that putting in a one-way on Butte Avenue was a bad idea and hadn’t been vetted among neighbors.

“We would just be hearing from everyone again that this new option was not presented until the days leading up to this meeting,” he said.

Councilmember Mona Merrill said she liked either 1A or 2A, both of which were simpler, temporary changes at the lowest cost.
Mayor Jim Schmidt preferred 2A, and didn’t think the temporary one-way would be an issue but that with Option 1 RVs would be circling around the block and congesting traffic.

Town staff explained that implementing a pay system at the dump might take several weeks to have in place and cost $45,000, while historically the dump receives about $7,000 to $8,000 in donations each summer. All agreed to save the money and simply raise the suggested donation from $10 to $15.

After more council discussion of whether to choose Option 1 or Option 2, Mitchell made a motion to reopen with Option 1A, with an increased suggested donation of $15 for use of the dump, and adding video monitoring to collect traffic data, white striping at the stop signs and a two-year sunset for the dump station. Merrill seconded, and asked if the town staff could revisit the traffic plan later if there were unintended consequences.

“A lot of these decisions that we make seem so monumental we feel like we can’t revisit… I definitely would want staff to monitor with their cameras,” she said. Others agreed.

Dujardin asked if speed bumps could be added to the motion, but Russ suggested using pop-up speed limit signs first before adding speed bumps, and council agreed that would suffice to start with. All council members voted in favor.

Schmidt said the long-term plan was most important. He acknowledged that all potential solutions for a new location seem to have problems, but that action must be taken.

County commissioners Jonathan Houck and Roland Mason were on the call and encouraged council members that they would support the search for a new RV dump location elsewhere in the North Valley.

“There is no clean silver bullet here, some other potentials are starting to at least show themselves enough that we should run them down and see what they look like…I think having a timeframe, having a clear understanding of where you sit, really does help drive action within the community,” said Houck.

District ranger Matt McCombs from the Forest Service Gunnison District said the USFS wants to be a “key partner” in finding a solution for the service, acknowledging that the bountiful public lands around Crested Butte attract much of the need for an RV dump. He said he believes the local stakeholders, especially in relation to the Gunnison County STOR (Sustainable Tourism and Outdoor Recreation) Committee, can “have the right facilities in place to meet the demand that we see ever-increasing.”

“I hope the STOR committee digs their heels in,” commented Schmidt, after the vote. “I don’t want to see this go into the fog machine.”