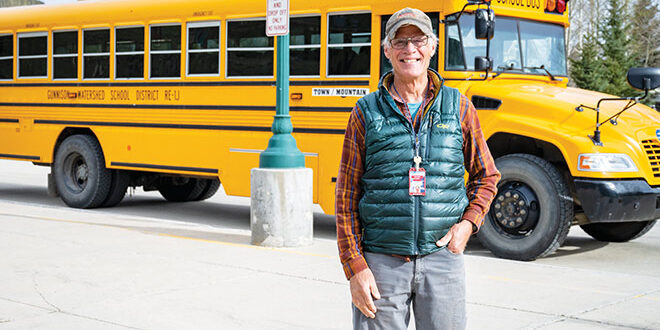 Bill Kastning, making the wheels of the school bus go round and round

The kids kept bringing him back…but now who will step up?

When Bill Kastning retires this Friday, June 4, from his long-time position as school bus driver for the Crested Butte Community School, he’ll leave a big hole in not only the hearts of parents, students and the community but in the realm of transportation of local school kids. Kastning began driving the CB children in 2013, right after he retired from the Gunnison elementary school, where he taught from 1994. “They jumped on me right away,” he laughs about his hiring, “because they knew I had a commercial driver’s license from Alpine Express.”

Kastning had signed on with Alpine Express when it was still Crested Butte Taxi. “My beginnings of driving people around in buses started in 1987 – 34 years. That’s a long time,” he muses and explains that the Alpine job he held was mainly to supplement his teaching income.

“Instead of getting a Masters degree, as every other teacher does, I just plugged away, working every weekend driving tourists from the airport, from skiing and weddings and I did the 4×4 tours.” He and his wife Carol were working extra to ensure their kids could get to good colleges. “We wanted our kids to be able to leave town for school and with the high cost of living here, it required both of us to have summer jobs.”

In addition to miles, Kastning has racked up a lot of great times and memories with his student passengers, like the time he drove the hockey team to Vail in a snowstorm. “Little Blue Canyon was completely blocked for hours because of a snowslide. Ben Reaman got out of the bus and walked alongside on Highway 50 so I could back up for a mile until I could finally find a place to turn around. The state patrolman, who was there helping, was also the father of one of the kids on the bus. We went back to Gunnison and over Monarch instead, which was a piece of cake.”

“Bill is the man,” confirmed Reaman. “Billy (Watson) and I were stoked when Bill was our bus driver. He’s the one person in the whole country who can drive a school bus in a blizzard over mountain passes and no one worries. Even with that giant detour he got us to the game on time.”

Every year, Kastning would think about doing something other than driving, but his love for the the kids kept him returning. “The biggest thing that really kept me motivated to show up every fall was the older kids and driving all the sports, watching them compete. I was always their biggest fan and their biggest cheerleader. It was fun watching them progress in their skill levels in their individual sports. The most memorable thing was watching the high school soccer team win the state championship in Denver, watching them have a lifetime memory happen right in front of my eyes.” The team even included Kastning’s name on the trophy. “Before the game, we went to a secondhand clothing store and the team was gooning it up with straw hats and Hawaiian shirts. Then I drove them to play miniature golf. It was a stroke of genius for Than Acuff and Bob Piccaro to come up with that concept so the kids wouldn’t get nervous.”

Kastning expresses concern for the future of transportation for the CBCS kids and worries about the school district being able to find drivers to replace him. But he feels retirement was no longer an option that he could put off at 74 years of age. Despite that his health and reflexes are still excellent, he notes that aging can affect that and safety is always the main concern of a bus driver. He also felt that losing so many close friends this year was part of the impetus to retire.

There’s a nationwide issue, he says, for finding bus drivers. “There are school districts across the nation who are giving up on transportation. They are now literally expecting parents to drive their kids to school, rural places who don’t have the funds, or families who live like 10 blocks away.” One of the reasons for the driver shortage is wages and Kastning explains, “It also breaks up your day and without pay for in-between the routes, you have to make up for it with extra curricular activity trips,” where, he says, you can get a lot of hours. “We used to have local CB bus drivers. I was the only local for the past nine years. All the others came up from Gunnison because of the lack of affordable housing. The cost of surviving up here is impossible for a bus driver. You’re getting like four hours in so you can’t afford to live in Crested Butte.”

But Kastning says, “I didn’t ever think of the pay as the motivating factor, it was a community service. The check I got was a nice supplemental income but it’s nothing you can live on. I did it to help the community.”

Kastning says that the school board is doing some heavy strategizing on how to get bus drivers and that this fall, they’ll be making difficult decisions about school transportation. “They’re contemplating other means of transportation to get kids from CB South. There’s already a huge traffic issue in the mornings. During COVID-19, parents were driving their kids, which made it worse.”
With all the free time he’ll now have, Kastning is looking to stay connected to the community kids in some way. “I might volunteer to be a mentor or I might get on a non-profit to help in the community. I’ll be looking around because although some people can retire effortlessly and go right on to doing their hobbies, I’m just not one of those people. I would love to team up with somebody fun like Than Acuff and help him out with the teams.”

When you dedicate almost a decade of your life to something you love, retirement is usually bittersweet. “I have a mix of sadness and nervousness, because I don’t do well when there’s not something to do when I get up in the morning,” he concludes. “I’m trying to think what my next move is. The sadness is saying goodbye to the kids. Seeing a mom or dad hug their kids and put them on the bus is one of my favorite heartwarming memories. I just so appreciate the many thank you’s from parents and kids, the gifts, the conversations, the kindness. It’s a really heartwarming thing that’s unique to CB.”