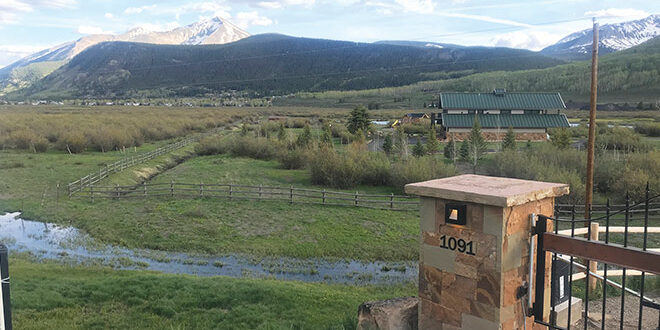 After a gradual increase over time in how big of a residence one can build within Gunnison County, commissioners have said they are ready to consider lowering that maximum residential allowance in the Land Use Resolution (LUR).

The potential LUR changes were an agenda item on the June 1 county commissioners meeting, and all three commissioners indicated to county staff that they would like to begin the process of reconsidering the current regulations. The LUR allows 10,000 square feet maximum for a residential building and 12,500 square feet maximum total for all primary and accessory buildings combined on an individual legal parcel.

The discussion has come in response to a large new application in the Slate River corridor named Wandering Willows, for a 9,984 square foot house and 2,189 square foot detached garage for an aggregate square footage of 12,173 square feet. The county’s building department has not yet reviewed that application, but has reported an increase in “larger, fancier” home applications coming in this year. More than 1,500 constituents have signed a petition calling for a moratorium on residential buildings within the Slate River corridor and the formation of a new special use area to restrict further development there.

However, it appears a moratorium or a declaration of any special use area might not be the county’s first choice. Commissioners agreed that they would prefer to look at the county as a whole, rather than divvying it up into segments. They did say it might be possible later to designate special areas after an initial, more comprehensive guideline was established.

Commissioner chairperson Jonathan Houck said it is important to manage people’s expectations. “I think there’s a misunderstanding of what a board can and cannot do,” he said, regarding the Wandering Willows application.

“The [board of commissioners] has received an immense amount of concern and public input about development there at the Slate River, and we have been taking that in,” he said. But he said they are somewhat limited in their ability to discuss it as an active application.

County attorney Matthew Hoyt went through the legalities, reviewing that a moratorium can normally only last six months (under state and federal law), and that an active application must be processed under the current LUR.

Community development director Cathie Pagano joined commissioners and provided a memo on the current LUR and history of how it came to allow increasingly larger houses.

According to her memo, when the LUR was adopted in 2001 the maximum allowed for residential building size was 5,000 square feet, with no specific limitation on the size of a detached secondary residence.

In 2003 an amendment was passed in response to a group called Citizens for Economic Revitalization who, Pagano was under the impression, felt the residential size limitations were having a negative economic impact in the Gunnison Valley and discouraging development. The amendment changed the residential size limitations to allow for a maximum of 9,000 square feet and a maximum of an additional 1,000 square feet of attached garage. The aggregate square footage maximum was increased to 12,500.

Even if a site plan exceeds 10,000 square feet of primary residence or an aggregate of 12,000 square feet, the LUR provides an application process for someone to ask to exceed that maximum.

There have been four applications since 2018 that were larger than 5,000 said Pagano, and four since 2007 that were greater than 12,500 square feet. One is in White Pine, one is up Ohio Creek, one is in the Roaring Judy area and one is at Bear Ranch on the other side of Kebler.

“So it hasn’t been a huge issue,” she said. “But anecdotally, my staff did say this summer they are seeing bigger, fancier homes being built.”

Pagano also reviewed how an amendment to the LUR would work now.

“If we receive direction from you then I would prepare an amendment language and a report. I would take that to the planning commission and they would discuss it in at least one work session…and then make a recommendation to you all, to the board of county commissioners,” she explained. “Then we would schedule a public hearing to discuss that—any proposed amendment. And then you have the opportunity to review and take action.”

Commissioner Houck said he was ready to dive right in. “I really think it’s important for us to revisit this issue,” he said. “We are clearly hearing it from the community. Those are the folks who have been concerned about what does the future look like with building on this scale?

“To me, looking historically…these kind of really large structures wouldn’t be completely banned but it would require a different level of review and some new thresholds that would be set,” he said.

Houck also mentioned the county’s strategic plan for containing development in and around the towns, and maintaining corridors and open space. He suggested that bringing the maximum down from 10,000 square feet to within 5,000 to 6,500 square feet “is a place I’m very comfortable with.”

Commissioner Roland Mason agreed. “I’m in favor of reducing the square footage as well. I would like to maybe have the planning commission weigh in with some recommendations on where they see that fit in.” He noted that “there are two sides to this,” and would expect to hear from realtors, contractors and developers as well.

Commissioner Liz Smith also agreed, “Seeing how those square footage maximums have escalated over time, and where we are now with the public response, it’s appropriate,” she said.

“I’d like to see this initially applied county wide, and then we work back towards, are there areas with such unique needs that we look at them?”

Pagano also spoke to the problem with initially focusing narrowly, and “playing whack-a-mole” with different areas. “There are a variety of places in this county that are really special and really sacred to a variety of different people. And that may be the Powderhorn, or White Pine or Ohio Creek or the Slate River Valley.”

Mason also asked about the moratorium proposition, and Pagano said that is a policy decision and up to the commissioners. “It’s no small thing,” she added.

Several people joined the meeting and spoke during public comment, thanking commissioners for responding to their concerns and supporting the process of lowering the maximum residential square footage.

Emily Artale, a Crested Butte resident who runs Lotus Engineering and Sustainaibility consulting firm in Denver, said this is being considered across towns and counties throughout the state. “I’m excited that you are taking a look at this; you are on just the same track as so many other communities,” she said.

Former commissioner Jim Starr said he appreciated them taking a stance, and encouraged the county to take it a step further and tighten restrictions on wetlands, proximity of large buidings together and how much glass is used in home-building.

Sue Navy and Tim Szurgot emphasized the importance of the Slate as an eventual special use area. “We understand and agree that all corridors are important,” added Szurgot.

The county staff will, as directed, bring a draft to commissioners and begin an extensive public engagement process.
“We get to good decisions with that robust process of public feedback,” said Houck.

Share
Previous CBMBA opens season of trail work this weekend
Next Bill Kastning, making the wheels of the school bus go round and round