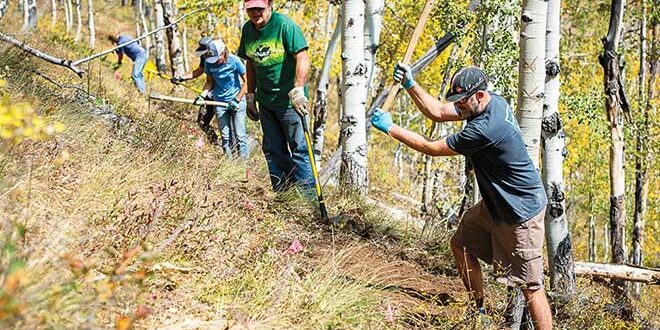 The Crested Butte Mountain Bike Association (CBMBA) opens the 2021 summer season officially this weekend with their annual kick off party on Friday, June 4 followed by a day of trail work on Saturday, June 5 coinciding with National Trails Day.

The annual kick off party will be held at the Crested Butte dirt jump park behind the Crested Butte Community School and starts at 4 p.m. with their annual member meeting including some words from USFS district ranger Matt McCombs. CBMBA director Dave Ochs encourages the people, members or not, to join in as it is open to the public.

“The hope is people will come see what we’re up to. Learn some things and have their voice heard,” says Ochs. “We want the people’s comments.”

Once the clock hits 5:30 the party begins with pizza from Mikey’s Pizza and beer from Ska Brewing. It’s also an opportunity to check out and purchase the new line of CBMBA merchandise and enter for a chance to win prizes from CBMBA sponsors.

“We want to connect to the Fenceline Trail so we can connect Upper Cement to Lower Cement,” explain Ochs. “To connect those would be huge. It’s an amazing opportunity to connect the network and make it function better and a better experience for all non-motorized users.”

While one component of CBMBA’s work the past several years has been trail connectivity, another big part to help facilitate connectivity has been to get trail users off the roads for safety sake.

“Roads like Cement Creek road are just getting busier every summer,” says Ochs.

The work will start where they left off the last time heading from the new section of the Middle Cement Creek trail up-valley toward Fenceline and include moving the Fenceline Trail.

“We want to move the trail onto National Forest land,” says Ochs.

CBMBA hopes to knock out over a half-mile of trail on Saturday and then finish the project during their overnighter in August.
“If we can get another 6/10ths to 7/10ths of a mile done we’d be in a good spot,” says Ochs.

But it’s not going to be easy with the planned trail going through some pretty rugged terrain.

“There’s nothing easy about this part,” says Ochs. “A lot of really dense vegetation on a steep hillside. It does offer awesome views.”
CBMBA is asking for volunteers to meet at a campsite six miles up cement Creek Road by 10 a.m. on Saturday and parking is extremely limited so they are asking people to carpool and/or ride their bikes some if not all of the way to the meeting spot.

They will wrap work up by 3 p.m. and then all of the volunteers are invited to gather for a BBQ and more Ska Brewing libations compliments of CBMBA. Details and a list of what to bring can be found on CBMBA’s events page at cbmba.org.