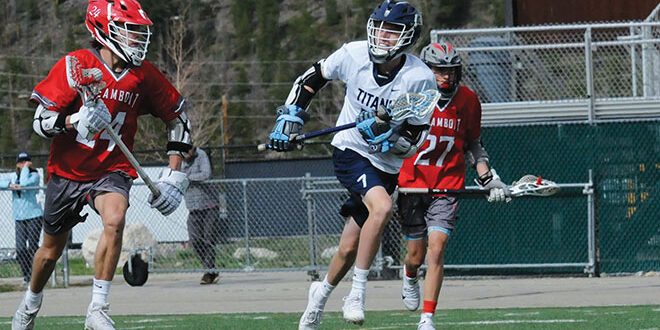 After getting the sweet taste of victory two weeks ago, the Crested Butte Titans lacrosse team continued its winning ways with two more wins last week over the Summit County and Montrose JV teams.

In just their first year of existence, the Titans lacrosse team is required to play JV teams as they build their program and they are starting to find their rhythm despite roster struggles with several players stepping into new roles with each game.

“These guys have no problem picking up a stick and playing wherever we need them,” says coach Buck Seling.

They headed back for a rematch with the Summit County JV team on Wednesday, May 26 with just 15 of their 22 players and a new goalie standing between the pipes in Logan Briener. Yet, despite the depleted roster, the Titans rolled to a 10-2 win. Kody Bodine led the team with five goals while Brendan Hartigan racked up five assists.

“We kind of overpowered Summit,” says Seling. “We had excellent play from Kody and Brendan Hartigan was just all over the place.”

The Titans then joined forces with Summit for a second game against Steamboat Springs. While the mix of teams did have its struggles and they fell to Steamboat 11-4, Ace Gaither and Blue Gardiner each scored while Hartigan tallied two more assists.
“It was a little bit of a challenge but at least the boys got to play,” says Seling.

The Titans then headed to Montrose on Friday, May 28 still missing players for a variety of reasons. This time the Titans faced a far stronger opponent and were put to the test only to pass it with a 6-4 win.

With numbers down to 14 players, temperatures reaching the mid-80s and facing a Montrose team with a deep bench, Seling made some pre-game adjustments in strategy.

“During warm ups the energy just wasn’t there,” explains Seling. “Our plan was to just be more patient on offense.”

While things were looking grim prior to the opening face off, the Titans got a massive boost in confidence as they jumped out to a 3-0 lead. As the game wore on though, the Titans started to war down and Montrose surged in the fourth quarter to cut into the Titans’ lead.

Up just 5-4 with two minutes left, Seling called a play for Bodine and Crested Butte connected to set up Bodine and he scored to seal the 6-4 win.

That was a great win for the players that were there,” says Seling. “I was really proud of their effort.”

The Titans return to the road once again for two games in Grand Junction on Saturday, June 4 and will continue to work with what they have as more players will be missing the games with others returning to the fold.

“We’re trying to make do with who we have,” says Seling.

The Titans will then get to play at home when they host Glenwood Springs on Tuesday, June 8 at 1 p.m. at the Crested Butte Community School field. They follow that with three more games before the season closes.

“For us to finish with 12 games when we had no schedule at the start of the season is a miracle and big thanks to Jarrod (Hinton),” says Seling.