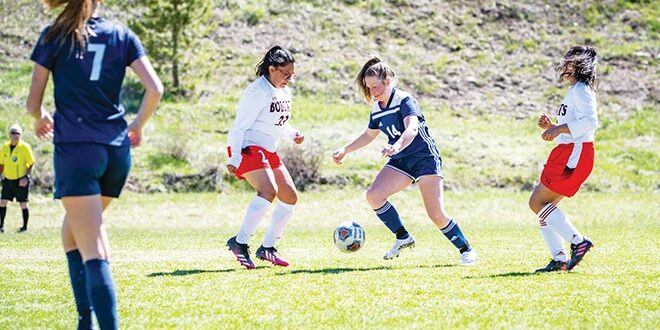 “So much is still up in the air”

The Crested Butte Titans soccer team headed into last week with eight seniors, most of who are varsity starters, missing from action. As a result, coach Julia Kidd called on several JV players to step into varsity roles, and vice versa, forcing the players available to crank out four games over two days. Once it was all over, they ended up splitting the two varsity games cruising to a 10-0 win over Ignacio on Tuesday, May 25 before losing 2-1 to Buena Vista the next afternoon.

Kidd knew Ignacio was having a tough season and that the game would be relatively uncontested. As a result, the focus, as always, was on trying to get her players to play at a quicker pace as well as getting a look at some JV athletes and how they would mesh with the varsity squad.

“Ignacio was better than Center so it felt a bit more like a real game,” says Kidd. “We practice a lot together so it wasn’t a big step and the JV players looked good.”

The Titans started off the game immediately on the gas pedal pressing high into the Ignacio Bobcats’ half and keeping the ball there to open up numerous shots. Ellie O’Neal opened the scoring five minutes into the game when she slipped past a Bobcat defender and drilled her shot past the Ignacio goalie. Five minutes later Maddie Bogart struck from just outside the 18-yard box. O’Neal tallied her second goal of the afternoon at the 14-minute mark and then Leigh Harpel picked the upper corner from 20 yards out for a 4-0 Titans’ lead.

Crested Butte continued to work on possession play trying to find the right mix of pace for the challenge in front of them setting up a direct kick just outside the penalty area. Nicola Roberts took the kick and punched it past the Bobcat goalie and 10 minutes later Harpel netted her second goal of the game for a 6-0 Titans’ lead at halftime.

Crested Butte continued its scoring ways in the second half as Morgan Feltus broke free down the flank to cross it into Campbell Ryan for another goal.

Roberts scored her second goal of the afternoon 10 minutes later, and Nevada Scales put the Titans up 9-0 in the 60th minute.
Alex Engel has the final say of the game. After wreaking havoc up top to set up several chances on net, her hard work ultimately paid off as she fired a rocket past the Ignacio goalie to put Crested Butte on top 10-0 forcing the officials to call the mercy rule and end the game.

That same team then lined up again soon after to face the Summit County JV and found a much more competitive opponent yet still came away with another win.

The next day the team headed to Buena Vista for two more games and found a worthy opponent in the Buena Vista varsity. Again, Kidd suited up a mix of JV and varsity players for the match with the seniors still gone.

“Without the seniors we’re pretty much missing our entire back line and our forwards,” says Kidd.

Buena Vista opened the scoring in the eighth minute but Crested Butte answered right back two minutes later when Harpel struck once again. Buena Vista eventually stepped back into the lead and held on with Crested Butte having one goal called back and missing several other chances.

“Pace-wise it was more typical soccer,” says Kidd. “It’s that switching from real slow to real fast soccer that causes some discomfort and we were missing that senior leadership out there. It’s still fun to play a tough game and a real heartbreaker.”

The Titans are now on the homestretch for the regular season with four games over the next week. The four-game stretch is highlighted by a rematch with Telluride on Friday, June 4 at the Crested Butte Community School at 3:30 p.m. It’s also Senior Night so the eight seniors will be recognized for their commitment to the program during the game.

Speaking of the seniors, the Titans girls team now heads into totally new territory with graduation last week and the season still continuing on, including the state tournament, leaving the question as to what seniors can and will continue to play.

“It’s pretty weird to keep playing soccer through the end of the school year,” says Kidd. “We’ll see where we are after the Telluride game and if we get into the state tournament. A lot of it is ‘we’ll see.’ I can’t want it more than them.”