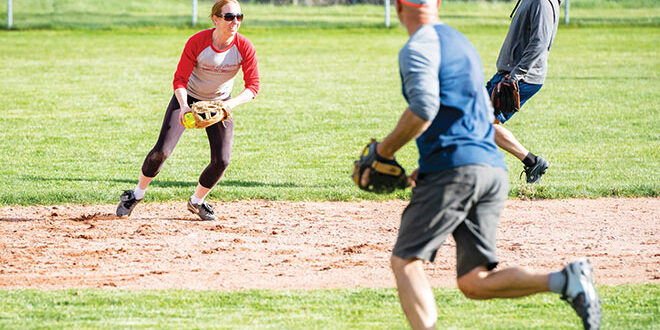 “That two beer warm up didn’t treat me right”

Sure, we had softball last summer but there’s something different about this year. It’s softball unmasked. Back to the good old days when you can high five, spit and swill alongside your teammates. I, for one, don’t necessarily think we’re completely out of COVID country as COVID country is about to come to us in droves this summer. But until then, PLAY BALL!

And that’s just what they did Tuesday, June 1 at Gothic Field as newcomer team Walk of Shame was introduced to the league by Elevate with a 33-9 thumping in the 2021 season opener.

Team Walk of Shame (great name by the way) is not necessarily new to local softball as individuals, but when the Avalanche disbanded, players reached out via Facebook to get a team together for the season. And what a relief at the thought of a positive outcome from Facebook conversations rather than one I read just last week that went something like this:

“Hi, we’re headed to your area for Memorial Weekend and wondered some good places to ride our side-by-sides.”

One response early on went something, actually exactly, like this.

Well, we want the Walk of Shame in the league and there is hope, there’s always hope. And let’s not forget, the very team that trounced them Tuesday night, Elevate, had a similar experience in their first season or two in the local leagues so, like I said, there’s hope.

A quick tutorial on some of the rules prior to the game for some Walk of Shame players had me skeptical but I saw they had a core group of players to build around and they came out red hot in the top of the first inning scoring five runs off hits from Ralph Landi, Jodine and Mike Pahl and Tadd “Pole” Mertens.

But you also need some defense in softball, strange I know, and Elevate exploited Walk of Shame’s confusion on defense to the tune of 10 runs.

It all started with Christian Allen’s lead off solo inside the park home run (ITPHR). Paige Rumery and CJ Hoover followed with base hits and scored when Liz Wigginton knocked a two RBI double. Sam Reaman then jacked a two run home run, Hannah Crofut crushed a tomahawk triple to deep left field, Jared Martin drove Crofut in with a triple, Brent Chambers cracked a high-flying two-run shot to center, Allen poked another solo ITPHR and Wigginton finished the outburst with a RBI single forcing the umpires to enforce the 10-run rule.

The next few innings would proceed accordingly as Elevate continued to tack on runs but Walk of Shame kept plugging away. Like any good walk-of-shamer would. My teeth may be furry, my memory blurry and I may have no sunglasses but dammit, I’m gonna get home and eat my roommates’ eggs while he’s at work.

Joe Lockwood and Landi each stroked base hits and Jodine poked a single to shallow center to push them both home. But when Jodine took off on a ground ball two batters later, she collided with the shortstop covering second base and blood ensued.
Nevertheless, some bench triage stopped the bleeding and Jodine returned to her spot at first base drawing cheers from both teams and the eight or 12 fans there.

Then a green 1996 Subaru Outback drove by cranking bluegrass, go figure. Walk of shame? How about drive of shame. Let’s pause while I get on Facebook and comment on that and watch the comments ensue. Let the hate flow through you.
Speaking of Facebook comments, my favorite comment still to this day is when the anger is flowing and someone chimes in with “Is this still available?” Show stopper for sure.

Despite Jodine’s heroics, it did nothing to stop Elevate from racking up more runs including another 10-run inning to which one Walk of Shame player said, “Now I know what walk of shame means. When the other team scores 10 runs, you have to walk back to the bench.”

The bludgeoning continued and Grant Spear, RJ Spinella and Matt Savard got in on the scoring fest.

Still, Walk of Shame did no such thing as they continued to remain focused on the big picture with plenty of season ahead of them. Mertens knocked a base hit and scored off a single from Tyler Grimes in the top of the fourth inning. Jodine connected for another RBI base hit in the top of the fifth inning and Maggie Chlipala chased down a foul pop from behind the plate to make a grab in the bottom of the fifth inning.

So there’s that, but there wasn’t nearly enough of that for the Walk of Shame as Elevate knocked in a few more to close out the win. And, perhaps, open the conversation of a title for Elevate. It’s early and there’s plenty of good teams between them and the title, but if I could just reach the end of the arc of this storyline I’ve been milking since they entered the league going from worst to first, I might just retire and…yeah right.