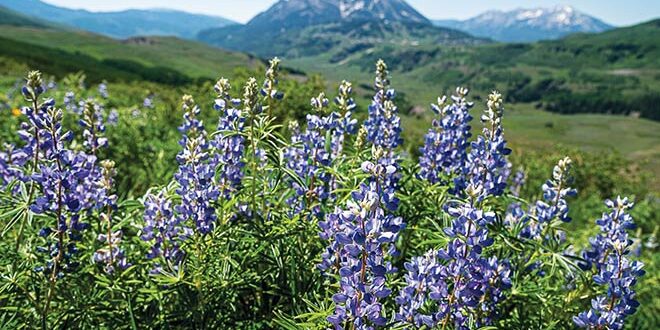 Embrace the substance over the style…enjoy the Fourth!

This summer will be a tad more stressed as a housing shortage for local workers will make things rougher for those coming here on vacation. I guess one piece of advice is that those here for a good time should slow down…because there really won’t be much choice. There could be times that it might take an hour to get a table where you can order a meal that might take an hour (maybe eat a snack before going out to dinner). I guarantee you everyone here is doing his or her best and the only recommendation that might help is to accept the current reality — slow down and appreciate what is here. That’s part of our high mountain culture.

There is no need to rant on Facebook or growl on Instagram. Look a little deeper and be grateful to be in a pretty, albeit, busy place in the mountains. Appreciate the substance of this place. Drink in the popping flowers, the trails to nirvana, the art, the music, the incredible views. It is the Fourth of July holiday after all and if there is one historical document that drips of substance, the Declaration of Independence might be it. Honor that idea.

Just imagine if the style over substance culture was the norm in 1776. The four or five loudest voices on Facebook might have derailed the Declaration of Independence. The social media “crowd” that never seems to take a second away from the screen lest they miss an opportunity to point out someone’s shortcomings in the most churlish of ways would have been banging that “elitist” group of writers. They would have repeatedly pointed out that the “supposed” Declaration wasn’t real and if it was, it’s only because Q wrote it first! What the heck is meant to be “created equal” anyway when it comes out of the mouth of an ignoramus hypocrite like Thomas Jefferson? And what “Life, Liberty and the Pursuit of Happiness” means to you means the opposite to me! And I’m always right! Blah, blah, blah.

The Facebook trolls would have ranted it out of existence or at least solidified an opposition that would have called for a ‘strike’ to do ‘something’ because anyone with a different view deserves to be pummeled.

Other online influencers might have quickly trademarked the Declaration and traveled the world reciting the most popular parts on spectacular beaches. #unalienablerights. Follow ‘Political Bands’ on Instagram. Snapchat the Founding Fathers.
Thank goodness the culture then, while certainly not perfect, was one of thought and reason. Today the politics at most any level too often feels oh so thin, flashy and glossy.

I think Republican Mitt Romney nailed it when he said last weekend that the former president’s bluster over the “Big Lie” was like a page from the World Wrestling Federation. “It’s entertaining, but it’s not real,” he observed.

“And I know people want to say, yeah, they believe in the ‘Big Lie’ in some cases, but I think people recognize that it’s a lot of show, and bombast. But it’s going nowhere,” he noted, while pointing out that no credible sources have vouched for Trump’s claims of election fraud, which he was spouting even before the election and on election night.

I mean the MyPillow guy and towering legal mind Rudy Giuliani are certainly know-it-alls and it is amazing to me that serious judges and Republican-led investigations keep missing the obvious corruption when it comes to the “Big Lie.”
But seriously, falling into shallow celebrity style talking points that undermine the institutions of this really doesn’t help the good ‘ol US of A.

There will always be those that believe they are patriots because of conspiracy theories that are never proven. January 6 showed that could be dangerous. Having a former TV reality show celebrity (and former president) pushing the “Big Lie” without a shred of proof could be one more chip in the foundation of a great 245-year experiment.

On a lighter celebrity note…
If anyone or anything deserves a chartered flight to the rich-and-famous destination resort and cricket mecca of Gothic, Colorado, it is a yellow-bellied marmot that survived a long trip to Phoenix, probably hidden in the underside of a car. Yup, a marmot named Fork was captured near Mesa, Arizona last week and tracked back to Gothic. So the Arizona Game and Fish Department flew Fork back on Tuesday and she is happily wandering free among her marmot and scientist compatriots near the Rocky Mountain Biological Laboratory. It’s good to be a celebrity marmot in this country.

What it isn’t good to be is a local dog that is afraid of fireworks this weekend. Normally the Fourth of July is the day when the most pets run away because of the unexpected (to them) explosions celebrating American freedom. This year the day of fleeing pets in the valley will likely be Friday when the Mt. Crested Butte fireworks show will take place a bit after 9 o’clock. So be aware and put the pooch inside with some white noise and something to take the edge off.

Here’s hoping that some of the edge comes off for everyone this holiday week. Again, we know the valley will be overly busy and understaffed this month. We as a community are asking that everyone show a little patience and grace. There’s not much that can be done at the moment. So go a little deeper than feeling frustrated and rushing to your screen to share that frustration with your 836 ‘friends.’ Instead, remember you are on vacation (or else living in a vacation destination). Take a breath, slow down from the pace you are used to and enjoy what is here. You’ll honestly appreciate it a lot more and so will those working hard to help you.

That’s part of our culture. Embrace it and you’ll be welcomed…Happy Fourth everyone.