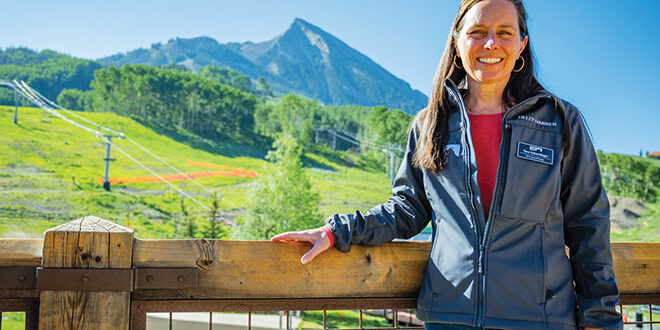 Schoedinger began her new role at CBMR on June 7, but she is no stranger to the Vail Resorts team. Schoedinger first joined Vail in 2010 and led the launch of EpicMix’s photo, racing and academy function. In 2016, she helped lead the integration of Whistler Blackcomb into Vail’s portfolio and she has served as director of chief marketing officer projects and as chief of staff for the Mountain Division.

However, Schoedinger’s leadership experience spans beyond the ski industry. Up until her first day on CBMR soil, Schoedinger was mayor of Jamestown, Colorado, a 250-person town northwest of Boulder. During her nine years as mayor, Schoedinger led her small community into recovery following the 2013 flooding. The flood hit her community hard – all roads were cut off and lives were lost.

Schoedinger organized an airlift to get the people up from the creek and into secure places in Boulder. “My initial focus was the safety and well-being of my community,” she says. According to Schoedinger, 10 percent of the homes in Jamestown were completely destroyed from the flooding.

Following the tragic event, “It was really important to get people back in the community as quickly as possible,” she says. “My focus was on reconstruction of our community’s infrastructure and helping to connect our community members with resources to rebuild their properties.”

During her time as mayor, Schoedinger found that collaboration played a critical role to the success of her community and she plans to carry that over into her new position in Crested Butte. “I learned the importance of partnerships and partnering closely with all of those entities to support their goals and support our common goals,” she says. “The key to [Jamestown’s] success of our recovery was partnering with external entities. I’m looking forward to meeting and partnering with all of [CBMR’s] community partners.”

Though she’s lived in Jamestown for the last 20 years, Schoedinger says that Crested Butte is the only other place she can imagine living. She spent time skiing Crested Butte during her college years at the University of Colorado – Boulder and also visited the valley in previous summers to camp and bike.

Schoedinger is thrilled to join the CBMR team, and notes what a huge success the team had this past year in being able to offer guests a mountain experience during a pandemic. “I’m really excited for the opportunity to get to live and work in such a special place. I’m super thankful to all our employees in preparing the resort for our summer operations,” she adds. “I’m excited to get out with our ski patrol and mountain operations team.”

Schoedinger is also the first female general manager in CBMR’s history. “It’s a huge honor for me and it’s an example of how Vail Resorts is leading the way with diversity.” Schoedinger notes that four out of five of Vail’s Colorado resorts are being led by female leaders, and 44 percent of Vail’s corporate board members are women. During the 2019/2020 season, CBMR hired on Tessa Dawson as its first female ski director.

This summer, Schoedinger’s initial goals are to support the team, get to know the staff and to help guests feel welcome. “I’m honored to be in this role and I hope to continue to do what this team has been doing,” she says. “My priorities here are to continue to support the positive experiences for our guests and our employees that the team here has been able to deliver on.”

Former vice president and chief operating officer Tim Baker sings his praises for Schoedinger. “I know Tara very well, and I’m very confident she’s going to be a natural fit in moving forward with CBMR. She wants to be in Crested Butte and she is stoked to be here. She understands what it means to be part of a community and she’s going to integrate herself into the community,” he says. “I’ll encourage her to build relationships with the key stakeholders out in the community and ultimately, she’s going to find all the same reasons of incredible pride that I have in the CBMR team and everything we’ve accomplished together. I have every confidence that she’s going to fit right in and lead this resort into the future. I’m excited to see CBMR thrive in the future.”

So far, Schoedinger has enjoyed some perks as she gets better acquainted with CBMR. “The views from this mountain are so spectacular, I can’t get over the view,” she says.

Schoedinger loves to ski and bike, and she’s looking forward to camping and stand up paddle boarding this summer, along with meeting more people in her new home. “I’m really excited to get out on some bike trails both on the mountain and elsewhere in the community,” she says. “I’ve received a warm welcome from people in the community I’ve had the opportunity to meet so far and I’m looking forward to meeting more people here.”

As far as favorite ski runs, “like Rambo,” she jokes, “I’m excited to ski all of them and to learn more about this incredible place.”